Docuseek, a streaming video platform of high quality documentary films,  is showing its support  for continuing education during the COVID-19 crisis by offering 12 films for free online streaming starting today through May 1. The theme of all 12 titles is sustainability centered around the 50th Anniversary of Earth Day and includes new films as well as popular classics. The first documentary film to be screened is How to Let Go of the World and Love All the Things Climate Can’t Change by Josh Fox. Traveling to 12 countries on 6 continents, the film acknowledges that it may be too late to stop some of the worst consequences and asks, what is it that climate change can’t destroy? What is so deep within us that no calamity can take it away?

Visit and bookmark https://docuseek2.com/earthday for the full schedule of the Earth Day 2020 Film Festival. Check out my commentary on  Lilly’s Twitter.

Don’t worry if you miss a date, you will be able to access films released on previous days until May 1st. For more online viewing, check out the Duke Libraries’ streaming video* offerings of subscription and licensed films.

*Note: access to these titles are limited to current Duke students, staff and faculty.

Oh, the places they have gone!

Our Lilly Collection Spotlight shines on talented Duke Alumni including authors, broadcasters, researchers, as well as many who are accomplished in popular entertainment – both on screen and behind the scenes. Their studies while at Duke are varied, and for many, their majors were not directly related to their career. The featured books encompass a range of genres and styles – from sociological research to critically acclaimed fiction to sports journalism. Duke alumni working in film and television produce and appear in a variety of films including comedies, drama and thoughtful documentaries. Actors, directors, writers – they experience success both in front of the camera and behind. What they all have in common is their “Duke experience”.

Check out the entire list of books in the Lilly Collection Spotlight  and visit Lilly Library to view the exhibit Duke Alumni on the Screen and Behind the Scenes.

Among the Duke Alumni  Books in the Collection Spotlight:

Vinegar girl : The taming of the shrew retold

Pulitzer Prize winner and American master Anne Tyler’s inspired, witty and irresistible contemporary take on one of Shakespeare’s most beloved comedies. Tyler graduated from Duke in 1961.

The Legends Club : Dean Smith, Mike Krzyzewski, Jim Valvano, and an epic college basketball rivalry
In the skillful hands of John Feinstein (Duke 1977), this extraordinary rivalry–and the men behind it–comes to life in a unique, intimate way. The Legends Club is a sports book that captures an era in American sport and culture, documenting the inside view of a decade of absolutely incredible competition.

Dollars and sense : how we misthink money and how to spend smarter
Bestselling author  (Predictably Irrational) and behavioral economist Dan Ariely  (PhD Business 1998) teams up with financial comedian and writer Jeff Kreisler to challenge many of our most basic assumptions about the precarious relationship between our brains and our money.

This is a richly illustrated and researched cookbook that explores the distinctive cuisine of the area known prior to 1948 as the Gaza District–and that of the many refugees who came to Gaza in 1948 and have been forced to stay there ever since. In summer 2010, Laila El-Haddad  (Duke 2000) and Maggie Schmitt traveled throughout the Gaza Strip to collect the recipes and shoot the stunning photographs presented in the book.

Forever Duke: On the Screen and Behind the Scenes

Accompanying the books in the Collection Spotlight, the current exhibit in the Lilly Library foyer is Forever Duke: On the Screen and Behind the Scenes. The works of Duke alumni filmmakers, writers and actors featured  include films and series found in the Lilly Library collections. A few of the more well known titles or personalities:

We Were Soldiers
Directed by Randall Wallace (’72) Wallace wrote and directed We Were Soldiers. Nominated for an Oscar as screenwriter for Braveheart, he also worked on films such as Pearl Harbor and The Man in the Iron Mask.

Community and The Hangover

Ken Jeong (’90) was a premed student at Duke.  A licensed physician, Jeong found fame in comic roles in both television and film.

Other Duke luminaries include actress and Baldwin Scholar  Annabeth Gish (’93) who stars in the current X-Files, Martin Kratt (’89), the co-creator of the beloved children’s series Zoboomafoo and Wild Kratts, Oscar and BAFTA nominee cinematographer Robert Yeoman (’73) , film editor Alisa Lepselter who has worked on Woody Allen films such as Midnight in Paris and Match Point, and documentary filmmakers Ryan White (’04) and Rossana Lacayo (’79).

The Duke campus and Durham have also been featured in film and television; productions include Bull Durham, The Handmaid’s Tale (the film), The Program, Main Street, Iron Man 3, Kiss the Girls, Brainstorm and the late 1990’s  coming-of-age television series Dawson’s Creek.  Whether it’s American Pie 2,  Mystic Pizza, The Squid and the Whale or Parks and Recreation, you will find a Blue Devil!

Opening Round Recap and Results

There was lots of action in the 1st Round of Lilly Library’s March Movie Madness brackets. Looks like “The Dude” was “Blind Side-d”, Caddyshack may have what it takes to be a Cinderella story, the Karate Kid “waxed off” Hoosiers, and Talladega Nights did a “Shake’n Bake” all over the Field of Dreams.

It’s never too late to join in March Movie Madness @ Lilly, so make your picks of the remaining contenders!

See you in the Elite Eight!

What’s the best sports film of all time?

Lilly Library has 100s of sports films – ranging from iconic classics such as Rocky to quirky films like Shaolin Soccer to searing dramas such as Creed. In fact, we have so many sports films, we decided to select just 64 (sound familiar?) for our very own Lilly Library version of March Madness. You may not agree with our title selections (does that also sound familiar?), but don’t let that stop you from joining in the fun and having a chance to win a Crazie great PRIZE!*

To vote, visit our 64-team Lilly Library March Movie Madness online field. Round two is now open for voting here!
To record your selections, vote for your choice of Heavy Hitters in Bracket A versus films that Go the Distance in Bracket B to eventually face those films that are Down to the Wire in Bracket C opposite the Full Court Press of Bracket D. Voting dates are listed below and on the contest page.
Updates will be posted in Lilly Library’s lobby  and on Lilly’s Facebook, Instagram and Twitter accounts in addition to our blog, Latest@Lilly.

Only votes submitted via Lilly March Movie Madness count.
Want a copy of the brackets just for fun? Download here.

*Did someone say PRIZE?

Participants who provide their Duke NetID and vote for the sport movie “champion” will be entered into a drawing for a Crazie fan grand prize!

There was lots of action in the 1st Round of Lilly Library’s March Movie Madness brackets. Looks like “The Dude” was “Blind Side-d”, Caddyshack may have what it takes to be a Cinderella story, the Karate Kid “waxed off” Hoosiers, and Talladega Nights did a “Shake’n Bake” all over the Field of Dreams.

Some movies are so iconic that they are more suitable for the Hall of Fame. If you are wondering what great movies (and maybe not so great) did NOT make the field, check out the bench-warmers here at March Madness – On the Bench.

At Lilly Library, now that it’s time for The Big Dance –
we hope you join in! 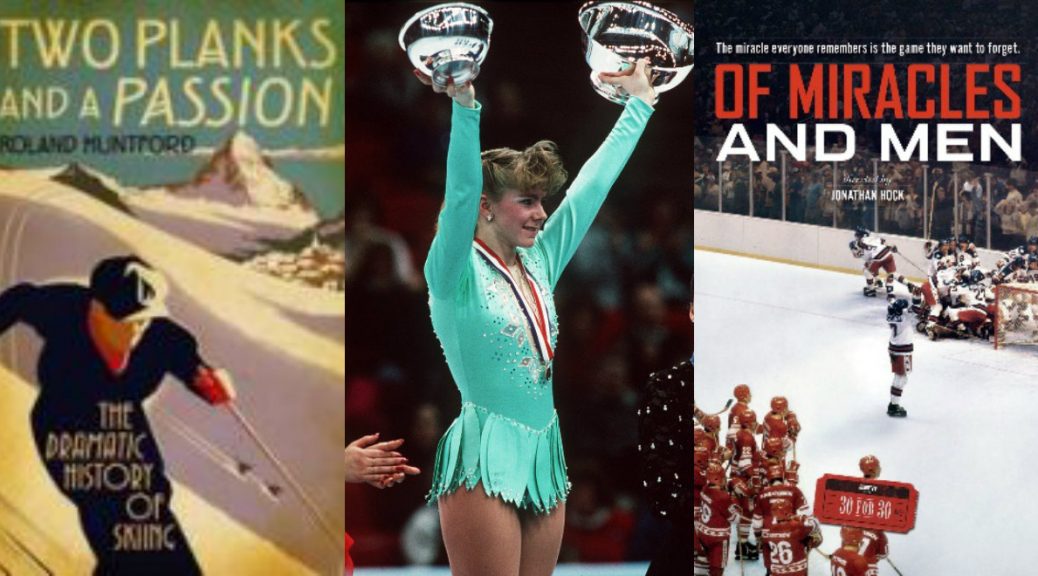 Each spring since 1998, Durham has hosted international filmmakers and film lovers who flock to the Full Frame Documentary Film Festival. Festival goers revel in the latest in documentary, or non-fiction, films which are presented in venues throughout historic downtown Durham.

Because it is the 20th anniversary, this year’s festival’s thematic program is a cinematic retrospective of the twenty years of Full Frame. Curated by Artistic Director Sadie Tillery,  notable films, filmmakers, and special moments that have distinguished Full Frame since it was founded in 1998 are to be highlighted this year.

Do you know that Duke University is a major supporter of Full Frame?
Of special note, because of his support and commitment to the arts, Duke University President Richard Brodhead will be honored with the Full Frame 2017 Advocate Award.  In addition, the Duke University Libraries support and highlight films from past festivals.   If you don’t attend the festival, consider the Libraries’ collections.  A major resource is the Rubenstein Library’s Full Frame Archive Film Collection, that includes festival winners from 1998 through 2012.  In addition, the film and video collection at Lilly Library on East Campus contains a selection of Full Frame titles available to the Duke community.

It’s that time of year again!

Each spring, international filmmakers and film lovers flock to the  Full Frame Documentary Film Festival to experience the latest in documentary, or non-fiction, cinema showcased in our very own historic downtown  Durham.  Film showings highlight new programming in competition, and other events include expert panel discussions and themed screenings. Tickets go on sale April 1st.

Duke University Libraries support and highlight films from past festivals.  One resource is the Full Frame Archive Film Collection,  that includes festival winners from 1998-2012.  The film and video collection at Lilly Library includes many more Full Frame titles available to the Duke community.

This year’s 19th Annual Full Frame Documentary Film Festival  honors independent director and documentary cinematographer, Kirsten Johnson, with the 2016 Tribute Award.  Cameraperson, Johnson’s newest film,  will be screened and a retrospective of her work will be presented.   This year’s Thematic Program is a series titled “Perfect and Otherwise: Documenting American Politics,” curated by filmmaker R.J. Cutler, known for such films as The War Room and The World According to Dick Cheney.

The festival is a program of the Center for Documentary Studies and receives support from corporate sponsors, private foundations and individual donors whose generosity provides the foundation that makes the event possible. The Presenting Sponsor of the Festival is Duke University.