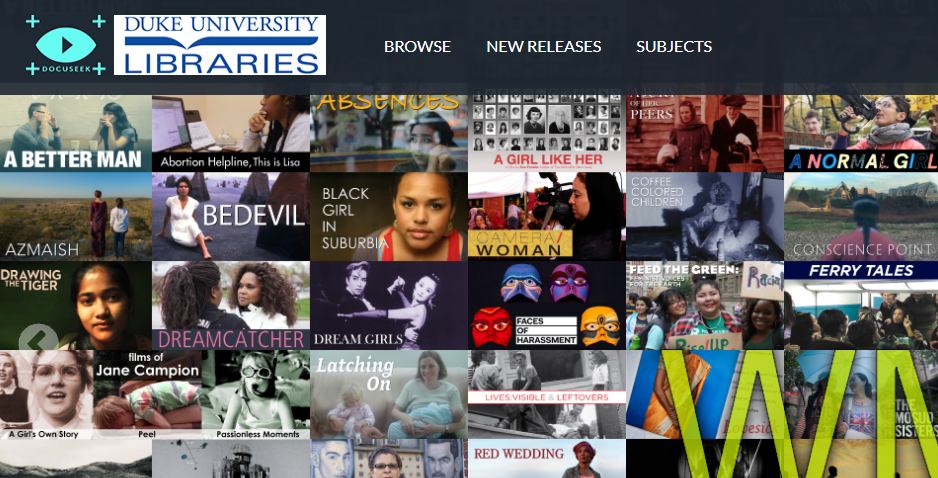 The Docuseek streaming video platform  provides a window into subjects and content from around the world and across disciplines. Here is a selection of titles that examine indigenous peoples of North America. Available through Duke Libraries with netid/password authentication, explore new cultures and topics through the lens of award-winning filmmakers. Ama  Stream Online
A powerful look at the untold story of the involuntary sterilization of Native American women conducted by the Indian Health Service and lasting  well into the 1970s.
(Bullfrog Films, 2019, dir. Lorna Tucker) Awake : a dream from Standing Rock Stream Online or Lilly DVD 31281
Moving from summer 2016, when demonstrations over the Dakota Access Pipeline’s demolishing of sacred Native burial grounds began, the film documents the story of Native-led  fight for clean water and the  environment. The film is a collaboration between indigenous filmmakers: Director Myron Dewey and Executive Producer Doug Good Feather; and environmental Oscar-nominated filmmakers Josh Fox and James Spione. nipawistamasowin: We Will Stand Up Stream Online
The story of the killing of young Cree man Colten Boushie and his family’s pursuit of justice weaves a profound narrative encompassing the filmmaker’s own adoption. (National Film Board of Canada, 2020, dir. Tasha Hubbard) Without a Whisper Stream online
The untold story of the profound influence of Indigenous women on the beginning of the women’s rights movement in the United States. (Women Make Movies, 2020, dir. Katsitsionni Fox)