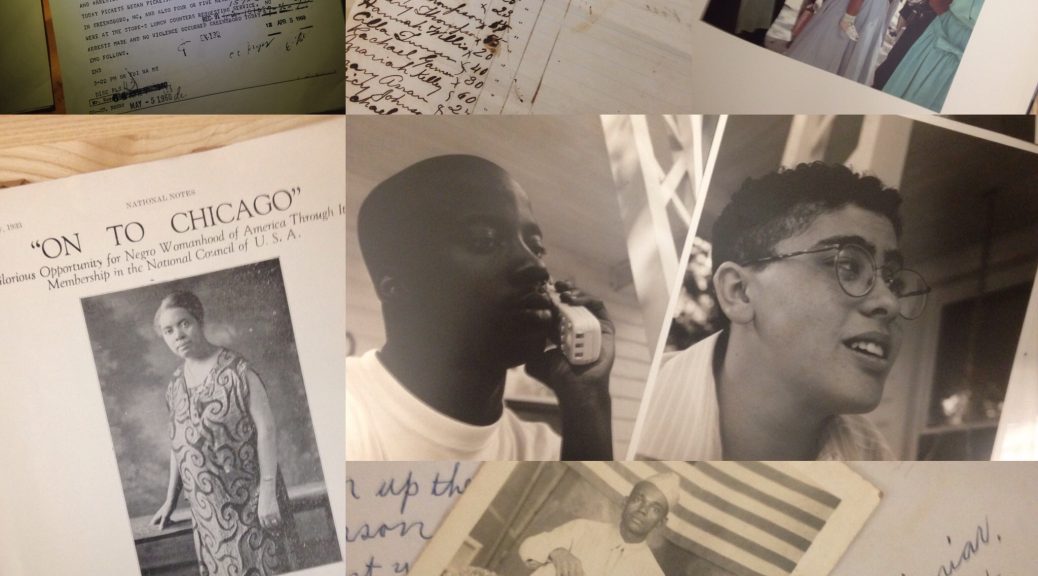 Happy Black History Month! This year we’ll be celebrating #28daysofblack by sharing materials from the Rubenstein Library’s collections and by highlighting our work on current projects. Stay tuned to follow our rare materials catalogers and manuscript archivists as they catalog and process collections that feature black authors, activists, artists, characters, entrepreneurs, and families. You will also be hearing regularly from John Gartrell, Director of the John Hope Franklin Research Center for African and African American History and Culture. John will be posting about the SNCC Legacy project, among many other things. You can follow us on our various social media platforms:

Here’s a brief rundown of the projects we will be working on for #28daysofblack:

In the 1960s a group of brash young organizers worked alongside local people in the Deep South to change the direction of America. The Student Nonviolent Coordinating Committee was a key catalyst for mobilizing grassroots activists to address voting and political power, economic equity, education, and civil rights. Over the last three years, the SNCC Digital Gateway project has worked to create an online platform that highlights the work of SNCC activists, mentors and allies using primary sources from our library and libraries across the country.

This worn and creased contract was once framed and ostensibly hung on someone’s wall. It contains language binding newly-freed African Americans and their children to the Plains Plantation in Jefferson County, Mississippi and was signed not even a month after the Civil War was over. According to the contract, the laborers committed to working every day “from sun to sun,” except Sunday, with other possible days off. They were to be paid one quarter of the net proceeds for the crop. Surnames of the freedmen include: Wilson, Thompson, Digg, Turner, Lonsway, Hatton, Clement, Willis, Payne, West, Blair, Garner, Kelley, Arran, and Johnson. The contract was written in iron gall ink, which caused corrosion of the paper. It now has a catalog record and a collection guide and is currently with Duke Libraries’ Conservation Department to receive repairs and proper housing.

Radio Haiti is an ongoing, multi-year project to create a trilingual (Haitian Creole, French, and English) public-facing digital archive of all the audio of Radio Haiti-Inter, Haiti’s first and most prominent independent radio station. Our goal is to make the content as accessible as possible to people living in Haiti.

In February, we are going to finish up the processing of Radio Haiti’s papers, and archivist Laura Wagner will be traveling to Haiti to continue to do outreach around the project and to distribute flash drives with a large selection of Radio Haiti audio (around 500 recordings) to libraries in Haiti.

The Rubenstein Library recently acquired works by and about the abolitionist and women’s rights activist Sojourner Truth. Some of these acquisitions form part of the Lisa Unger Baskin Collection, including multiple editions of The Narrative of Sojourner Truth. While describing these editions in OCLC, the shared catalog used by libraries around the world, catalogers noticed that Olive Gilbert, a white woman who acted as Truth’s transcriber, is given authorship of The Narrative. Cataloger’s are working to fix this attribution, mainly looking to biographer Nell Irvin Painter, to confirm Truth as the author and Gilbert as the transcriber. Catalogers will use this research to correct records in OCLC and the Library of Congress Name Authority File.

This collection exists due to historian and editor Robert A. Hill’s desire to document the journey of Jamaican black nationalist leader Marcus Garvey (1887-1940) and his Universal Negro Improvement Association (UNIA) and the back to Africa movement. Hill’s interest in the subject encouraged Garveyites to hand over cherished photographs, notebooks, legal documents, and printed ephemera that describes the rise of the organization, the battles with detractors and the FBI, and Garvey’s subsequent trial, jailing, and deportation. The UNIA members’ passion for the dream of black independence is further conveyed by their oral histories and personal papers. After a year and half of hard work by archivists, this large collection is now open to research.

Catalogers in the Rubenstein Library and across Duke University Libraries are currently cataloging the Edwin and Terry Murray Collection, a comic book collection spanning decades and featuring around 50,000 individual items. This month, we’ll focus on cataloging comics starring African American superheroes like Luke Cage, Black Lightning, and Storm, as well as highlight the work of companies like Milestone Media, a company created by African American artists and writers. We will do this work in our local catalog (Search “Edwin and Terry Murray Collection (David M. Rubenstein Rare Book & Manuscript Library)” to follow along!) and in OCLC.

This promotional book, part of the Lisa Unger Baskin Collection, tells the fascinating tale of Poro College, a school that taught black cosmetology, deportment, and business skills to African-American women in the United States. The school was founded by Annie Turnbo Malone, an entrepreneur and philanthropist who developed a very lucrative line of hair products in the first half of the 20th century; many credit her business model to the success of other black entrepreneurs, including Madame C.J. Walker.

While doing a survey of the Rubenstein’s collections in search of highly-flammable nitrate negatives, Visual Materials Archivist Paula Mangiafico noticed an interesting collection with an unprocessed addition that was mostly photographs, the Bullock family papers. Upon closer inspection, it became clearer that these photos depicted a bi-racial branch of the Bullock family and that the collection could use more detailed and updated description. This month we’ll be returning to the Bullock family papers and sharing information about the descendants who lived in Nutbush and Manson, North Carolina.

One of the many collecting interests of The Sallie Bingham Center for Women’s History & Culture is artists’ books by women. The Bingham Center describes artists’ books as an “amalgamate of traditional arts, such as graphic design, printmaking & bookbinding, with the full spectrum of contemporary art practice and theory, expanding and redefining the form.” Recently, the Rubenstein acquired Divide and Conquer by Maureen Cummins, a book that uses period photographs, many of them from the New York Historical Society and Schomburg Center for Research in Black Culture, and a manuscript from the American Antiquarian Society to explore:  the early history of the Ku Klux Klan; ideas about power, oppression, and terrorism; and thoughts and questions about how communities come together and are torn apart (description taken from Maureen Cummins’ website).  Once this book is cataloged, it will be ready for researchers. If artists’ books interest you, make sure to also check out Clarissa Sligh.

The Jonathan Leiss papers contain oral histories about the sit-ins in North Carolina during the 1960s. The library received the papers in 2007 and we created a catalog record. This month we’ll be adding FBI files that were released in 2008, and we’ll be creating a collection guide that will make it easier for researchers to discover and use this collection.

This newly acquired family photo album contains photos and clippings of Henry Washington, who was a repairman for the Tuskegee Airmen (the first African American military aviators in the United States) during WWII. He was also a painter and musician. We will be carefully removing the photos from their current album for conservation reasons and creating a catalog record and collection guide so that it will be available for researchers soon.

2 thoughts on “#28daysofblack at the Rubenstein”