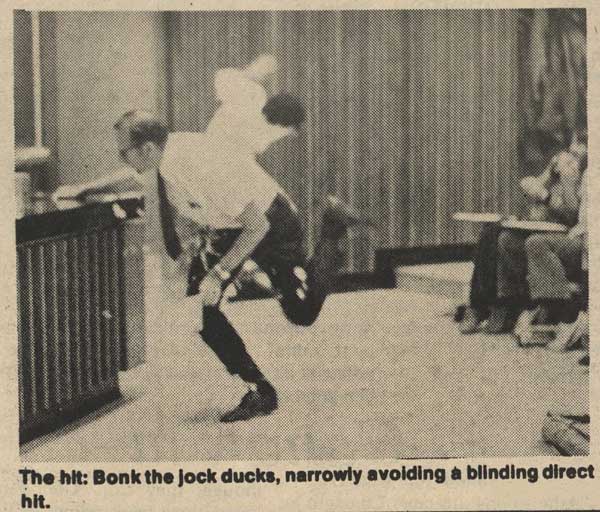 In honor of Pi Day, it’s time for a pop quiz.

If you, an esteemed Duke University professor, received a pie in the face in front of your class, what would you do?

A. Update your CV, in preparation for finding an alternate career far away from college students.
B. Cry.
C. Pause for snack time, then continue your lecture on a sugar high.
D. Chase your assailant and catch him while wading through a creek.

If you were popular chemistry professor James Bonk (who passed away in 2013), your answer would be D.

Duke students have always been enterprising—a proud trait imaginatively demonstrated by the brief but legendary history of Pie-Die, Ltd., a student-run company that placed its first advertisement in the March 21, 1975 issue of the Chronicle.

For a fee, Pie-Die would track down your target of choice and, well, you get the idea. Apparently, business was quite good: on March 28th, an anonymous letter to the editor of the Chronicle, written on behalf of the “Family,” spoke of a “labor shortage” and offered a job to anyone with “expertise in dexterity and cunning not to mention a dash of insanity.” A hit on a professor cost around $30, while $300 bought a contract on then-Duke president Terry Sanford.

We sincerely hope that those who receive our pies are not left with a bad taste in their mouths. All pies are administered in good clean wholesome fun in the best “mom-apple pie” tradition. To prove our intentions, all proceeds will go to World Famine Relief after operating costs have been met.

The first to be hit was psychology professor Irvin Alexander, who was pied in front of his class in Zener Auditorium. He wore a fencing mask to his next class.

James Bonk’s turn came on March 31st, one day shy of April Fools’ Day. His hired assailant caught him with a pie at the end of one of his famed “Bonkistry” lectures. The first-year “hit-man” either didn’t know or failed to properly consider Bonk’s athletic prowess: he was a volunteer coach for Duke’s men’s tennis team and had played the sport since his childhood.

With his 200 students cheering him on, Bonk chased the young man out of his class, across campus, and finally caught up with him in the middle of a stream, where he demanded to see the student’s Duke identification card.

This type of prank was becoming a trend on college campuses, and Bonk’s pursuit became national news. It was the perfect opportunity for pun-loving headline writers: the Charlotte Observer‘s article was titled “Pie-Eyed: Latest Craze is Chunking Custard,” while the Raleigh Times went with the more subtle “Creamed professor nabs pie thrower.” The Chronicle‘s headline was direct: “Bonk gets bonked.” The newspapers reported that the student would possibly face disciplinary action and that Bonk would also hold him responsible for his dry-cleaning costs.

After this, we lose track of Pie-Die: was there a turf war with their competitor, Fli-Pie? Did they ever catch up with Terry Sanford? Let us know in the comments if you can shed any light on these Duke history mysteries. (And, if you were a part of Pie-Die, let us know if you have any documentation from those days that you’d like to add to the University Archives. The statute of limitations must be up by now.)

Oh and, by the way, the pie that hit James Bonk was lemon meringue. Happy Pi Day!

2 thoughts on “How NOT to Pie a Duke Professor”