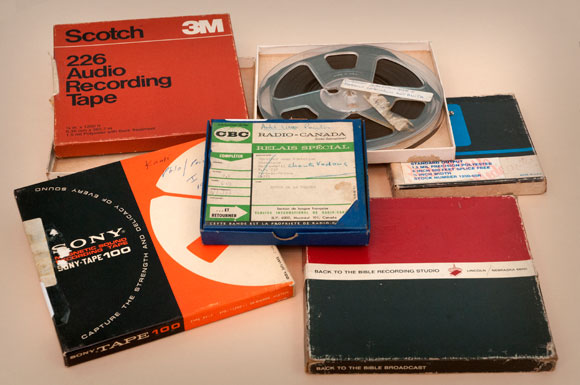 The David M. Rubenstein Rare Book & Manuscript Library at Duke University has received a grant of $200,000 from the National Endowment for the Humanities to support Voices of Change: Preserving and Presenting Radio Haiti.  This two-year project, set to begin in July 2015, will preserve and make widely available the written- and spoken-word archives of Radio Haiti Inter, the country’s oracle of democracy from the late 1960s until its closure in 2003. The announcement of the award coincides with the fifteen year anniversary of the assassination of the station’s owner and Haiti’s most prominent journalist, Jean Dominique, and amidst continuing news coverage about the ongoing trial of his accused murderers.

The Human Rights Archive at the Rubenstein Library received the archives of Radio Haiti in late 2013 as a gift from Michèle Montas, the station’s co-anchor and widow of Dominique.  “To me, Duke University was the most welcoming environment for these unique archives, with knowledgeable teams of scholars and archivists able to preserve the past and help to use that recent past as a tool to re- imagine the future,” commented Montas about her decision to place the archives at Duke.

As evidenced in the more than 3,000 recordings and 70 linear feet of paper records comprising the collection, Radio Haiti distinguished itself from other media outlets in Haiti by covering not only events in Port-au-Prince but news from the rural areas of Haiti, including a grassroots democratic movement that eventually overthrew the Duvalier dictatorship in 1986. It was the first independent radio station in Haiti, and the first to broadcast in the language of the people, Haitian Creole, instead of the French spoken only by Haiti’s elite.

The collection is one of the most important and comprehensive resources available for studying and understanding the recent history of Haiti. Primary materials related to Haiti are relatively rare, and the archives of Radio Haiti are particularly distinct both for the depth and breadth of their coverage. According to Laurent Dubois, project advisor and Marcello Lotti Professor of Romance Studies and History at Duke, “The Radio Haiti Archives represent a tremendous resource for scholars, educators, and the general public interested in culture and politics in Haiti from the late 1970s to the present. Under the leadership of Jean Dominique and Michèle Montas, the station served as a critical voice for reportage, debate, editorials, and news for several decades.” Access to these important primary materials will allow scholars to write the history of the country in nuanced and participatory ways.

Grant funding will support a full-time project archivist fluent in both Haitian Creole and French to oversee the arrangement, description, digitization and preservation of these materials. To support multilingual and international research, audio recordings will be described in French, Haitian Creole, and English, and will be made freely available online via Duke’s Digital Collections, the Digital Public Library of America, and the Digital Library of the Caribbean.

In order to promote easy access to these materials in Haiti, the Library will partner with the Forum for Scholars and Publics at Duke and FOKAL (La Fondation Connaissance et Liberté/Fondasyon Konesans Ak Libète), a community organization in Haiti, to place digital copies of the recordings in libraries throughout Haiti. The team will also explore creating podcasts from the recordings to allow for easier access in regions with intermittent internet connectivity.

The Radio Haiti collection is a singular resource supporting a nuanced and comprehensive understanding of the last 50 years’ of Haiti’s history. By preserving and making accessible these archives, Duke University Libraries seeks to advance the dialogue not only about Haiti’s past but also about its future.

Those interested in learning more about the archives of Radio Haiti are encouraged to visit the pilot site developed collaboratively between the Forum for Scholars and Publics and the Library at http://radiohaitilives.com/.   This site includes access in Creole and English to all the recordings reformatted as part of the planning phase of the grant.