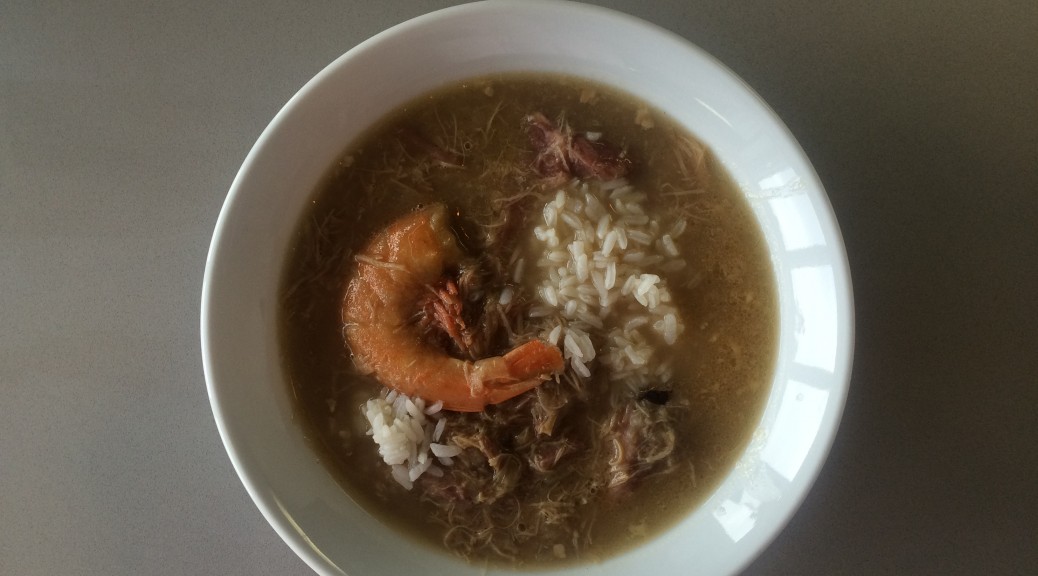 Last week, I saw a student production of A Streetcar Named Desire. The play, famously set in New Orleans, immediately ignited memories of my time in NOLA. One moment, I was sitting under the green and white striped awning of Café Du Monde where I eagerly waited for the arrival of a small mountain beignets. Then, I was savoring every morsel of a roast beef po’boy from Parkway Bakery, blissfully unaware that rivulets of au jus were trailing down my wrists. After that, I drifted off even further and was reliving my first slurpy spoonful of duck gumbo. That dish made my heart sing!

Gumbo is one of the oldest and most iconic dishes served in New Orleans. In its most basic form, gumbo is a soupy stew cooked slowly over a low flame. It is served in a bowl with a heaping spoonful of Louisiana long grain rice. The simplicity of that description is misleading, though. Recipes for gumbo are so diverse that it is nearly impossible to define the dish in formulaic terms. Peering into a simmering pot of gumbo, for example, you might see any combination of the following meats and seafood: crabs, shrimp, oysters, ham, chicken, duck, rabbit, and sausage. You might also spot roughly or finely chopped onions, celery, and bell peppers—the so called “holy trinity” of Louisiana cooking. Often, you’ll catch a glimpse of the swirling, willowy tendrils of okra slime. Or, you might see a bay leaf bobbing along the surface of the stew as it slowly releases its tangy, herbal flavor into the stock. Gumbo, then, is anything but formulaic and reflects the amazing complexity of New Orleans’ Creole food culture. Gumbo is also a dish that invites experimentation. In fact, I might characterize it as a “playful” one. Inspired by the vivacious spirit of this dish, I chose to modify some aspects of the gumbo I found in the The Picayune’s Creole Cook Book (1916). I’ve included both the original recipe and my derivation of it below.

Shell the shrimp, season highly and scald in boiling water. Put the lard into a kettle, and, when hot, add the flour, making a brown roux. When quite brown, without a semblance of burning, add the chopped onion and the parsley. Fry these, and when brown, add the chopped bay leaf; pour in the hot oyster liquor and the hot water, or use the carefully strained liquor in which the shrimp have been boiled. When it comes to a good boil and about five minutes before serving, add the shrimp to the gumbo and take off the stove. Then add to the boiling hot liquid about two tablespoonfuls of the “Filé,” thickening just as desired. Season again with salt and pepper to taste. Serve immediately with boiled rice.

In New Orleans, there is a common phrase that marks the beginning of many gumbo recipes: first you make a roux. A roux is a combination of flour and fat (oil, lard, or butter) that is slowly toasted over a low flame, creating a rich, nutty flavor. For many people who are new to Creole cuisine, making it can be an intimidating process. After all, it takes at least 30 to 45 minutes to prepare a roux from scratch (no wonder people buy it in jars). The time investment is well worth it, though. The longer you toast your roux, the more complex and delicious the flavor of your gumbo!

I started off with a large soup pot (one with a thick bottom). Over medium heat, I combined equal parts oil and flour, stirring constantly (preferably with a wooden spoon). At first, the roux will be fairly thin and light yellow in color. As the flour starts to toast, the roux will thicken slightly and air bubbles will begin to form on its surface. It will also appear slightly “gummy”—almost like mashed potatoes (if your roux is still thin, you can add another tablespoon or two of flour to thicken it). The key is to keep stirring. After about twenty minutes, the roux will begin to smell like popcorn or toasted nuts. At this point, it will gradually begin to darken to a caramel color. Keep stirring! Over the next ten to fifteen minutes, the roux will become even darker. I always say that an ideal roux is almost the color of a Hershey’s chocolate bar (and that transformation can take over an hour). If you do not make it that far in the process, that’s OK. The most important thing is to cook the roux long enough to eliminate the “raw” taste of the flour. Once you’ve reached your ideal coloring, add the chopped onion to the roux. You will hear a sizzling sound. Adding the onion stops the toasting process and will prevent your roux from burning. Allow the onions to cook for 10 minutes over medium heat, stirring occasionally. You want them to sweat and begin to brown. Add the chicken stock, oyster liquor, shrimp, chicken, ham shank, and bay leaf. Bring the gumbo to a boil and then reduce the heat so that you have a steady simmer going for two hours. Stir every 15 to 20 minutes. You want the stock to reduce by a third.

A few notes: I prefer using unpeeled or partially-peeled shrimp because the exoskeleton gives the stock a really wonderful, shrimpy flavor. I also use smoked ham shank over hocks because the former has more meat, which I later pull off the bone and incorporate back into the gumbo before serving. In addition, I like to use the dark meat of chicken because it has a richer flavor that works well with the nuttiness of the roux. Last, but not least, if you cannot find oyster liquor, you can substitute it with unsalted chicken broth.

After the gumbo has reduced, take it off the heat. Add salt and pepper to taste. (The stock will already be fairly salty because of the smoked ham shank, so you may not need additional salt).

I like to serve my gumbo over ½ cup of long grain rice. I allow my guests to add a dusting of filé powder to their own bowls before digging into their supper. I also encourage them to get up close and personal with their gumbo. I often find myself calling out instructions and encouragement: “Pick up that shrimp right from the bowl! Don’t be shy! You’re supposed to eat gumbo with your hands as well as your spoon.” At least, that was how I was taught to eat my gumbo when I lived in New Orleans. Laissez les bons temps rouler! Julian Carr and the Magical Occoneechee Farm
"The Journey" of Reverend Jeanne Audrey Powers' Papers at Duke
In the Lab: Boxing the Blue Devil