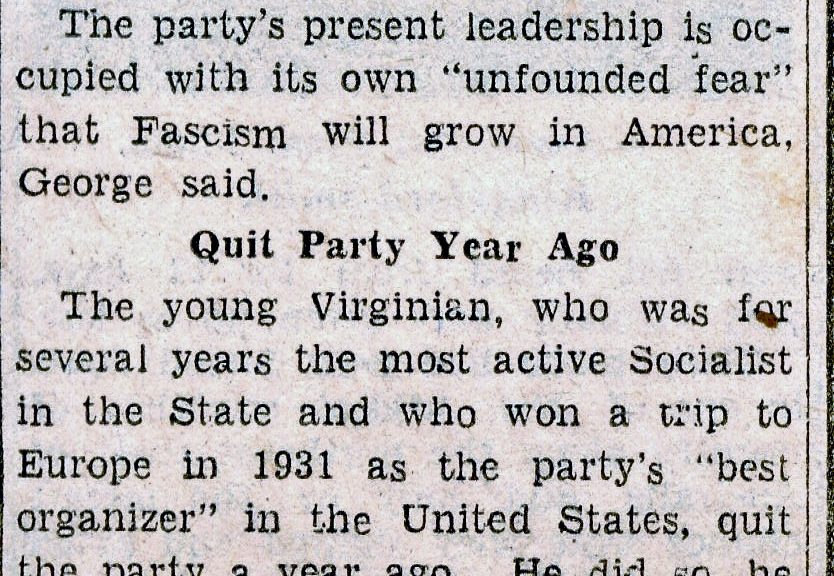 I recently had the honor of conducting dissertation research at the lovely David M. Rubenstein Rare Book & Manuscript Library’s Human Rights Archive, made possible by the Marshall T. Meyer Research Grant and the helpful, hospitable staff.

My research reveals connections between Populism and Progressivism, in both the implementation of the New Deal, and the formation of Louisiana Governor-turned-Senator Huey P. Long’s Share Our Wealth program. Both are part of a single tradition I refer to as Southern Socialism. Comparing letters and clippings in the Huey P. Long Papers with the David Gordon George Papers suggests that, to dissidents, “states’ rights” was about resisting federal intervention, not about limiting government involvement at the state and local levels.

George’s writing captured the Virginian’s evolution from Socialist to “a New Deal Democrat, with a small ‘d’ on the democrat.” Although George went on to become a mainstream Southern conservative – supporting both Barry Goldwater and George Wallace in later decades – in the 1930s he represented one iteration of the South’s Leftist tradition. Clippings George p

reserved demonstrate the values that motivated him to join the Socialist Party, and later leave it. He eschewed party affiliation, rejecting Southern Democrats, who maintained anti-democratic policies such as the poll tax, and Socialists, whom he believed “moved so far to the leftward it is in danger of committing political ‘suicide.’”[i]

In 1937, George wrote a series of articles which illustrate the maintenance of Confederate identity among white Progressives even as they embraced seemingly contradictory values and policies of the political Left. George promoted the Lost Cause cultural identity in several stories for the Sunday Magazine of the Richmond Times-Dispatch, referring to the Confederate flag as contemporary Southerners’ “own flag,’ comparing the last battles of the Confederate Navy to epic Viking funerals, and praising “almost self-sufficient plantations” as the most “outstanding feature” of the Old South.[ii] His affinity for Southern nationalism is remarkable when juxtaposed with other articles in George’s papers advocating Leftist priorities, including government intervention in the establishment of co-operatives, racial justice, state-supported vocational and academic education, and expanding democracy through repealing the poll tax.[iii]

Individuals often simultaneously subscribe to two seemingly contradictory ideologies, yet George’s disparate interests suggest that, for him and other members of the Southern Left, states’ rights were not incompatible with a sort of “small scale” socialism.[iv] “States’ rights” to George was not about slavery or the protection of the socioeconomic status quo, but rather, about a government-supported cooperation to benefit the South’s labor force, which was inextricably tied to local geography through agriculture or extractive industries such as mining and lumber. For dissidents outside the Socialist Party, suspicion of a distant federal government melded with a community-based agrarian tradition, creating a coherent socialist vision tailored to the South.

This way of thinking may explain Huey Long’s peculiar politics. Long’s Populist and Socialist priorities were frequently based on local- and state-level control, not nationalization. For example, Long favored securing and promoting state banks over national banking reform, arguing in a letter to supporters, “One of the first things we must try to do now, before it is too late, is to save the system of community banks for the people so that all resources of finance may not be more closely tied up in a few hands.”[v] Likewise, the Conference of Southern Governors, which David George served as a board member, outlined methods for the states to repeal anti-democratic policies without federal legislation.[vi] Socialist policies in the South were conceived as state, not national, initiatives, making “states’ rights” the right to manage their own economies – just as their Confederacy had done in the war to protect slavery.

[iv] Granting that Southerners resented national business monopolies and the global economic system as much as other Americans, the South was unique in that land monopolies were largely local. A lasting distrust for the federal government among white Southerners, the perpetuation of the plantation system, and a period in which dissent leaned Left combined to encourage local- and state-level reforms, as opposed to nationalization.

Why Do We Trust Doctors?
Nature's Remedy: "All Druggists Sell the Dainty 25 Cents Box"
October 6: Readings and Conversation with Sallie Bingham