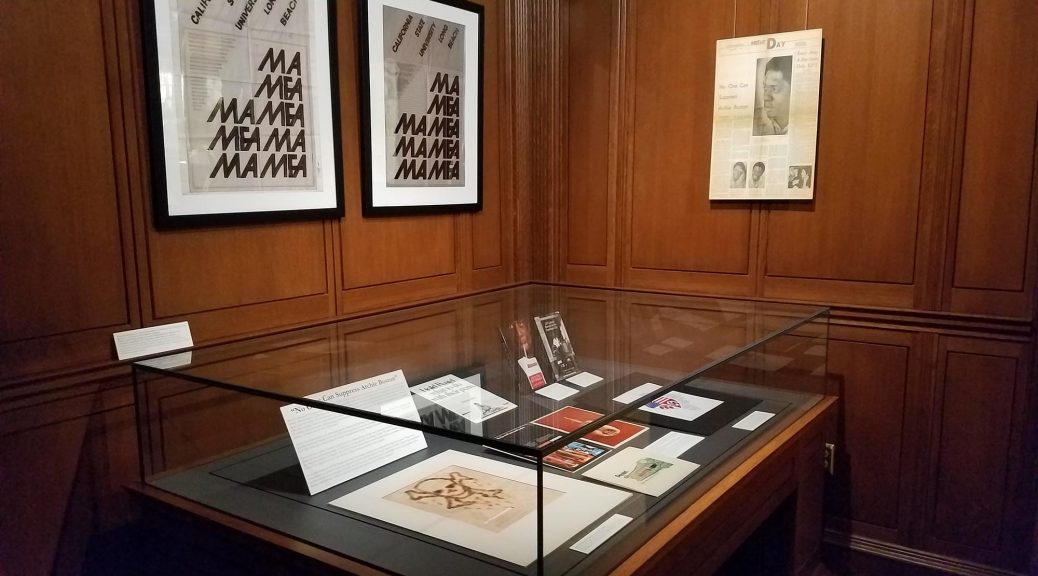 The Hartman Center’s new exhibit, “No One Can Suppress Archie Boston,” on display through October in the Stone Family Gallery, focuses on Archie Boston, a graphic designer whose innovative and socially-conscious designs shed valuable insight into the intersections of race and identity in the advertising world.

Raised in segregated St. Petersburg, Florida in the 1940s, Archie Boston moved to Los Angeles in the 1960s to pursue a career in graphic design. In 1963, Boston and his brother Brad started their own advertising agency, Boston & Boston. As one of the first African-American owned advertising agencies, Boston & Boston faced difficulties securing clients in an almost exclusively white industry. Rather than hide their identity, Boston and his brother confronted the industry with provocative self-promotional ads that made explicit references to slavery and racism. “We wanted our potential clients,” Boston remarked in an interview, “to know that we were a black firm.” Boston later worked at the ad agency Botsford & Ketchum where he developed one of his most famous ads for Pentel that boasted the caption, “I told Pentel what to do with their pens.” By placing himself at the center of the ad, Boston subverted the usually invisible presence of the advertising executive. At a time when very few African-Americans worked in advertising, the ad also announced a subtle shift in the demographics of the industry.

In the late 1970s, Boston left the agency to pursue a career as a professor at California State University-Long Beach (CSULB) where he developed the design program for the next thirty years all while still operating his own graphic design firm, Archie Boston Graphic Design.

The first African-American recipient of the American Institute of Graphic Arts (AIGA) Fellow Award, Boston served multiple terms as president of the Art Directors Club of Los Angeles where he was the first African-American elected to this position. In his final lecture at CSULB, Boston articulated how design, teaching, and social activism shaped his career: “I want to be remembered as a professor who cared about his students and did what he thought was best for them. I want to be remembered as someone who stood up against criticism and spoke out on controversial issues. And finally I want to be remembered as a designer and educator, someone who documented my experience as an African American.”

The Archie Boston Papers offer a comprehensive view of Boston’s wide-ranging career including early student sketches, self-promotional ads for Boston & Boston, corporate ads for Lloyd Bank, Pentel, and Yamaha, awards and university materials related to Boston’s tenure at CSULB as well as Boston’s two published texts, his memoir Fly in the Buttermilk: Memoirs of an African American in Advertising, Design & Design Education (2001) and Lil’ Colored Rascals in the Sunshine City (2009).

Some of Boston’s most important designs, including Boston’s famous Pentel ad, are on display in the exhibit. Other highlights of the exhibit include Boston’s most recent work that engages directly with race and identity, including poetry and designs that Boston created after being inspired by Black Lives Matter, the 2014 events in Ferguson, Missouri, and the 2017 event in Charlottesville, Virginia. These recent works convey a growing sense of urgency and frustration with the treatment of African-American communities in the United States.

The Archie Boston Papers are available for the public research at the Rubenstein Library.

One thought on “New Exhibit: “No One Can Suppress Archie Boston””