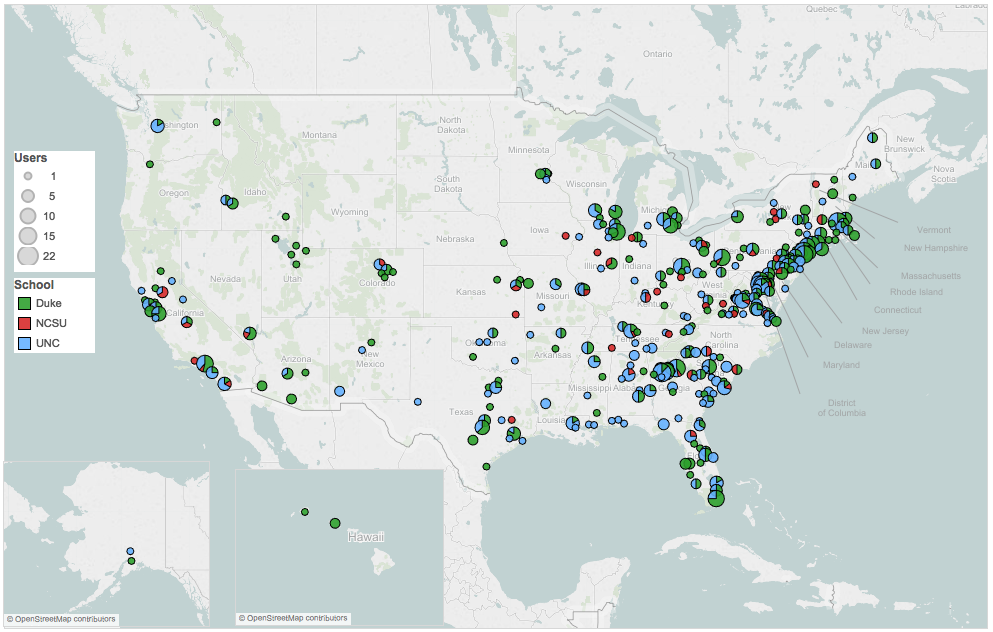 Recently, library staff at Duke’s Rubenstein Library, UNC Chapel Hill’s Wilson Library, and NCSU’s Special Collections Research Center combined the data we’ve collected in order to create some maps showing the home cities, states, and countries of our users from calendar year 2013. Special collections staff gathered this data, but it was Duke’s terrific data visualization coordinator Angela Zoss who used Tableau to create these excellent maps for us. Thanks Angela!

The US map makes clear what we all probably suspected – that most of our researchers come from east of the Mississippi and are clustered in the Northeast. Only Duke shows researchers from Utah, and this doesn’t surprise us. Duke holds two copies of the first edition of the Book of Mormon, and many visitors come to Duke each year to see them (the two copies were used a total of 33 times this past year).

The global map shows that each of us – NCSU, UNC Chapel Hill, and Duke – had researchers from Canada, the UK, and Japan. UNC Chapel Hill welcomed visitors from China and Japan. Many international researchers came to Duke to use collections such as our economists’ papers. But only NCSU had a user from Bosnia-Herzegovinia!

While we’ve only just begun to share our data with each other, this mapping project demonstrates that, taken together, the special collections libraries at NCSU, UNC Chapel Hill, and Duke have truly global reach and impact. Our collections are diverse and exciting, and the world knows it! 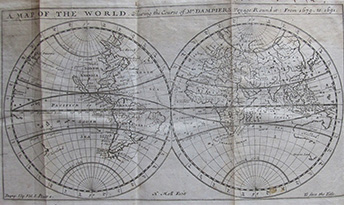 When most people think of maps and books they immediately imagine maps, or atlases. Yet maps illustrate and contribute to a larger argument in books of all kinds, including histories, geographies, travel accounts, and novels.  Beyond atlases, maps are often studied or collected as individual items, or “sovereign” maps, in the words of French scholar Christian Jacob.  This discussion dethrones the sovereign map, asking what changes theoretically and curatorially when we think about maps as “bound images” and a graphic part of the story told by authors and printers in book form.

A range of bound cartographic materials from the Rubenstein Library’s collections will be on display.  For more information, see here on the BorderWork(s) Lab website.

Sponsored by the BorderWork(s) Lab at the Franklin Humanities Institute and Humanities Writ Large. 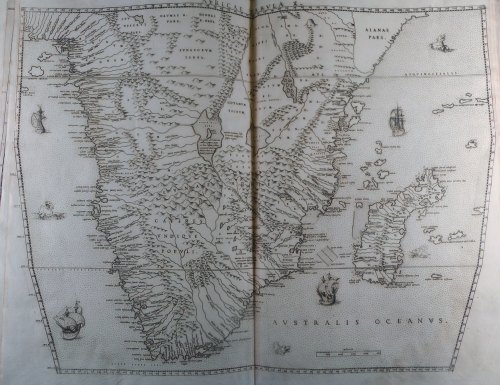 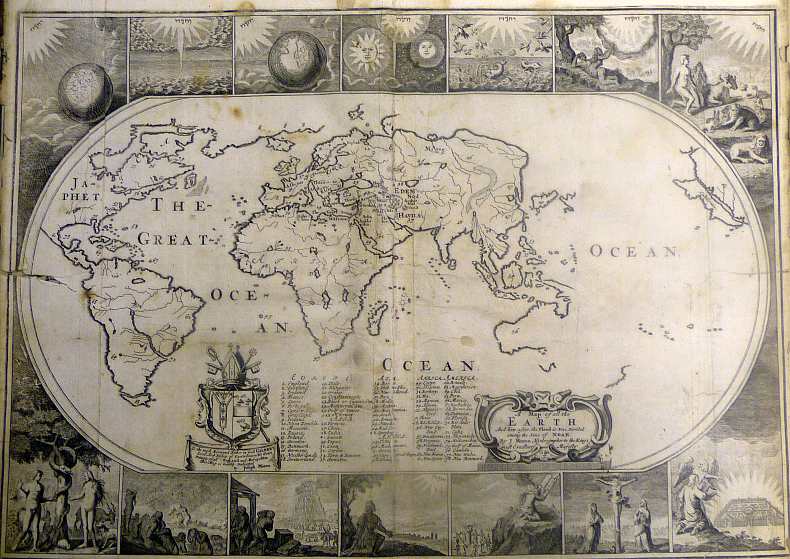 For the past two years, I’ve been working with Technical Services on the Frank Baker Collection of British Methodism and Wesleyana. Baker, a religion professor at Duke, was the preeminent scholar on the foundations of Methodism, specifically its founder, John Wesley. The collection is vast: it contains research for Baker’s many books and articles, original Wesleyan and Methodist documents from the 18th and 19th centuries, teaching materials, correspondence with other prominent religious minds, and a variety of items that simply fit no category.

Perhaps the most interesting part of working with the Frank Baker collection is this treasure trove of miscellany collected by Baker throughout the years. Though primarily a Wesleyan scholar, Frank Baker had a penchant for all religious historical materials, and his collection is frequently peppered with unidentifiable portraits, letters, and notes relating to religion.

One such enigmatic finding was a folded, faded map that, at first, appeared rather unimpressive. Tucked away in a box of other large maps, our subject was folded, torn, and in pretty bad shape. Once unfolded, however, I was instantly drawn to it.

Self-titled, the map reads: “A Map of all the Earth And how after the Flood it was Divided among the Sons of Noah.” Though faded, brittle, and torn, the value of this map is instantly obvious. From the fascinating religious motifs around the sides (some familiar, some indecipherable), to the labeling of each continent with a son’s name, the map certainly sucks you in.

Some of my favorite parts of this map aren’t readily obvious, either. For example, take a good look at the West Coast of the United States. It’s subtle, but California is depicted as an island! It was actually this feature that helped me to date the map. With a little research as to when the name California came into usage, I discovered that our finding probably dates to the 1680s or 1690s. A little more research revealed that California was often depicted as an island in the 16th and 17th centuries: I even found a whole book full of maps with this cartographic error!

As a religion minor, I often found myself returning to the stunning religious motifs decorating the borders of this map. Some are familiar scenes, like Adam and Eve in the Garden of Eden, the Tower of Babel, the Crucifixion, etc. Others are less familiar, such as a shining city as viewed from a hill, or an unidentified man kneeling next to a tree.

I could spend hours trying to figure out the motivations behind the map, or its motifs, or why Japhet, son of Noah, got all of North America, but there’s many more mysteries to find and catalog in the Frank Baker Papers!

Post contributed by Chloe Rockow, a junior majoring in Public Policy Studies with a double minor in Religion and Political Science.