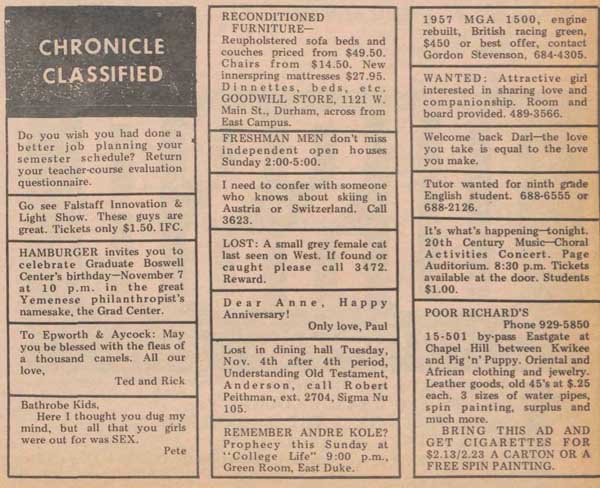 One of the most frequently used items in the Duke University Archives is The Chronicle, particularly the 1960s issues. Many students are interested in the decade—which was one of great change in the student body, the curriculum, and in social life—and alumni and other researchers use it to find out details about particular events. This year, as Duke commemorates 50 years of desegregation among the undergraduate class, The Chronicle is especially helpful as a source of information about desegregation and later student protests like the Vigil and the Allen Building Takeover.

Thanks to the work of the Duke University Libraries’ Conservation Department, Digital Production Center, and Digital Projects Services, we now have eleven complete years (fall 1959-spring 1970) of The Chronicle digitized at http://library.duke.edu/digitalcollections/dukechronicle/. The issues are browsable by year and date and keyword searchable.

Although it will be extremely helpful for research on desegregation and student protest, it will also be helpful for researching topics ranging from the Duke-UNC rivalry to women on campus to ads for local restaurants. Through even small stories and announcements, we learn a lot about campus.

For example, on November 22, 1968, we read that a memorial mass was held to commemorate the 5th anniversary of the passing of John F. Kennedy, Jr.: On March 1, 1963, we learn of the mysterious origins of the name of Towerview Road: There are 868 issues of editorials, news stories, sports writing, advertisements, and much more. Let us know what you think, and how you will use the digitized decade of The Chronicle!