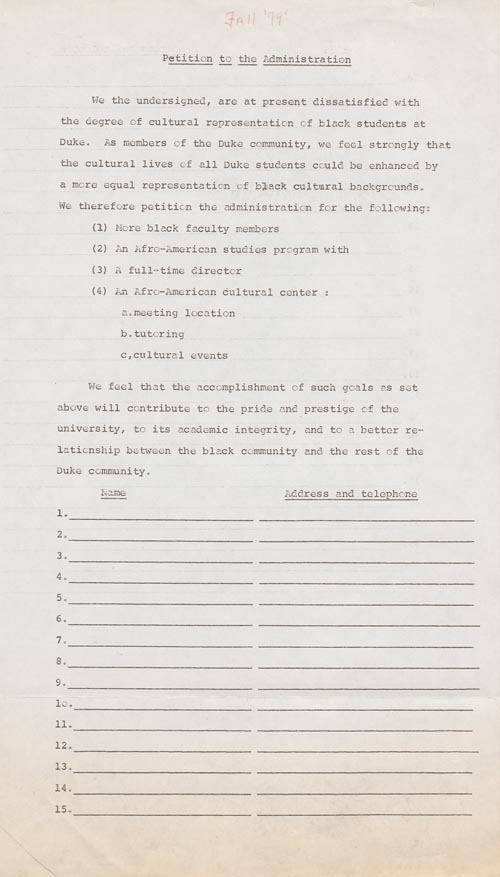 In this month’s update of the CCC Project at Duke University, we are happy to announce the publication online of the records of Duke’s Department of African and African-American Studies.  The items included in this collection document the beginnings of the department, the research and teaching of its faculty members, and the various social and cultural movements occurring within the African-American community during the 1970s and later.  We encourage researchers to peruse the digitized documents, accessible from the collection inventory, to find a host of items sure to add to the scholarship of the long civil rights movement.

Our document spotlight for the month highlights the struggles that the African and African-American Studies Department, then known as the Black Studies Program, experienced in its earliest days.  From its inception in 1969, the Black Studies Program had been offering several courses through adjunct faculty.  Still, the Program lacked a director and its course slate remained minimal, although the Program did offer a major.

Although we do not have a completed petition in the Department’s records, the goals of the document did eventually become Duke’s policy.  University administration would create new standards to recruit more African-American faculty members.  In addition, the Program would soon become a fully-staffed Department.  In terms of cultural engagement, the establishment of the Mary Lou Williams Center for Black Culture in 1983 helped to fulfill the demands listed in the petition.  Researchers will now have the opportunity to learn even more about the beginnings of African-American Studies at Duke and how struggles for recognition led to a strong academic and cultural presence on campus.