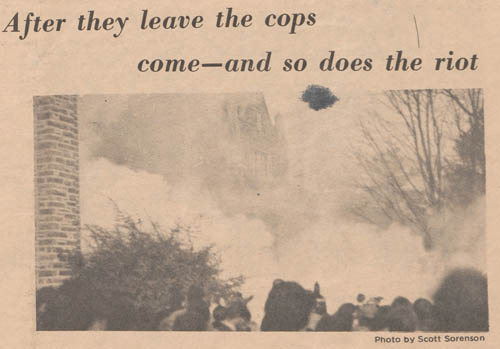 This month’s Digitizing the Long Civil Rights Movement update pauses to look back into Duke’s own past struggles with racial equality.  On February 13, 1969, students in the Afro-American Society occupied the Allen Building where the university’s primary administration offices were (and still are) located.  These students demanded that Duke take steps to enact racial equality on campus, including the founding of an African-American Studies department, the hiring of more African-American professors, and the establishment of an African-American cultural center on campus.  Similar demands had been made before from members of the Black Studies Program, as featured in our fourth update in this blog series.

What distinguished the Allen Building Takeover from the previous efforts for reform was its forcefulness—on both sides of the debate.  The Takeover marked the first such occupation by students in Duke’s history.  The administration’s response also became notable for what some members of the student body perceived to be its brutality.  Police officers dispatched to the scene used tear gas to disperse a crowd that had gathered around the building, leading to a “riot” on the main quad of West Campus. In the wake of the Takeover, students rallied to enact the suggested agenda of the original occupiers.  Eventually, most of the demands did become standard practice at Duke, but the change occurred more gradually than what the galvanized student body had wanted in February 1969.  The items selected above are from a photo essay published by The Chronicle (Duke’s independent student newspaper) that encapsulated the events of Takeover.

We are happy to announce that the Allen Building Takeover Collection and its wealth of primary documents and remembrances of the important event will soon become available online to researchers.