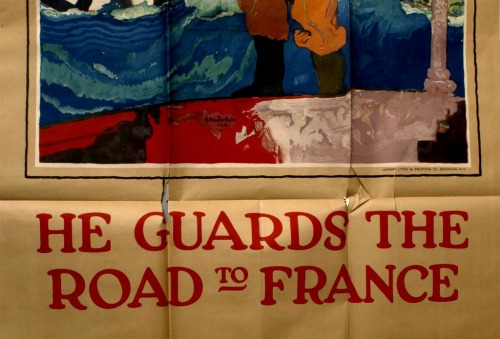 In 1918, the week of November 11-18 was not only a celebration of the end of World War I, but was coincidentally also a week of massive fundraising by the United War Work Campaign to support troops and boost morale until their work was done.  The scrapbook of posters and pamphlets from the campaign was described previously in the post “Scrapbooking for Victory.”

The scrapbook has been undergoing treatment in the conservation lab for the last couple of months.  As a paper conservator, I’ve been collaborating with book conservator Meg Brown to treat the album’s myriad problems, from the damaged binding to the fragile items glued to the pages.  The scrapbook has been a challenge because of its large size and the awkward folding items it contains.  The conservation problems have required hands-on treatment, lots of brainstorming sessions, and ongoing dialogue with curators to understand how the scrapbook will be used.  It’s a popular item with librarians, professors and researchers, and it’s no surprise; it’s a wonderful book!

Meg cleaned, consolidated and relined the spine to make the text block stronger, and she used the spine lining to securely attach the text block to the cover.  I’ve been mending tears and flattening creases in the posters and leaflets, many of which have broken at the folds from handling and from insect attack.  A few of the damaged booklets will be lifted from the pages and housed in pockets for easier, safer access.  The largest poster in the book unfolds to 82 x 41 inches (208 x 104 cm), so I’ve had to commandeer extra table space.  It’s especially useful at times like this to have a table on wheels that adjusts in height! When the treatment is finished, a storage box will be made, and the scrapbook will be sent back upstairs to the Rubenstein Library for all to enjoy.

For more photos of the scrapbook, and its restorative sojourn in the Conservation Lab, visit the “United War Work Campaign Scrapbook” set on the Rubenstein Library’s Flickr photostream.

2 thoughts on “In the Lab: Scrapbooking for Victory, Part Two”