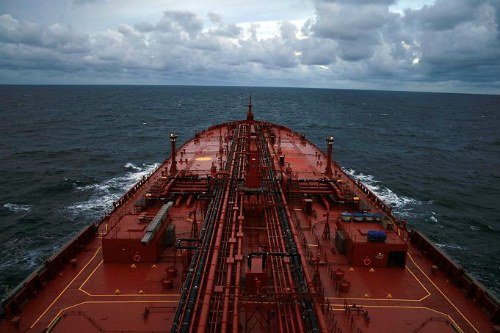 Oil Blue opens to long shots of only sea and sky, vast and awe-inspiring.  Not until after the two-minute mark does any sign of humankind appear, when a gigantic oil tanker slowly moves across the screen.  Finnish film student Elli Rintala sought to make a film about the North Sea oil industry, but not a conventional documentary. “I wanted to explore the area between experimental film and documentary film.” Oil Blue won the 2009 Full Frame President’s Award for the best student film. “On the coastline of my hometown Porvoo is situated the biggest oil harbor and oil refinery of Scandinavia,” she explained to me by email.  “I remember that as a child I was fascinated by the massive ships moving slowly in the horizon. . . . Of course I could have made a more traditional and more informative documentary on this subject, but somehow I wanted to maintain the viewpoint of a child, which shows the vessels as a mystery.”

Filming at sea was not easy. “Because the conditions were quite demanding we had to plan everything in advance as precisely as possible. Every image and every angle had to be known beforehand, we couldn’t improvise that much. But I think that all that planning was a great advantage for the film.”

Rintala was granted access to film aboard the oil tankers without much difficulty, however. “Neste Oil, the company which owns the refinery and the tankers, was very cooperative from the very beginning. . . . [They] realized that my aim was not to make a provocative or accusing film.”

But the strict security regulations were a challenge. “Any electrically powered cameras or equipment were prohibited on the deck because of the danger of an explosion. So we had to use a very old spring-wound Bolex camera when shooting on the deck. . . .

“Part of the material is shot from a tiny inflatable in order to get as close to the water level as possible.”  Filming on a raft presented its own challenges.  “Occasionally the swell of the sea was quite strong and naturally that made the filming more difficult. Once our camera-assistant even threw up during the filming.”

The absence of words in the film compel the viewer to listen—to the sounds of the ocean and machines and to the evocative musical score.  “In general I like the way the music and the sound design coalesce in the Oil Blue. The structure of the film is quite musical in any case. One person said to me, that it is possible to watch it the same way you listen to ambient music. This was a great compliment for me, because my aim was that the images could be like music.”

Although Rintala wants to leave any message in Oil Blue open to interpretation, she says it “could be seen as an allegory of our life style also in a more general way. The oil transportations are only one example of this balance of terror between human race, technology and nature, which is so typical for our time.”

Rintala is currently at work on her graduation film “about the main airport of Finland, Helsinki-Vantaa and the development of air traffic from 1950s to this day. I’m going to use archive material and current footage to portray the lost innocence of flying in our time. So from the element of water in Oil Blue I’m moving on to the element of air.”

One thought on “Oil Blue (Väylä)”