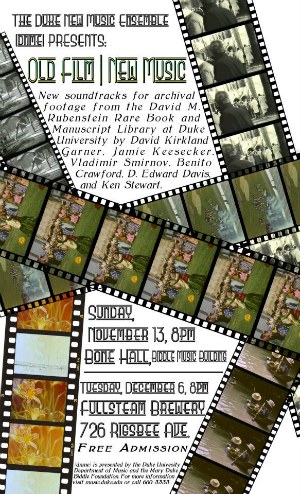 Tonight and on December 6th, the Duke New Music Ensemble will be performing new compositions written as soundtracks for films from the Rubenstein Library’s collections. We asked the dnme composers to tell us a little bit about the films they chose and how they inspired their compositions. For more details about the performances, visit the group’s Facebook page or click the poster at right to enlarge it.

The video I chose to use is from H. Lee Water’s “Spindale ’37” film (from the H. Lee Waters Film Collection). I chose the portions of the video having to do with the factory for Yelton’s Flour, opening with footage of the flour refining process from inside the building then turning to the procession of workers leaving the factory at the end of the day. The music I wrote is not meant to be closely synced with the video. Rather, it creates a singular mood for the film images. The music is created in two parts: a repeating groove in the keyboard, bass and 3 banjos and a slowly unfolding melody in the other instruments. At the beginning and end of the piece the ensemble uses percussion instruments to imitate the sounds of summer in rural North Carolina.

Margolin’s 1965 Hawaii film footage (from the Morris and Dorothy Margolin Film Collection) presents a challenge in that almost every moment captured in the footage comes from a performance that was originally accompanied by music, and the musicians themselves can be seen throughout most of the film. Seeing the musicians strumming guitars and ukeleles in unison is one of the aspects that attracted me to this film. But rather than attempting to recreate the music that would have originally accompanied the images in the video, I have written music that is merely meant to represent my own reactions to seeing the film. At the same time, I have chosen to write for a consort of mostly plucked string instruments similar to those depicted in the video. Musical gestures are at times intended to be synchronized with the musicians on film, and other times not, just as the musical material itself contains hints of Hawaiian tropes while remaining, on the whole, quite different from what would actually have been played by the musicians on film.

My archival footage is of a student protest that occurred at Duke University in 1969 (from the Radio TV Services Records). Despite the “homemade” image quality (or perhaps because of it), the images capture the drama of the protesters in action, with the cameraman acting as a participant and not a spectator. I’m drawn to this film because of its connection with the University’s history, and I tried to mirror the intensity but also the sinister beauty of these images with my music. As students are presently (Nov 2011) involved in “Occupying Duke” in the same physical location as the 1969 protests, I love how the film has both a distant timeless quality and a captivating immediacy. Thanks to the staff of the Archives for preserving this footage and also for making it accessible to researchers and artists.

The video I chose was footage of traveling down a river (the Chao Phraya, I presume?) in Bangkok from a collection of travel footage by former Duke Professor Margolin (from the Morris and Dorothy Margolin Film Collection). I myself have never traveled to Thailand, and the video drew me in with its images of a very exotic world and with its slow hypnotic pace. I tried to create a musical atmosphere that the video suggested to me with very gentle and exotic sounds—muted piano, bowed vibes, slow swells on the guitar and bass, flute that is sung into at the same time as it’s played, banjo, and very sparse strings. I didn’t really think too much that I was working with archive film when writing, I just focused on the images and atmosphere.

The footage I selected is of the Sarah P. Duke Gardens from 1937 (from the Radio TV Services Records). What moves me about this footage is how striking the color of the flowers appears as captured by the Kodachrome film. It is interesting how this footage from 1937 is just two years after Kodak made this kind of film commercially available—in fact, the famous color scenes in the Wizard of Oz were shot with this same film. This captured color, to me, almost has its own texture independent of the hue itself.

The written music for the instruments is based on the live ensemble playing the role of three choirs simultaneously ‘singing’ different music, but at the same time each contributing to a larger, composite texture. In addition to this, there is an electronic track with supporting harmony and the sounds of a typical journey in the rain from my home to the Biddle Music Building recorded onto microcassette.

The process used to construct the visual narrative is based on whether the camera shot is close to the flowers themselves or farther, panning across the gardens. At the same time a ‘chord progression’ of color directs the footage from yellow to orange to red to pink to white to ivory and back to yellow again to repeat the cycle. None of these textures are more important than another and in this way, the whole is truly greater than the sum of its parts.

My mother, a former professional horticulturalist, instilled in me a love of plants and flowers at a young age. Some of my fondest childhood memories are of my mother and I outside planting flowers and vegetables in our family garden. This piece is dedicated to her.

Post contributed by the members of the Duke New Music Ensemble.