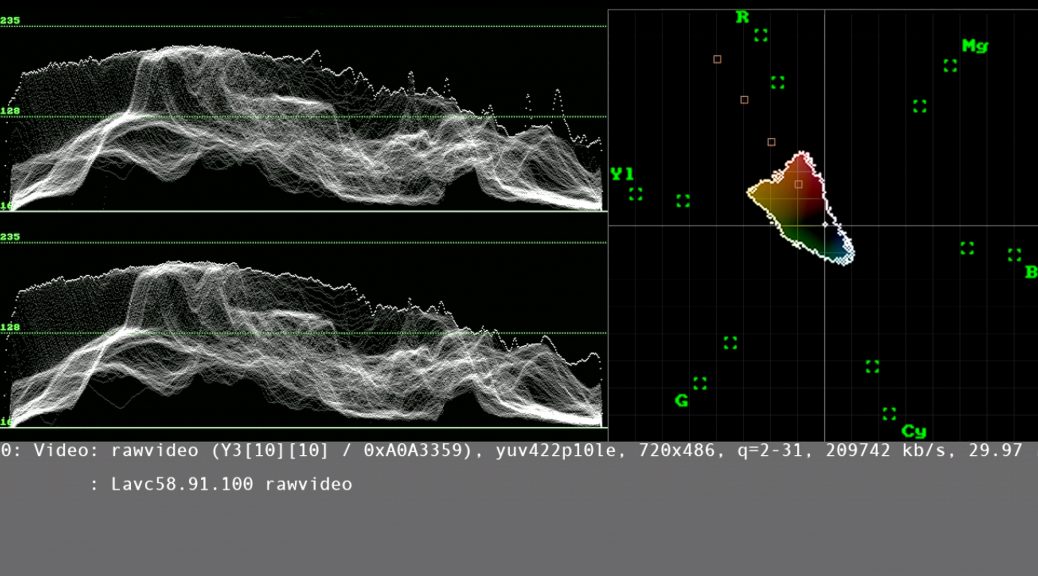 One of the greatest challenges to digitizing analog moving-image sources such as videotape and film reels isn’t the actual digitization. It’s the enormous file sizes that result, and the high costs associated with storing and maintaining those files for long-term preservation. For many years, Duke Libraries has generated 10-bit uncompressed preservation master files when digitizing our vast inventory of analog videotapes.

Unfortunately, one hour of uncompressed video can produce a 100 gigabyte file. That’s at least 50 times larger than an audio preservation file of the same duration, and about 1000 times larger than most still image preservation files. That’s a lot of data, and as we digitize more and more moving-image material over time, the long-term storage costs for these files can grow exponentially.

To help offset this challenge, Duke Libraries has recently implemented the FFV1 video codec as its primary format for moving image preservation. FFV1 was first created as part of the open-source FFmpeg software project, and has been developed, updated and improved by various contributors in the Association of Moving Image Archivists (AMIA) community.

FFV1 enables lossless compression of moving-image content. Just like uncompressed video, FFV1 delivers the highest possible image resolution, color quality and sharpness, while avoiding the motion compensation and compression artifacts that can occur with “lossy” compression. Yet, FFV1 produces a file that is, on average, 1/3 the size of its uncompressed counterpart.

The algorithms used in lossless compression are complex, but if you’ve ever prepared for a fall backpacking trip, and tightly rolled your fluffy goose-down sleeping bag into one of those nifty little stuff-sacks, essentially squeezing all the air out of it, you just employed (a simplified version of) lossless compression. After you set up your tent, and unpack your sleeping bag, it decompresses, and the sleeping bag is now physically identical to the way it was before you packed.

Yet, during the trek to the campsite, it took up a lot less room in your backpack, just like FFV1 files take up a lot less room in our digital repository. Like that sleeping bag, FFV1 lossless compression ensures that the compressed video file is mathematically identical to it’s pre-compressed state. No data is “lost” or irreversibly altered in the process.

The SDI signals are sent to a Blackmagic Design Smart Videohub, which is the central routing center for the entire system. Audio mixers and video transcoders allow the Digitization Specialist to tweak the analog signals so the waveform, vectorscope and decibel levels meet broadcast standards and the digitized video is faithful to its analog source. The output is then routed to one of two Retina 5K iMacs via Blackmagic UltraStudio devices, which convert the SDI signal to Thunderbolt 3.

FFV1 operates via terminal command line prompts, so some understanding of programming language is helpful to enter the correct prompts, and be able to decipher the terminal logs.

The FFV1 files are “wrapped” in the open source Matroska (.mkv) media container. Our FFV1 scripts employ several degrees of quality-control checks, input logs and checksums, which ensure file integrity. The files can then be viewed using VLC media player, for Mac and Windows. Finally, we make an H.264 (.mp4) access derivative from the FFV1 preservation master, which can be sent to patrons, or published via Duke’s Digital Collections Repository.

An added bonus is that, not only can Duke Libraries digitize analog videotapes and film reels in FFV1, we can also utilize the codec (via scripting) to target a large batch of uncompressed video files (that were digitized from analog sources years ago) and make much smaller FFV1 copies, that are mathematically lossless. The script runs checksums on both the original uncompressed video file, and its new FFV1 counterpart, and verifies the content inside each container is identical.

Now, a digital collection of uncompressed masters that took up 9 terabytes can be deleted, and the newly-generated batch of FFV1 files, which only takes up 3 terabytes, are the new preservation masters for that collection. But no data has been lost, and the content is identical. Just like that goose-down sleeping bag, this helps the Duke University budget managers sleep better at night.