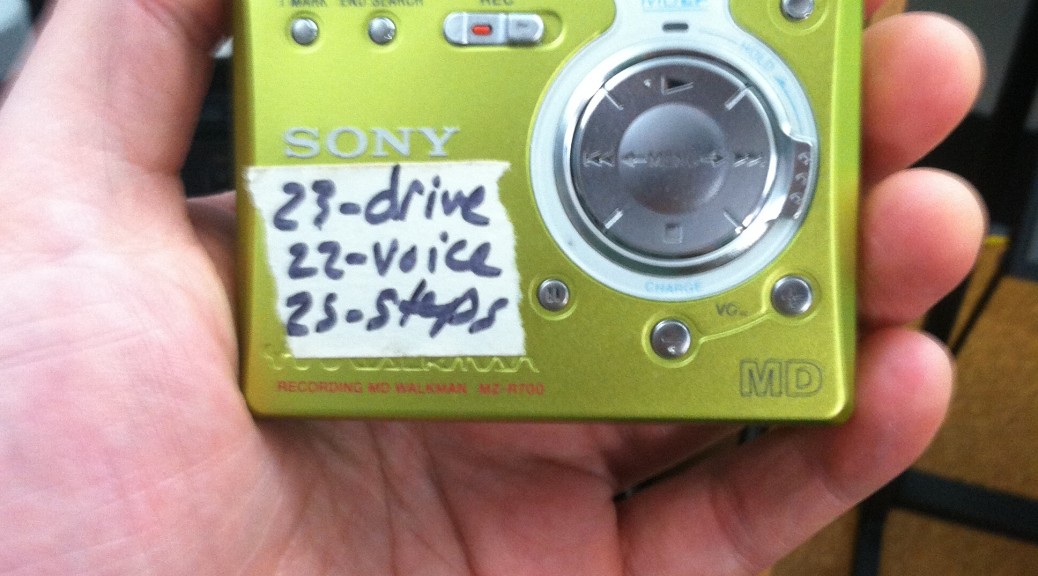 My last several posts have focused on endangered audio formats: open reel tape, compact cassette, and DAT. Each of these media types boasted some advantages over their predecessors, as well as disadvantages that ultimately led to them falling out of favor with most consumers. Whether entirely relegated to our growing tech graveyard or moving into niche and specialty markets, each of the above formats has seen its brightest days and now slowly fades into extinction.

This week, we turn to the MiniDisc, a strange species that arose from Sony Electronics in 1992 and was already well on its way to being no more than a forgotten layer in the technological record by the time its production was discontinued in 2013. The MiniDisc was a magneto-optical disc-based system that offered 74 minutes of high-quality digital audio per disc (up to 320 minutes in long-play mode). It utilized a psychoacoustic lossy compression scheme (known as ATRAC) that allowed for significant data compression with little perceptible effect on audio fidelity. This meant you could record near perfect digital copies of CDs, tapes, or records—a revolutionary feat before the rise of writable CDs and hard disc recording. The minidisc platform was also popular in broadcasting and field recording. It was extremely light and portable, had excellent battery life, and possessed a number of sophisticated file editing and naming functions.

Despite these advantages, the format never grabbed a strong foothold in the market for several reasons. The players were expensive, retailing at $750 on launch in December 1992. Even the smaller portable Minidisc “Walkman” never dropped into the low consumer price range.  As a result, relatively few music albums were commercially released on the format. Once affordable CD-Rs and then mp3 players came onto the scene, the Minidisc was all but obsolete without ever truly breaking through to the mainstream. I recently unearthed a box containing my first and only Minidisc player, probably purchased used on eBay sometime in the early 2000’s. It filled several needs for me: a field recorder (for capturing ambient sound to be used in audio art and music), a playback device for environmental sounds and backing tracks in performance situations, and a “Walkman” that was smaller, held more music, and skipped less than my clunky portable CD player.

While it was long ago superceded by other electronic tools in my kit, the gaudy metallic yellow still evokes nostalgia. I remember the house I lived in at the time, walks to town with headphones on, excursions into the woods to record birds and creeks and escape the omnipresent hum of traffic and the electrical grid. The handwritten labels on the discs provide clues to personal interests and obsessions of the time: “Circuit Bends,” “Recess – Musique Concrete Master,” “Field Recordings 2/28/04,” “PIL – Second Edition, Keith Hudson – Pick A Dub, Sonic Youth – Sister, Velvet Underground – White Light White Heat.” The sounds and voices of family, friends, and creative collaborators populate these discs as they inhabit the recesses of my memory. While some may look at old technology as supplanted and obsolete, I refrain from this kind of Darwinism. The current renaissance of the supposedly extinct vinyl LP has demonstrated that markets and tastes change, and that ancient audio formats can be resurrected and have vital second lives. Opto-magnetic ghosts still walk the earth, and I hear them calling. I’m keeping my Minidisc player.