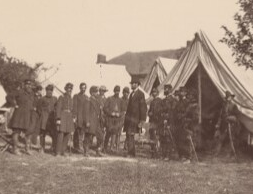 Duke Digital Collections is excited to announce our newest digital offering: The Barnard and Gardner Civil War Photographic Albums.  Rubenstein Library Archive of Documentary Arts Curator, Lisa McCarty contributed the post below to share some further information about these significant and influential volumes.

“In presenting the PHOTOGRAPHIC SKETCH BOOK OF THE WAR to the attention of the public, it is designed that it shall speak for itself. The omission, therefore, of any remarks by way of preface might well be justified; and yet, perhaps a few introductory words may not be amiss.

As mementoes of the fearful struggle through which the country has just passed, it is confidently hoped that the following pages will possess an enduring interest. Localities that would scarcely have been known, and probably never remembered, save in their immediate vicinity, have become celebrated, and will ever be held sacred as memorable fields, where thousands of brave men yielded up their lives a willing sacrifice for the cause they had espoused.”

Verbal representations of such places, or scenes, may or may not have the merit of accuracy; but photographic presentments of them will be accepted by posterity with an undoubting faith. During the four years of the war, almost every point of importance has been photographed, and the collection from which these views have been selected amounts to nearly three thousand.”

The opening remarks that precede Alexander Gardner’s seminal work, Gardner’s Photographic Sketchbook of the War, operate two-fold. Firstly, these words communicate the subject matter of the book. Secondly, they communicate the artists’ intentions and his beliefs about the enduring power of photography. Undeniably, Gardner’s images have endured along with the images of his contemporary George N. Barnard. Working at the same time, using the same wet collodian process, and on occasion as part of the same studio, Barnard created a work entitled Photographic Views of the Sherman Campaign. Both were published in 1866 and as a pair are considered among the most important pictorial records of the Civil War.

To compare these two epic tomes in their entirety is a rare opportunity, and is now possible to do both in person in the Rubenstein Rare Book and Manuscript Reading Room as well as online in new a digital collection. Whether you prefer to browse paper or virtual pages, there is much that can still be discovered in these 148 year-old books.

Something I noted while revisiting these images is that despite their many commonalities, Gardner’s and Barnard’s approaches as photographers couldn’t have been more different. While both works document the brutality and destruction of the war, Gardner’s images convey this through explicit text and images while Barnard chooses to rely heavily on metaphor and symbolism.

Evidence of these opposing visions can be seen at their most severe when comparing how the two photographers chose to depict casualties of war. I find that these images are still shocking, but for completely different reasons.

My perception of the image by Gardner is complicated by my knowledge of the circumstances surrounding its production. Gardner’s Photographic Sketchbook is oftennoted as being the first book to show images of slain soldiers. It is also been widely established that in Sharpshooter and other images Gardner and his assistants moved the position of the corpse for greater aesthetic and emotional affect. In this one image, Gardner opened up a variety of debates that have divided documentarians ever since: How should the most inhumane violence be depicted, for what reasons should the documentarian intervene in the scene, and under what circumstances should the public encounter such images?

The image by Barnard answers these questions in a wholly different manner. When examining this image close-up my reaction was immediate and visceral. A thicket marked by an animal skull and a halo of matted grass— the stark absence in this image is haunting. I find the scene of the death and its possible relics to be as distressing as Gardner’s Sharpshooter. For in this case the lack of information provided by Barnard triggers my mind to produce a story that lingers and develops slowly as I search the image for answers to the General’s fate.

Search these images for yourself in all their stark detail in our new digital collection:

Post Contributed by Lisa McCarty, Curator of the Archive of Documentary Arts