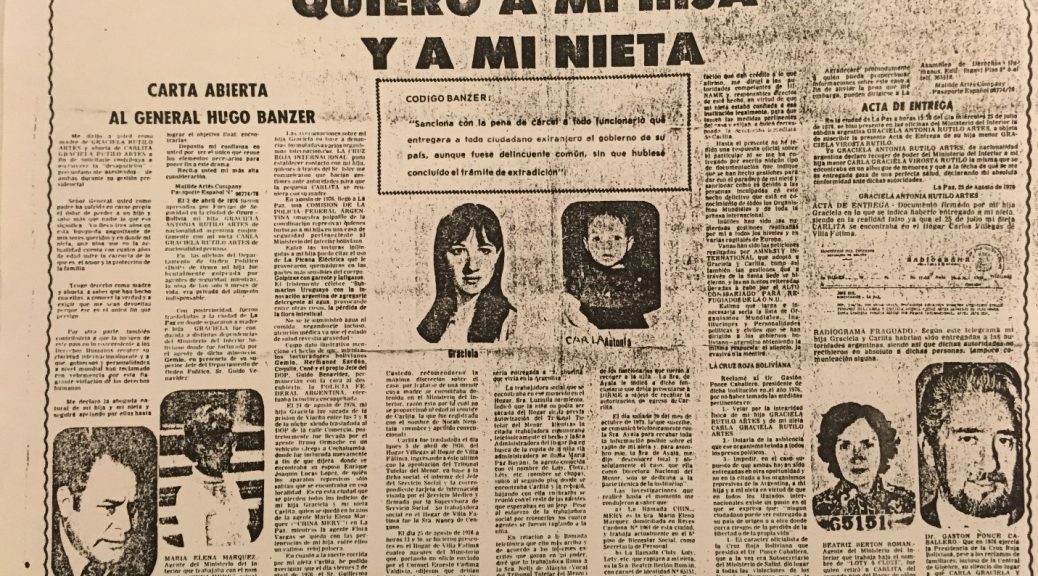 This semester I have had the pleasure of processing the Robert J. Cox papers, the collection guide for which is now available.

Although he wouldn’t know it at the time, 1979 would become the most eventful year of Robert Cox’s life. A British journalist who spent most of his adulthood up to this point in Argentina, Cox found out that his son Peter had received a highly detailed anonymous death threat. The threat came as a result of Cox’s work covering the Dirty War as the editor of the English-language newspaper the Buenos Aires Herald. Cox and his family decided to flee from Argentina. His wife Maud Cox and their five children all came to England and then the United States with him at Harvard where Cox held a Nieman Fellowship. They later came to Charleston, South Carolina where Cox became the assistant editor for the Post & Courier.

A strong theme throughout Cox’s papers is the disappearances of political activists and dissidents, especially those of Jewish descent, throughout the country. Cox himself wrote about the desaparecidos (disappeared) and advocated for the Buenos Aires Herald to cover the violence enacted against them. Articles within the collection that cover the kidnappings range from brief passages to notices created by family members of the “disappeared.” However, one format that stands out above others in the collection never made their way into being published in an official formats – pamphlets created by the family members of the disappeared.

These pamphlets, almost zine-like, were created by Xeroxing official documents, photographs, newspaper clippings, and passages written by the creators alongside one another to create a narrative about what was known about the disappearance of this individual or group of individuals.

We know that at least one of these pamphlets was mailed to Robert Cox himself, as evidenced by Robert Cox’s mailing address on the back of the pamphlet. Working with the ERP (the People’s Revolutionary Army), Jorge Marcelo Dyszel Lewin and his wife Mirtha Nelida Schwalb de Dyszel were disappeared May 18, 1978. They were 22 and 21 years old respectively. Jorge was from a Polish Jewish immigrant family. This pamphlet was likely created by Jorge’s mother, Beatriz Lewin, who was very active in Las Madres de la Plaza de Mayo (the Mothers of the Plaza de Mayo).

The Grandmothers and the Mothers of the Plaza de Mayo continue to work to hold  accountable those who disappeared their grandchildren and children.

Cox did not return to Argentina for over a decade. However, from afar, Cox wrote about Argentina with continued urgency and commitment. His personal papers reflect this engagement, consisting of his own personal writings and those collected by him written by colleagues or other interested parties about Argentina. When democracy was restored to Argentina with the election of Raúl Alfonsín, Cox reported on this and outlined the challenges that lay ahead of the new president as he grappled with the aftermath of the Dirty War. His reporting continues shape how Argentines and the outside world view Argentina and its recent history.

If you are interested in learning more, a documentary film about Cox’s life and work called A Messenger on a White Horse is available from the Lilly Library.  A shortened version of the film is also available on Amazon Prime.