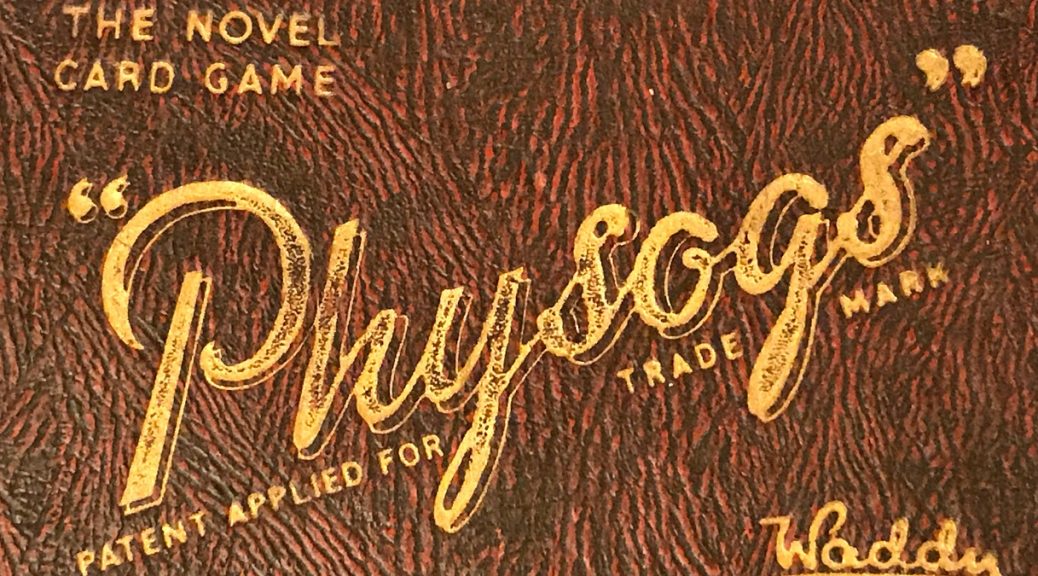 Rubenstein Library researchers take their work seriously, and we do, too. But sometimes their research includes playing games, and when that’s the case we’re more than happy to oblige!

We recently played “Physogs: The Novel Card Game,” a board game from the 1940s about physiognomy, the practice of determining an individual’s character based on their facial features. The game is based on sociologist Jacques Penry’s Character from the Face, which guides readers through using distinctive facial features as a means of identifying personality traits. Represented here as a fun game, the popularization of physiognomic practice added fuel to an already steady 20th century fire of stereotyping based on physical appearance.

To play the game, players each hold four cards and take turns drawing cards from a central pile then discarding cards into another pile in an effort to try to make their face, nose, and mouth cards match with a descriptive text card. The first player who thinks their face is accurate shouts “physogs!” just like in Bingo.

After someone says “physogs,” each player compares the cards they hold to the key book, which determines points awarded. We played a few rounds and quickly learned that we’re very good at earning negative points. With subjective descriptions of nose types like “Well proportioned. Very finely textured skin,” and “Long, narrow ridge. Crude or bony appearance,” and “Broad, crude and bulbous,” it’s challenging to try to match the words to the pictures. And that’s just one facial feature!

It was also immediately apparent that all facial features represented the same skin tone: white. Additionally, many descriptors are written in a heavily gendered and sexist tone, all of which we found unsurprising for a game from the 1940s. For example, a “pleasant and cheerful” woman should be paired with “full, smiling lips, showing the teeth. Dimple at corner of mouth.” Meanwhile an “excitable and impetuous” man should be paired with lips that are “very wide and large. Lips are full yet flat in appearance, with a downward curve in centre.” These personalities are not absolutely equivalent, but give a good sense of the gendered descriptions of relatively similar characteristics.

Our Physogs game experience made for an interesting Friday afternoon with the added benefit of helping a scholar conduct her research and understand the game in practice. Physiognomy’s historical use for judging people based on their looks prompted lively conversations about the 1940s-era facial descriptions and their incorporation in a game. Though physiognomy may sound like fun and games, this “science” was often appropriated for stereotyping by race or gender. Some used this practice to make conclusions about mental intelligence and criminal behavior based on one’s physical appearance, and it’s important to bear those historical uses in mind when interacting with these materials.

If you’d like to learn more about “Physogs: The Novel Card Game” or Jacques Penry’s Character from the Face, we encourage visitors to visit the Rubenstein Library online or in person. For more of the Library’s holdings about physiognomy, click here.

One thought on ““Physogs:” Hard to Say and to Play”