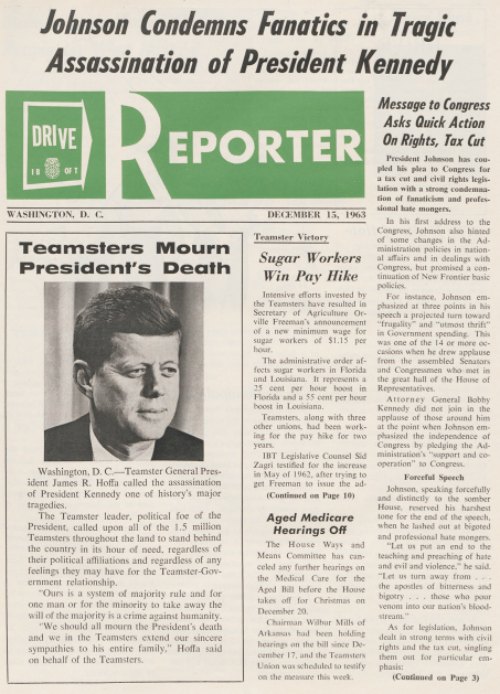 In this month’s update of the Content, Context, and Capacity Project at Duke, we examine the context of an issue of the DRIVE Reporter, a publication of the International Brotherhood of Teamsters.  The first page of this issue includes a memorial to President John F. Kennedy and an article about President Lyndon Johnson’s new call for Congress to act on civil rights legislation.  Immediately, two questions come to mind:  Why are these issues appearing in a labor union’s publication?  And why does this publication appear in the papers of Basil Lee Whitener, a Congressman from North Carolina?

The first question ties to the stated mission of the International Brotherhood of Teamsters.  Led by its controversial president Jimmy Hoffa, the Teamsters launched DRIVE (Democratic, Republican, Independent Voter Education) in 1959 to educate its members about labor issues and pending legislation.  Both the death of President Kennedy and Johnson’s proposals qualified as issues that would affect labor in the immediate future.  In addition, the Teamsters had fought for the equality of African-Americans in the workplace.  Thus, the inclusion of a story on civil rights legislation made sense in terms of the scope of the Teamsters’ mission.

Committee assignments explain why this publication appears in the papers of Basil Lee Whitener.  As a member of the House Judiciary Committee, Whitener reviewed the federal trial of Jimmy Hoffa that occurred in 1964.  This publication, along with other Teamsters information, was gathered by Whitener and his staff as research files for the trial proceedings.  If Whitener had not been a member of that committee in 1964, the CCC Project would not have access to these rich Hoffa files.

To learn more about the CCC Project and how context plays a role in the history of the LCRM, please visit CCC on Facebook.

ABC's of John Hope Franklin - (A) Aurelia
'Tis the Season: Gifts to the Rubenstein Library, Day Two
Movember Adventures in the Archive