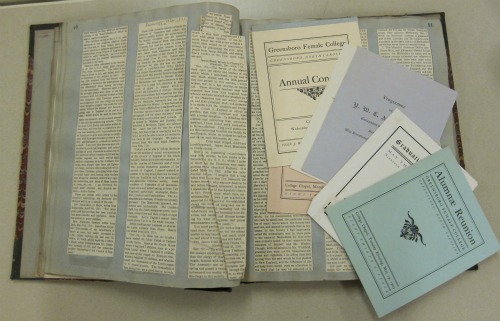 Last fall, The Devil’s Tale posted “What’s in a Name,” where readers were asked to vote on their favorite name from a list accumulated from across our collections. The winner (although votes are still being accepted!) was Dred Peacock.

Peacock graduated from Trinity College (now Duke University), married the daughter of a Trinity professor, and eventually became President of the Greensboro Female College. Peacock and his wife, Ella, created an immense library which they established at the Greensboro Female College in memory of their daughter Ethel, who’d died at a young age. The Peacocks stipulated that should the College close, they could remove their collection and establish it elsewhere. Years later, when it appeared the College would in fact close its doors, the Peacocks moved their library to Trinity College, which by this time had moved from Randolph County to Durham.

We recently uncovered several scrapbooks created by the Peacocks. They contain clippings, programs, and invitations from the late 19th century and largely relate to events and news regarding Greensboro Female College and Trinity College. One clipping that caught my eye highlights the professions of Trinity graduates by 1887: 275 graduates went into the ministry, 49 went into law, 66 went into teaching, 20 went into medicine, 11 went to the quill, and the rest to merchandising and agriculture. Of its alumni, 5 were judges, 7 were solicitors, 11 were either presidents or professors of leading colleges, 49 were members of legislatures of different states and territories, and several were in congress from 2-8 years.

Curious about the other fascinating items contained in the scrapbooks? They are now available for use in the Rubenstein Library’s reading room. Check out the online finding aid for more details about the scrapbooks1

Defeating the Demon Deacons in the 1930s
To Be or Not to Be (Vaccinated)?
Dispatches from the Newspaper Project