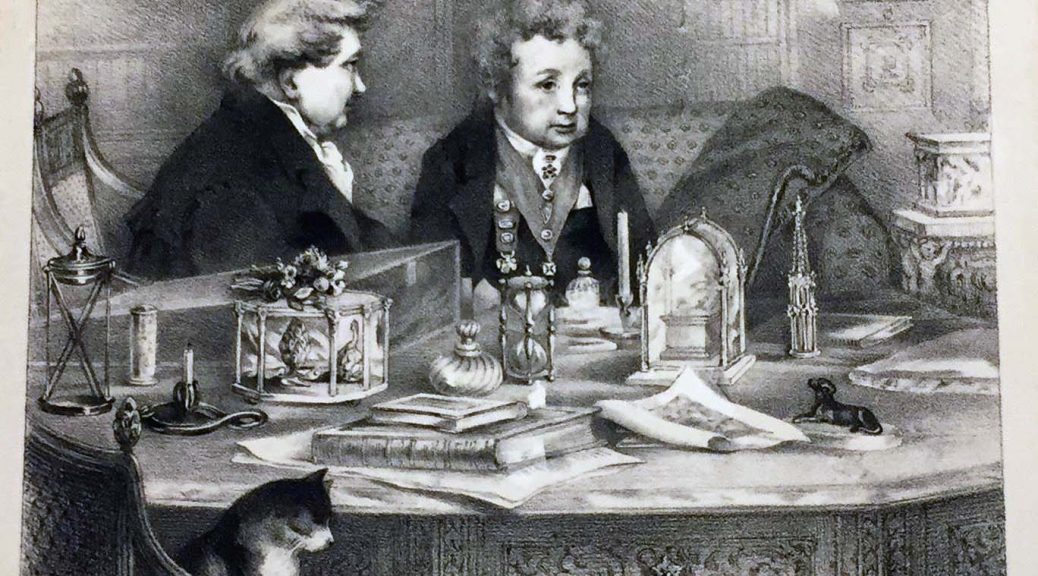 Eleanor Butler was the youngest daughter of the Earl of Ormonde of Kilkenny Castle in Ireland. Her siblings wed and secured their family’s future, but in 1778 39-year-old Eleanor had no plans to marry. Her brother threatened a nunnery and life in a convent for Eleanor.

Twelve miles away, 23-year-old orphaned Sarah Ponsonby, was facing the unwanted sexual advances of her cousin and guardian Sir William Fownes. As Lady Betty Fownes became ill, Sir William was waiting for the day he could call Sarah his new Lady Fownes.

Both women were trapped in unbearable situations. The Ladies met in 1768, Eleanor was appointed Sarah’s tutor and the two formed a deep friendship. They decided to run away to England together and missed the ferry, forcing the two women to hide in a barn. They were caught and taken home. When Sarah became ill, Eleanor ran away to Sarah’s home at Woodstock and hid in Sarah’s bedroom, where Sarah’s maid Mary Carryll smuggled food in to the room. Eleanor was found again, but her family refused to take her back. After a few days, Sarah’s family let them go. The Butlers agreed to provide Eleanor with an annual income of £200, and Sarah’s beloved cousin, Mrs. Sarah Tighe, agreed to a yearly supplement of £80.

In 1778, the Ladies, along with their maid Mary, eloped to the rural vale of Llangollen in Wales and settled down for a life of “delightful retirement.” The Ladies redesigned their cottage in the Gothic style, and spent 50 years studying literature, learning languages, and piecing together a collection of woodcarvings and other works of art. The letters that make up the majority of the Ladies of Llangollen collection in Rubenstein Library are written from Sarah to her cousin, Mrs. Sarah Tighe, who hesitantly accepted the Ladies’ lifestyle.

The two Sarahs wrote to each other for the remainder of Ponsonby’s life about their lives in Ireland and Llangollen. Tighe kept Ponsonby abreast of political happenings (revolutions and counter-revolutions in Ireland between the 1770s and 1820), as well as social and family matters at home, while Ponsonby told Tighe of her idyllic life iwth Eleanor reading, gardening, and enjoying the culture in Llangollen.

Despite their hopes to live a life of quiet retreat, their elopement catapulted the Ladies into the nineteenth century press. The highest echelons of cultural and social elites found their way to the door of the Ladies home, Plas Newydd. They entertained up to 20 visitors a day; William Wordsworth, Lord Byron, the Duke of Wellington, Sir Walter Scott and even Queen Charlotte all came to talk and spend time with the Ladies of Llangollen. Questions about the nature of the Ladies ‘romantic friendship,’ circulated around this extraordinary pair both during and well after their lifetimes. Eleanor was described as masculine, while Sarah was seen as more feminine, but once in Llangollen, both cropped their hair and wore dark riding habits. The Ladies shared a home and a life of devotion in their retreat at Llangollen. Eleanor Butler died on June 2, 1829 and three years later Sarah Ponsonby died in December of 1832. Upon Sarah’s death, Plas Newydd was publicly sold.

In addition to the letters in the collection, the Ladies of Llangollen, their home, and Llangollen itself are thoroughly documented in drawings, photographs, and print materials produced throughout the nineteenth and twentieth centuries. Their position as courageous and audacious Irish aristocrats who broke away from the constraints of convention gained them substantial notoriety.

This collection, especially the objects and printed material, capture the world’s curiosity about the Ladies’ life. Their images were printed on tea cups, figurines, prints, and postcards, and their story was told and retold in accounts by neighbors, friends, and visitors to Llangollen. As a result, Llangollen became a destination and an ongoing source of fascination because of the two ladies who risked everything to live the life they always dreamed of, together.

The newly-processed Ladies of Llangollen collection was received as part of the Lisa Unger Baskin collection in 2015.