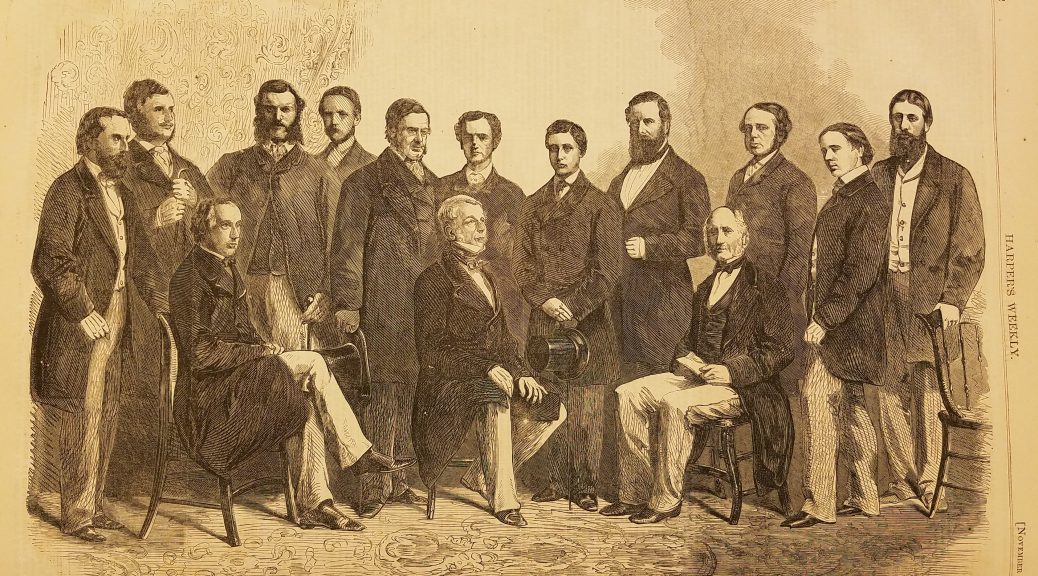 Sounds familiar, doesn’t it? Okay, maybe we don’t typically use the word “mendacious” (which means lying) much anymore, but this quote sounds like it could be about a current headline. It reflects an incredibly divided country in which words were a weapon used to condemn everyone and everything on the other side. This quote, though, is from December 1860 and refers to an account of a mob meeting the Prince of Wales during his visit to Richmond, Virginia. The letter was written by John Rutherfoord, a prominent political figure in Virginia, in response to his English cousin’s question about the reports he had heard that a mob met the prince in Richmond.

The report in question was an article published in the New York Times on “The Prince’s Visit to the United States. The Richmond Mob and the Irish Insult.” Despite Rutherfoord’s furious denials of the report as an outright “malicious fabrication” by a reporter for the “venomous Abolition Journal” the New York Times, the article was actually originally published in the London Times and focuses primarily on anti-Irish prejudice. The author assured his readers that most Americans were disgusted by “the Richmond mob” and had “no sympathy with the acts of Irish emigrants in New-York.” Even the author’s description of events in Richmond revolved around anti-Irish sentiment: he thought the mob could have been “stirred up by some Irish or semi-Irish demagogue.” According to the author, the “disorderly mob” pressed constantly on the prince and his party and threw insults at them. After saying that lower-class southern whites were the most “ruffianly and depraved” in America, he then painted a picture of the mob for his readers: “Fancy a mob of four or five hundred slave-dealers, horse-dealers, small planters, liquor-store keepers, and loungers, together with, probably, a large sprinkling of blackguardism from Ireland.” The rest of the article had a similar anti-Irish tone, focusing on the response to fears of a similar situation with Irish immigrants in New York City.

As you might expect, Rutherfoord was furious at the depiction of his fellow southerners, particularly since the event took place in his own city of Richmond. He informed his cousin that even though the prince’s visit was not anticipated or expected, of all cities in the U.S., the prince would have been the most welcome and hospitably entertained in Richmond. He described the last-minute preparations to honor the prince and his party during his visit: from a military escort to the best accommodations in the city. However, the prince asked for no public ceremony or reception and had already found accommodations. He informed his cousin that though there was a crowd to see the prince, “the greatest order & decorum” prevailed, and that even the press of the crowd upon him was not as great as that “by the ruder population of the larger cities in the north.”

This last statement provides a clue about the real reason for Rutherfoord’s anger at the Times and their “mendacious scribbler.” He wrote this letter just over a month after Abraham Lincoln was elected president and just two days after South Carolina’s secession convention unanimously voted to secede from the United States. Not only did he call the New York Times a “venomous Abolition Journal” that constantly vilified the South, but he argued that the North’s “white slaves” were “inferior to our colored slaves in decency and good manners.” The final two-thirds of the letter focused on a second question that his cousin had asked: what he thought of Abraham Lincoln’s election.

Rutherfoord was a wealthy, white, slave-owning southerner. Though his brother-in-law Edward Coles had freed the enslaved people he inherited and, as governor of Illinois, had gotten abolition written into Illinois’s state constitution, Rutherfoord and the rest of his prominent Virginia family were certainly not abolitionists. He told his British cousin, that not only was Lincoln a “third rate Western Lawyer” who was a “small caliber” politician but also that Lincoln’s election was “a great national calamity” that “seriously threatens the dissolution of the American Union at no distant day” and may bring “a disastrous civil war” without a peaceful separation of states. According to Rutherfoord, the southern states were completely faultless in the situation. In fact, he placed the blame squarely on the “sectional party” of Lincoln whose policies would completely ruin the South. More than that, though, Rutherfoord placed the blame for the system of slavery with two groups: England, who introduced slavery to the American colonies, and the northern states. He argued that though Virginia and the rest of the South wanted the abolition of the international slave trade in the Constitution, northern states like Massachusetts insisted that the slave trade should continue for twenty years. He stated that during those twenty years, the northern states imported more than 100,000 slaves, which they sold to southern masters after realizing that free labor was more lucrative and suitable for their states. His description of events makes it clear that in his view any reports that stated otherwise (especially if communicated by abolitionists or other northerners) were unequivocally false.

What can we take from this rambling letter full of exaggerations, stereotypes, and misinformation? Just like the Times article was really a forum to vent anti-Irish prejudice, Rutherfoord’s letter was a place to vent his anger and frustrations with the North. It was a place to set the record straight (at least in his view) about the roots of sectional tensions in the U.S. and the role slavery played in that. While Rutherfoord tried to convince his cousin that the South was the wronged party, his justifications for sectional tensions and possible secession were all about one thing: the threat posed by Northern states (and particularly the Republican Party) to the continued existence of the system of slavery. And so we return to the opening quote: a “malicious fabrication” by a “mendacious scribbler for the ‘New York Times.’” The Times, as a “venomous Abolition Journal” could not be trusted to provide the truth. Any reports about the South were, quite simply, malicious lies.