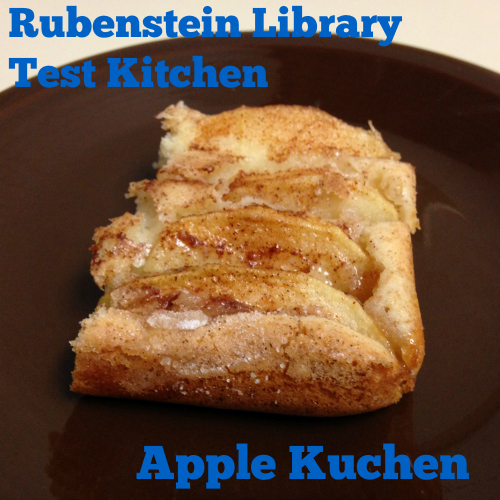 Happy Oktoberfest!  To kick off our Rubenstein Library Test Kitchen series, I prepared a recipe to celebrate the German festival, which runs this year from September 20th to October 10th.

The Recipe and Duke History

I found a recipe for apple kuchen, or apple cake, in the Ted Minah Papers.  The recipe was grouped with a series of recipes apparently intended for Duke’s Woman’s College, [1] ranging from barbecued meatballs to a lemon soufflé pudding.  Although a sweet cake, interestingly, the recipe was labeled as a bread recipe rather than a dessert. The recipe helped me learn more about some of the culinary history at Duke, especially about the influential Theodore W. “Ted” Minah.  Minah was the director of Duke University Dining Halls from 1946 to 1974. By his retirement in 1974, Minah had transformed the dining halls at Duke University from a small operation to 12 dining halls serving approximately 15,000 meals each day.

The context for the recipe collection wasn’t clear – the ingredient proportions were for smaller portions, usually 4 to 6 servings.  Since it was coming from the collection of the Dining Hall director, I expected the recipe to be scaled to serve large groups of students, but perhaps the recipes were designed for a Woman’s College cookbook?  I’ve seen university-related cookbooks in other collections, like the “Culinary Casebooks” in the Duke Law Dames records (possibly a topic for a future “Rubenstein Library Test Kitchen” post!).

Like many older recipes, it was short and to the point – no lengthy descriptions of methods or ingredients to coddle the home cook.  I did encounter an interesting culinary term I’d never seen before, but which continues to appear in other archival collections I’m processing: Oleo.  Oleo was a common colloquial term used to refer to margarine, whose full name is oleomargarine.  I admit that I strayed from the recipe and used butter rather than margarine, but that substitution didn’t seem to hurt the recipe.

As often happens in the archives, I learned a variety of interesting new facts that I would have never guessed I’d encounter – from the history of the university, to colloquial cooking terms! Overall, the recipe was perfect for fall – the tart apples, cinnamon, and somewhat unusual cake batter made a tasty seasonal treat.  The recipe was easy and quick to make, used common ingredients found in any grocery store, and should appeal to even the pickiest eater. Stay tuned for more tasty recipes from our collections!

A Long and Happy Life
'We Try Harder' and Other Famous Ad Campaigns by Paula Green
Bitter Sugar: The plight of cane-cutters on Radio Haiti