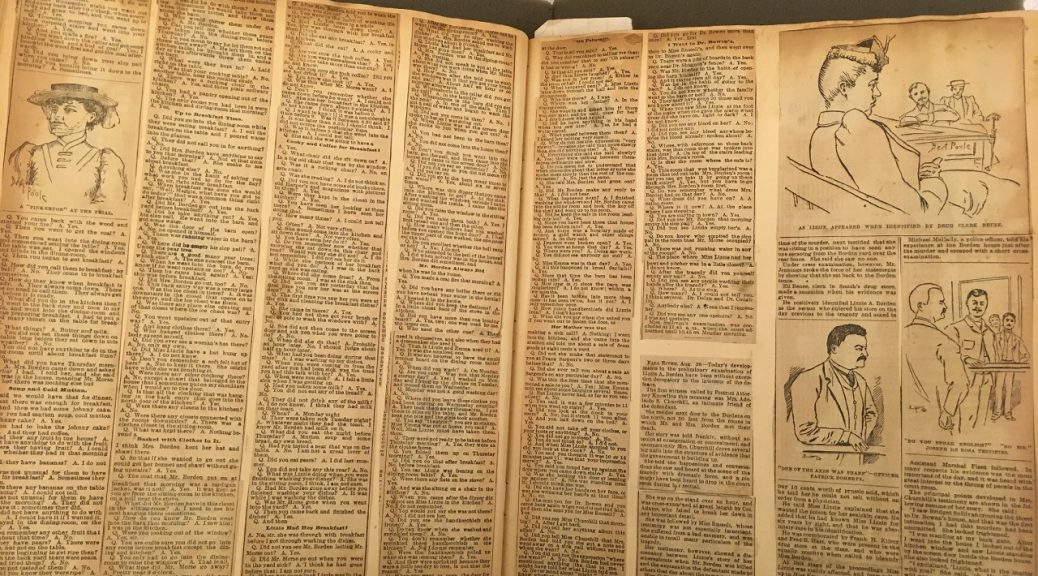 On August 4, 1892, Andrew and Abby Borden were found after being murdered with an ax. Andrew’s daughter Lizzie was immediately suspected and she was subsequently tried for the couple’s murders. The public was entranced with the grisly crime and Lizzie Borden’s trial. Many were unpleasantly surprised when she was acquitted of her father’s and stepmother’s murders. Lizzie Borden continued to live in her hometown of Fall River, Massachusetts, until her death even though she was ostracized by the community.

Even since her death in 1927, Lizzie Borden has continued to catch the public imagination. In the 126 years since Bordens’ murders, there have been books, podcast episodes (for example, Unsolved Murders Episode 23), movies, and even an opera which tells the gruesome story of the the Bordens’ murders. The Duke Libraries holds dozens of works inspired by the story of Lizzie Borden.

Here at the Rubenstein Library, we have a few different items related to Lizzie Borden and her trial, including a two-volume scrapbook that details Lizzie Borden’s trial through contemporary newspaper clippings. Although we are not certain who compiled the scrapbooks, their existence is evidence of the public’s fascination with the Borden murders from the beginning and the attention that was paid to Lizzie’s trial.

The Lisa Unger Baskin Collection includes a brief manuscript relaying events in Fall River surrounding the two murders  and an autograph album collected by Jennie Nuttall, a resident of Fall River, MA, which includes a verse and signature by Borden from before the murders took place. This volume will be included in 500 Years of Women’s Work: the Lisa Unger Baskin Collection exhibit opening at the Rubenstein on February 27, 2019.

We also have an album in the Bobbye S. Ortiz Papers featuring a song about Lizzie Borden, as sung by the Chad Mitchell Trio!

As evidenced by the release this year of film entitled Lizzie inspired by her story, Lizzie Borden continues to be a figure of macabre fascination to many. Her story and the stories of the murders are retold time and time again.