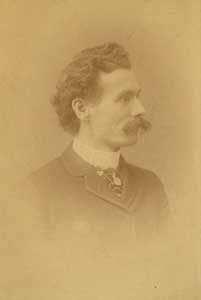 In a recent appearance on Jeopardy!, former Rubenstein Library intern Josh Hager announced that he had discovered a previously unknown image of John Wilkes Booth in the James Thomas Powers papers at Duke. That would have been exciting—if it were true.

Hager thought there was a resemblance between the man in the image and the images of Booth he found online, and he wrote a post about the apparent resemblance on this very blog in 2010. This was jumping the proverbial gun—on the blogger’s part as well as ours. More work was needed to verify this conclusion. And indeed, a little further research confirms that the image is not Booth. We appreciate the comments from those who saw Hager on Jeopardy! and then wrote us to question the accuracy of the post. They are right—we never should have published it. In the interest of setting the historical record straight (and protecting the innocence of the unknown man in the photo), we have taken it down and added this new post.

5 thoughts on “What’s Not a Photograph of John Wilkes Booth?”