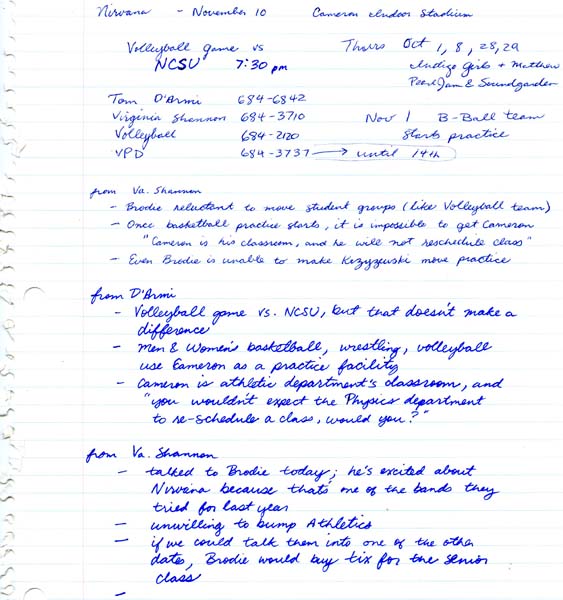 Hello again from the Duke University Union records!  When last we met, I told you about a mysterious memorandum concerning CORE and the fact that it was not known to suffer from any communist infiltration.  Now, I have an equally interesting tale, involving an unlikely cast of characters: President Keith Brodie, Coach K, and Nirvana.

This undated paper was in a folder titled simply “Concerts Lost.”  It details the negotiations that apparently took place before it was decided not to book the willing-to-play Nirvana at Duke.

While the document more or less speaks for itself, I will highlight two of my favorite excerpts:

“Even [President] Brodie is unable to make Krzyzewski move practice.”

“If we could talk them into one of the other dates, Brodie would buy tix for senior class.”

Buried deep within the record is a notation that helps us to date the document as being from 1991: “talked to Brodie today; he’s excited about Nirvana because that’s one of the bands they tried for last year.”  This is a key clue in dating the record for the following reasons:

Nirvana, of course was a band that was riddled with both controversy and tragedy.  Frontman Kurt Cobain famously battled a heroin addiction and, in 1994, committed suicide.  However, Nirvana is also largely credited with expanding the grunge—and later, alternative—rock genre beyond the Pacific Northwest.

Unfortunately, the story of Nirvana at Duke is found only in records of the Duke University Union, in a folder entitled “Concerts Lost.”  A final note about this record: Duke won the 1991-1992 seasons National Championship for men’s basketball.  Apparently those unmoveable practices paid off that year.

4 thoughts on “Nevermind: The Concert That Wasn’t”