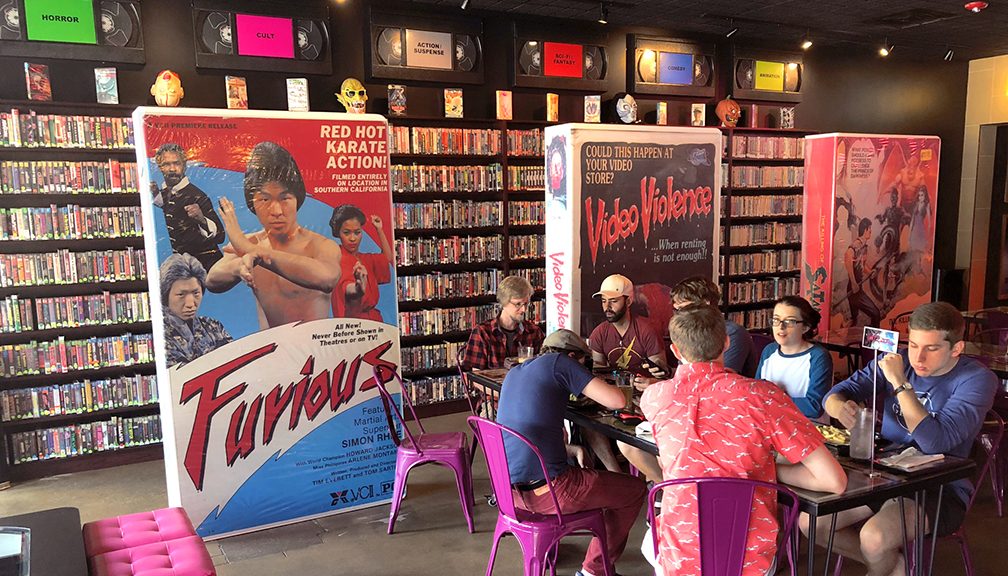 When Duke students tour the Digital Production Center, I always show them our video digitization system, and point out that Duke Libraries’ collection of U-matic, VHS and Betacam analog videotapes are ancient relics from the last century. This fall’s first-year students were born in the new millennium. They have little use for physical media, except for perhaps an occasional external thumb-drive. Their concept of video is something you capture on your iPhone or stream online, not play using a crude plastic rectangular-shell. And rewinding videotape? “Like… what is that?, it’s so… weird!”

So, imagine my surprise when I recently walked into Raleigh’s brand new Alamo Drafthouse Cinema, and entered their Video Vortex, a massive library of over 75,000 video titles on VHS and DVD, that are free for customers to check out and watch at home. Video Vortex even rents out VHS players, another historical artifact. This may seem odd at a time and everyone is streaming movie content online. But, Video Vortex specializes in movies you can’t get from Netflix, Amazon and other streaming services. Many of their titles are out of print, and some of these films were never released on DVD, or in any digital format, so the only way you can see them is on VHS.

Walking through the VHS collection is like going to a run-down grindhouse movie theater in 1975, or tuning into an obscure cable-TV channel at 3 A.M. in 1987. Many of the films would be classified as “exploitation:” cheaply-made horror, cult or action titles that never had a chance at the Oscars, and are “so bad, they’re good,” like “Blood Orgy of the Leather Girls.” But there’s also critically acclaimed films like Frank Perry’s “Last Summer,” which earned an academy award nomination in 1969. Due to copyright issues or lack of funds, these two films have never made it into the digital realm, and can only be seen on VHS.

Josh Schafer is co-manager and “VHS Culture Captain” of Video Vortex. He moved here from New Jersey to work in the vortex, because he’s a longtime connoisseur and expert on the VHS format, and even publishes a VHS fanzine called “Lunchmeat.”

“The whole goal here is to not just reimagine the video store, and give people that feeling and experience again, but also give people this library, this community asset where both film-lovers and the casual movie-goer alike, can come in and explore all kinds of cinema, for free,” says Schafer. The Alamo’s lobby, where Video Vortex lives, is decorated with rare movie posters, giant VHS facsimiles, and has tables where film-nerds can congregate, order from the Alamo’s full kitchen and bar, and discuss their favorite obscure animation titles.

Skip Elsheimer of AV Geeks has taken on the job of helping to maintain the Video Vortex collection, which involves cleaning off mold, splicing tape, fixing cases and repairing DVDs. “A lot of these videotapes and DVDs were boxed up for years in storage spaces that were not ideal,” says Skip. “We do TLC on these titles, many of which don’t exist in any other format.”

DVDs are actually harder to fix and reclaim than videotape. Skip says the rescue rate of VHS is about 90%, because he can swap out tape, put it in a new cassette case, splice it, etc. But once the lamination separates on a DVD, or if there’s a significant scratch, it’s toast, because the laser can no longer read the data, and there’s no way to retrieve it. So much for the idea of digital = permanent. Or as the VHS Culture Captain says, “only analog is real.”

In addition to Video Vortex, Alamo Drafthouse Cinema offers a mix of first-run, independent and vintage films on 11 screens. The comfy theater seats recline, and customers can order an eclectic mix of foods, cocktails, craft-beers and wine, right from their seat. Most everyone who works at Alamo is a movie fan, and it shows in everything from the vintage movie posters that line the walls, to the enthusiasm of the employees. The only way to dampen that enthusiasm is if you talk or text in the theater, because, after one warning, you will be asked to leave, as explained in this colorful public service announcement.