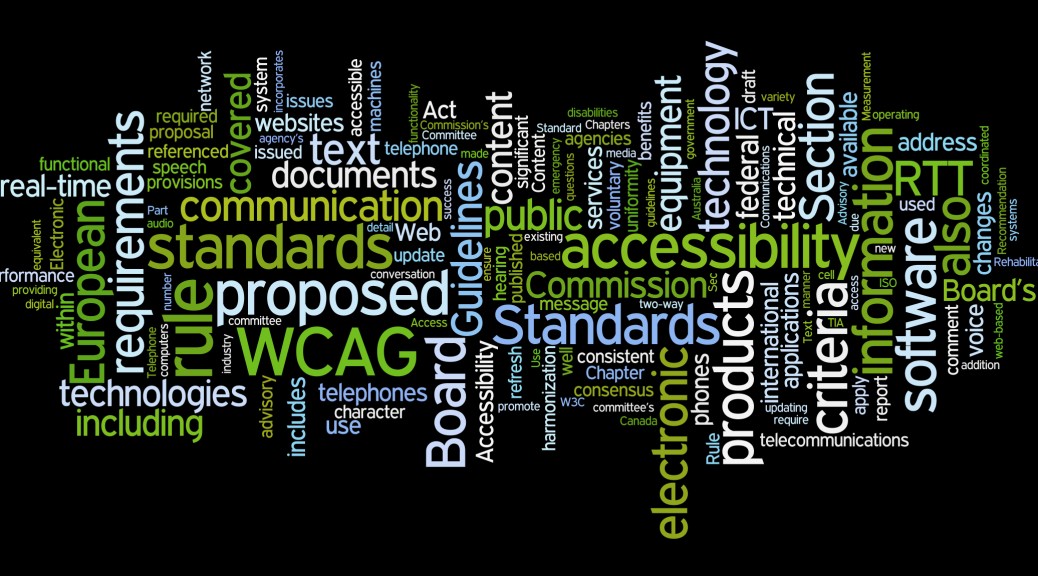 Web accessibility is something that I care a lot about. In the 15 some odd years that I’ve been doing professional web work, it’s been really satisfying to see accessibility increasingly becoming an area of focus and importance. While we’re not there yet, I am more and more confident that accessibility and universal design will be embraced not just an afterthought, but rather considered as essential and integrated at the first steps of a project.

Accessibility interests have been making headlines this past year, such as with the lawsuit filed against edX (MIT and Harvard). Whereas the edX lawsuit focused on section 504 of the Rehabilitation Act of 1973, the web world and accessibility are usually synonymous with section 508. The current guidelines were enacted in 1998 and badly in need of an update. In February of this year, the Access Board published a proposed update to the 508 standards. They are going to take a year or so to digest and evaluate all of the comments they have received. It’s expected that the new law will be published in the Federal Register around October of next year. Institutions will have six months to make sure they are compliant, which means everything needs to be ready to go around April of 2017.

I recently attended a webinar on the upcoming changes that was developed by the SSB Bart Group. Key areas of interest to me were as follows.

WCAG 2.0 will be base standard

The Web Content Accessibility Guidelines (WCAG) are general a more simplified yet also more strict set of guidelines for making content available to all users as compared to the existing 508 guidelines. The WCAG standard is adapted around the world, so the updated rule to section 508 means there will be an international focus on standards.

Focus on functional use instead of product type(s)

The rules will focus less on ‘prescriptive’ fixes and more on general approaches to making content accessible. The current rules are very detailed in terms of what sorts of devices need to do what. The new rule tends to favor user preferences in order to give users control. The goal being to try to enable the broadest range of users, including those with cognitive disabilities.

This applies to anything that will be publicly available from an institution, including things like PDFs, office documents, and so on. It also includes social media and email. One thing to note is that only the final document is covered, so working versions may not be accessible. Similarly, archival content is not covered unless it’s made available to the public.

These standards will apply to software and frameworks, as well as mobile and hybrid apps. However, it does not apply specifically to web apps, due to the WCAG safe harbor. But the end result should be that it’s easier for assistive technologies to communicate with other software.

This means that editing tools like Microsoft office and Adobe Acrobat will need to output content that is accessible by default. Currently it can take a great deal of effort after the fact to make a document accessible. Often times content creators either lack the knowledge of how to make them, or can’t invest the time needed. I think this change should end up benefiting a lot of users.

In general, the intent and purpose of these changes help the 508 standards catch up to the modern world of technology. The hopeful outcome will be that accessibility is baked in to content from the start and not just included as an afterthought. I think the biggest motivator to consider is that making content accessible doesn’t just benefit disabled users, but rather it makes that content easier to use, find, etc. for everyone.