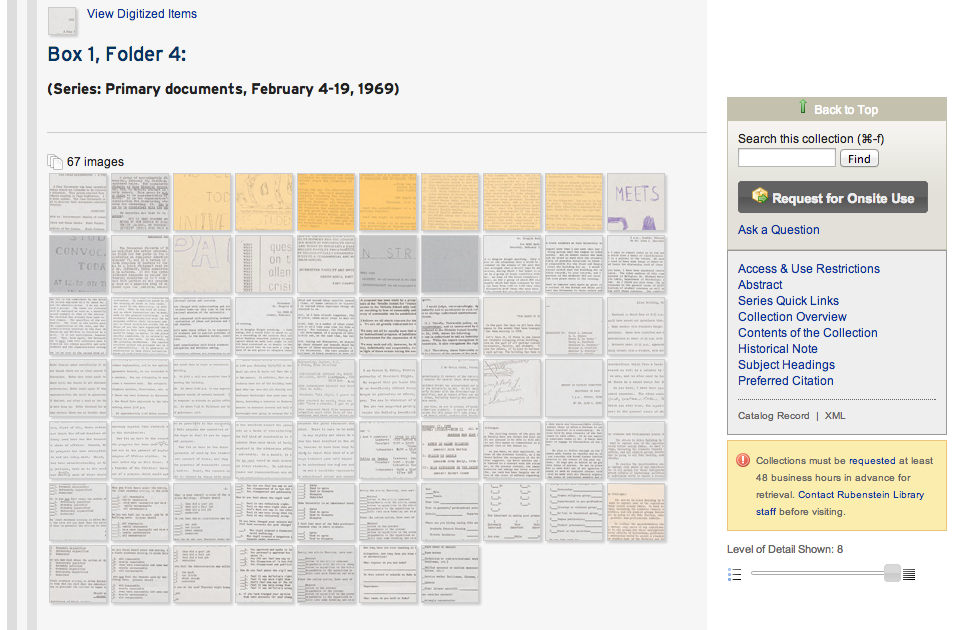 Back in February 2014, we wrapped up the CCC project, a collaborative three year IMLS-funded digitization initiative with our partners in the Triangle Research Libraries Network (TRLN). The full title of the project is a mouthful, but it captures its essence: “Content, Context, and Capacity: A Collaborative Large-Scale Digitization Project on the Long Civil Rights Movement in North Carolina.”

So how large is “large-scale”? By comparison, when the project kicked off in summer 2011, we had a grand total of 57,000 digitized objects available online (“published”), collectively accumulated through sixteen years of digitization projects. That number was 69,000 by the time we began publishing CCC manuscripts in June 2012. Putting just as many documents online in three years as we’d been able to do in the previous sixteen naturally requires a much different approach to creating digital collections.

There are some considerable tradeoffs between document availability vs. discovery and access features, but going at this scale speeds publication considerably. Large-scale digitization was new for all four partners, so we benefited by working together.

Here are some of the more interesting findings (consult the full reports for details):

Since the moment we began putting our CCC manuscripts online (June 2012), we’ve completed the eight CCC collections using this large-scale strategy, and an additional eight manuscript collections outside of CCC using the same approach. We have now cumulatively put more digital objects online using the large-scale method (96,000) than we have via traditional means (75,000). But in that time, we have also completed eleven digitization projects with traditional item-level identification and description.

We see the large-scale model for digitization as complementary to our existing practices: a technique we can use to meet the publication needs of some projects.

Do people actually use the collections when presented in this way? Some interesting figures:

It’s hard to attribute the usage disparity entirely to the publication method (they’re different collections, for one). But it’s reasonable to deduce (and unsurprising) that bypassing item-level description generally results in less traffic per item.

On the other hand, one of our CCC collections (The Allen Building Takeover Collection) has indeed seen heavy use–so much, in fact, that nearly 90% of TRLN’s CCC items viewed in the final six months of the project were from Duke. Its images averaged over 78 views apiece in the past year; its eighteen folders opened 363 times apiece. Why? The publication of this collection coincided with an on-campus exhibit. And it was incorporated into multiple courses at Duke for assignments to write using primary sources.

The takeaway is, sometimes having interesting, important, and timely content available for use online is more important than the features enabled or the process by which it all gets there.

We’ll keep pushing ahead with evolving our practices for putting digitized materials online. We’ve introduced many recent enhancements, like fulltext searching, a document viewer, and embedded HTML5 video. Inspired by the CCC project, we’ll continue to enhance our finding aids to provide access to digitized objects inline for context (e.g., The Jazz Loft Project Records). Our TRLN partners have also made excellent upgrades to the interfaces to their CCC collections (e.g., at UNC, at NC State) and we plan, as usual, to learn from them as we go.