The National Coalition for Haitian Rights (NCHR) papers documents this NGO’s advocacy for human rights in Haiti and for Haitian refugees in the United States. NCHR has conducted its mission reaching out to congressmen and international organizations to influence policy, using its connections and credibility to assist Haitians, whether in their individual immigration issues or as this recent discovery notes, to flee persecution in Haiti and reach safety.

Let’s start with a little bit of context. In 1992 Haiti democratically elected its first president ever, Jean-Bertrand Aristide, who was subsequently forced out of the country for about 6 months. A military regime came immediately into power. Human rights violations became more prevalent, particularly toward supporters of former President Aristide.

During this tumultuous period, three Haitian members of the Aristide’s political party FNCD (National Front for Change and Democracy) [whose names will be withheld for their protection], decided that, for safety reasons, they had no other option than to flee Haiti. They arrived in Guantanamo, Cuba which at that time was used as an immigration transit camp to assess the validity of asylum claims made by Haitians. The asylum process required an initial interview in Guantanamo that would assess whether an immigrant had a credible fear of persecution, and then a second interview in Miami that would assess whether this fear was well-grounded. The screening process was tough, as it is estimated that only 2% of Haitian applicants were granted asylum between 1980 and 1992.

It is in Guantanamo that the three Haitians first came in contact with NCHR. Living conditions at the camp were difficult, and several reports documented humiliating treatments, separation of families or refusal of medical care. As the founding members of the Association of Haitian Political Refugees, the three Haitians asked NCHR to witness and then advocate for better treatment of Haitian refugees inside Guantanamo’s camps. The three Haitians successfully passed the first step of the asylum process. However, accounts of mistreatment during the second interview in Miami, especially directed towards members of the Association of Haitian Political Refugees, made them refuse to submit to the second interview. Additionally, the omnipresence of the US military in the camps made many Haitians nervous about telling their stories to immigration officials.

Having abandoned the asylum process mid-way, the three Haitians were sent back to Haiti. Beatings by the police on their day of arrival confirmed their fears of political persecution. They decided to go into hiding and attempt to leave Haiti one way or another. They were unable to apply for asylum from within Haiti, and the American embassy was not a sanctuary. The three Haitians called NCHR for help.

NCHR’s strategy was first to get them into the Dominican Republic,

where the United Nations had set up a refugee camp, and then try to obtain permanent residency in the United States, Canada or another Caribbean nation. In a parallel to the American abolitionist Underground Railroad, NCHR resorted to Haiti’s own underground railroad dedicated to helping persecuted Haitians cross the border and enter the Dominican Republic. The underground railroad was managed by a priest on the Haitian side, and by a radio station on the Dominican side.

By means of the underground railroad the three Haitians arrived safely in the Dominican Republic. They were greeted by a team of lawyers, enlisted by NCHR to build their asylum case; further complicated by the three being HIV positive at a time when both the United States and Canada had a practice of rejecting asylum claims of HIV positive individuals unless a waiver was obtained.

That is the last update in the archives about the three Haitians. We do not know how significant the underground railroad was, as so far we haven’t found any other account of its use in NCHR’s archives. We also do not know whether their asylum claims have been successful, or whether they managed to get permanent residency in the Dominican Republic. Nevertheless, we have been able to reconstruct this story using a variety of documents present in NCHR archives: letters of the three Haitians to NCHR written in Haitian Creole, communication between NCHR’s Haiti and New-York teams in English, status reports coming from the underground railroad in Spanish, interview transcripts in French. This diversity illustrates the fact that the issue of Haitian rights encompasses much more than just the Haitian territory: the flow of refugees coming to the Dominican Republic and to the United States has made the protection of Haitian rights a multinational challenge.

Mary Samouelian, the Heschel Processing Archivist here at the Rubenstein Library, has created a short documentary. “The Guardians of History” features seven archivists working in our Technical Services Department and explores why archivists do what we do.  In Mary’s words, the documentary “reveals our intimate relationship with the historical materials we work with, why we are drawn to the mission of preserving history, and how our work makes it possible for researchers, historians, writers, and the general public to discover and experience intimate connections between their lives and historical materials.”

Mary enrolled as a student at the CDS in 2011 and this documentary piece is her final project for the Certificate in Documentary Arts. The photographs associated with the documentary will be exhibited on the Student Wall in Perkins Library this coming Friday.

Congratulations to Mary on this wonderful work! 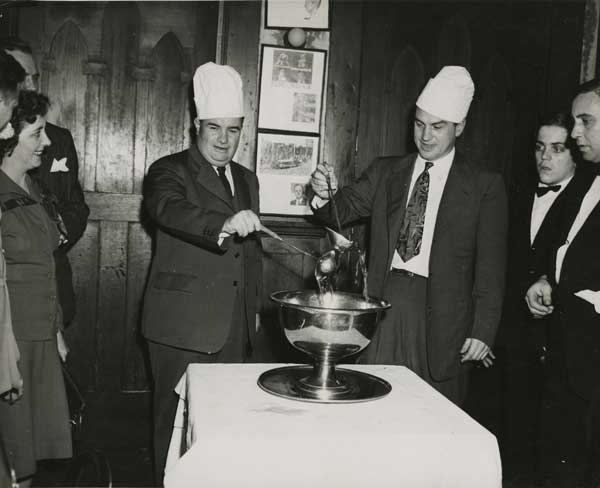 This past week, many of us from the Rubenstein—including the entire staff of the Duke University Archives—has been in New Orleans for the annual conference of the Society of American Archivists.

When we haven’t been attending presentations on the latest and greatest in our profession or meeting our fellow archivists, we’ve been exploring this awesome city. A few evenings ago, we stumbled upon a familiar place. The venerable Antoine’s has stood in New Orleans’s French Quarter since 1840. And, of course, archivists have a soft spot for old things! The restaurant is familiar to those of us in the University Archives because of Eddie Cameron—specifically, a scrapbook of photos, clippings, and ephemera from the Duke football team’s trip to play in the 1945 Sugar Bowl. Among the pre-game celebrations was a dinner at Antoine’s with the team’s University of Alabama opponents. Most of us will be leaving today, to return to our normal Durham lives of collecting, processing, cataloging, answering questions, teaching, and, well, helping to make the Rubenstein the great place that it is. But we’ll be back here soon, we hope! Thank you, New Orleans, and thanks, Antoine’s, for reminding us of a fun evening in Duke’s history! 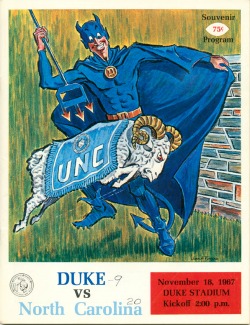 The fighting spirit of Blue Devil competitiveness doesn’t apply to only basketball and other sports—we’re  staging a little (Facebook) battle royale of our own:

The rules are very simple. Whichever institution gets the most NEW “Likes” for their Facebook page between today and tipoff (7:00 PM) for the March 3rd Duke vs. UNC basketball game wins! The winner will bask in electronic glory, while the loser will be required to change their Facebook profile to an image of their opponent’s choice. Big stakes, indeed.

So if you haven’t already, pop over to Facebook and “Like” the Duke University Archives page. Share the word with your friends so we can defeat our powder blue foes! Of course, you’ll also get the pleasure of learning more about Duke history while you’re at it—seems like a win/win all around. 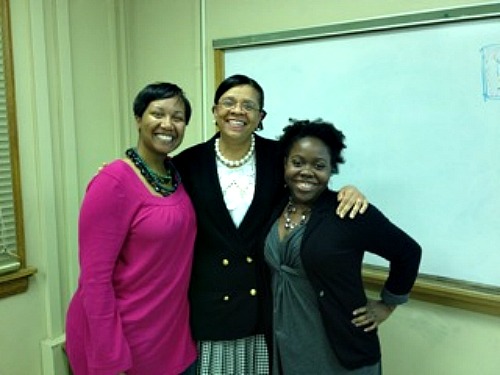 Rubenstein Library staff visited our neighbors in Chapel Hill last week to speak on two panels sponsored by UNC-Chapel Hill’s Student Chapter of the Society of American Archivists (SCOSAA).  Jenn Thompson, the Research Services and Collection Development Librarian for the John Hope Franklin Research Center for African and African American History and Culture, spoke on November 7 about the Franklin Center’s collections as part of a panel entitled “Diversifying the Archives.”  Naomi Nelson, the Rubenstein’s Director, spoke on November 10 about reappraisal of archival materials with colleagues from UNC’s Wilson Library.  For more information on the panels, see SCOSAA’s blog (linked above) or their Facebook page.