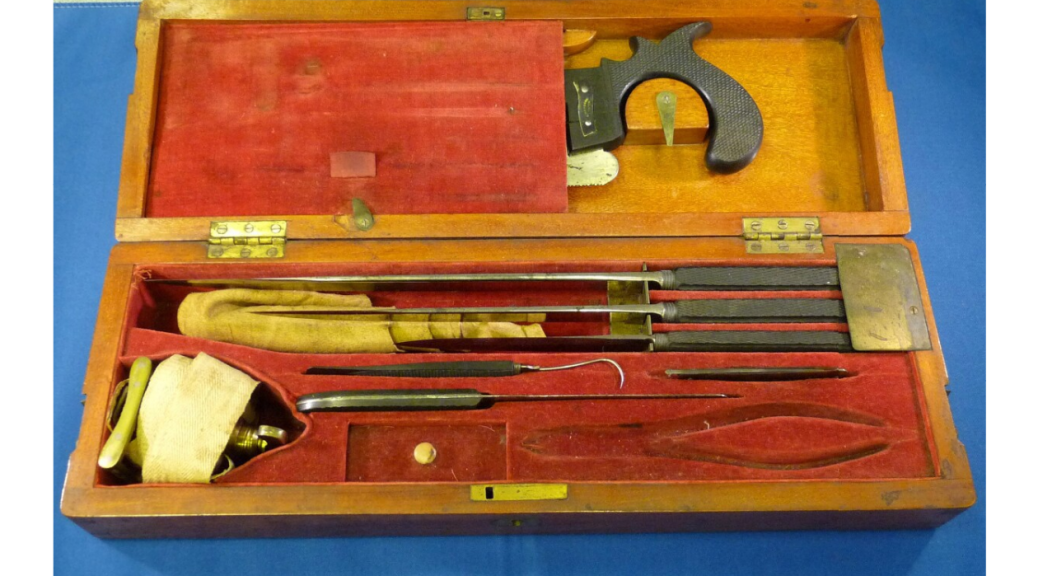 “There may come to me fresh blooming flowers, but I’ll love the faded bud best.

For it slept one night in the moonlight, on the sod upon his breast.”

I am a little over a month into my internship at the History of Medicine Collections at the Rubenstein Rare Book & Manuscript Library. In my short time working in the collection, I’ve been able to handle incunabula (books printed prior to 1501), surgical tools dating back to the 16th century, and a wide range of artifacts preserving the history of medicine, health issues, biomedical science, and disease in a global context.

A library science degree with a focus in special collections is a career change from my decade of experience working in K-12 education. Being a history teacher for most of my career I had always been interested in battlefield medicine, especially throughout American history and the Civil War(1861-1865).

For most people with an interest in Civil War history, the treatment of wounded and injured soldiers is of particular interest. A search of the History of Medicine artifacts collection will lead you to several surgical and amputation saws donated to the Rubenstein Library.  As I mentioned previously, one of the surgical saws dates back to the 16th century and could require two people to operate while the collection also houses an amputation saw from the late 1890s.

Another surgical saw is titled: “Amputation set, early to mid-19th century”.  The set is made up of at least 8 different pieces including a large surgical saw, a tourniquet with leather paddings to make the procedure more “comfortable” and four large knives that more resemble a modern set of kitchen knives than ones used to amputate a soldier’s limb. The set comes in a wooden box with a brass plate and an engraving with initials: B.F.C. Its contents were purchased through S. Maw and Son – a medical supply company operating out of London and featured prominently on the saw and knife handles. The wooden set was donated through the Alphonsus Cobb Collection, son of Benjamin Franklin Cobb.

The youngest son of Benjamin F. and Winifred Cobb, Alphonsus moved to the city of Durham around the turn of the 20th century. Throughout his time in Durham, Alphonsus would serve as a hotel manager and local businessman in real estate and insurance until his death in 1935. A look through collection control files revealed a folder with a detailed history of the Cobb family, historical columns written in local newspapers, and a poem written by Winifred, Benjamin’s widow, on the day of his burial. Not much survives of his record in the Confederate Army nor is there much information about Alphonsus, except for information about his business history in Durham.

Dr. Josiah C. Trent, whose original collection of medical books, manuscripts and artifacts helped to establish the History of Medicine Collections, hoped to create a collection that celebrated and studied the history of surgery. No doubt an artifact such as an amputation saw from the Civil War era would be a good fit for the collection.

The battlefields of the American Civil War saw nearly 60,000 amputations, roughly 75% of all surgeries performed in the conflict. Used as a method to prevent disease and infections such as gangrene, survival could depend on factors such as the location of the wound and when treatment was administered.  Though rudimentary by today’s standards, amputations during the Civil War were “sophisticated” procedures conducted with patients under anesthesia (chloroform or ether) and  “one of the quickest, most effective ways for surgeons to treat as many patients as possible.” Still, the harsh conditions of performing surgeries in the battlefield hospitals led to the reputation of surgeons and doctors acting more like “butchers” and soldiers fearing the short and long-term ramifications of an amputation.

Our saw’s owner, Benjamin F. Cobb was born into a slave owning family (1830 Census)  in Wayne County, NC in January, 1826 and completed his medical training at Jefferson Medical College in Philadelphia in 1847. The 1850s would see Dr. B.F. Cobb in a general medical practice with a focus on obstetrics in Duplin Co., NC. In April of 1862, a year into the Civil War, Dr. Cobb was commissioned as a surgeon in the Provisional Confederate Army and would serve across the state of North Carolina until the end of the Civil War. Dr. Cobb was stationed as a Confederate Surgeon in Goldsboro, Fort Anderson, Smithville, Penders Hospital, and Fort Caswell until his capture in March 1865 and eventual loyalty oath in May of 1865. One can only wonder whether the “Amputation set” in the History of Medicine Collections was present as Dr. Cobb attended to wounded soldiers.

Today, the amputation set owned by Benjamin F. Cobb and donated by Alphonsus to Duke University serves as a hands-on teaching tool for students at Duke University in learning the ways that surgery has evolved over the last few centuries.  When opening the finished and well designed wooden box holding the amputation saw and accompanying instruments, it’s easy to step back in history and imagine a world where physicians grappled with decisions regarding the need for an amputation and  the thousands of soldiers whose lives were forever changed by the war and surgical procedure.