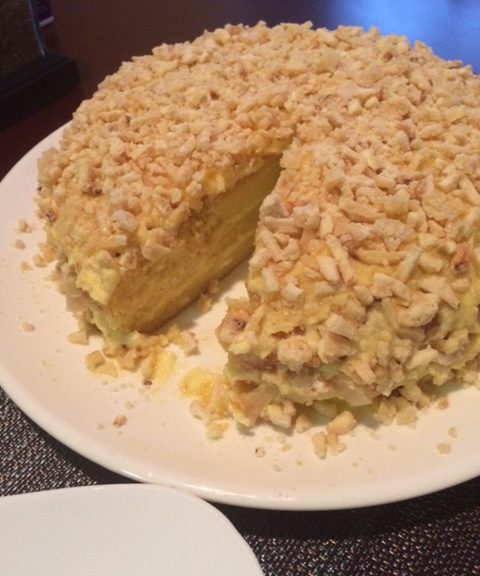 For my last Test Kitchen post , I attempted a Mexican-Italian fusion recipe from the 1940s. That mostly worked out (destroyed spatula notwithstanding) so I decided to continue with the international cooking theme. Luckily, the Rubenstein Library is a very worldly place. The library has 27 cookbooks  published by Time-Life Books as part of their Foods of the World  series in the 1960s and 1970s. These heavily illustrated books combine cooking instructions with travelogues and food histories. The books usually cover each region of a country and describe how to properly throw a party there.

Our Foods of the World holdings include cookbooks covering the foods of the great American West, Africa, France, the Middle East, China, and the British Isles. With so many choices, making a recipe decision was tough. I briefly considered a kulebiaka (a flaky cabbage loaf from Russia) which is, apparently, considered a “food of the people.” The Russian cookbook also contained a decent amount of beet-based recipes that were pretty hard to pass up. The cuisine of nearby Scandinavia (also lots of beets) piqued my interest. It involved a lot of pickled things, dishes served with a side of raw eggs, and much of it was described as “food for a man’s appetite.” Could I even handle that? I wasn’t sure.

Ultimately, I decided to tackle the food of the German people. I don’t really know much about German cuisine. I know that sausages and beer are important, but I assume they eat other things from time to time. 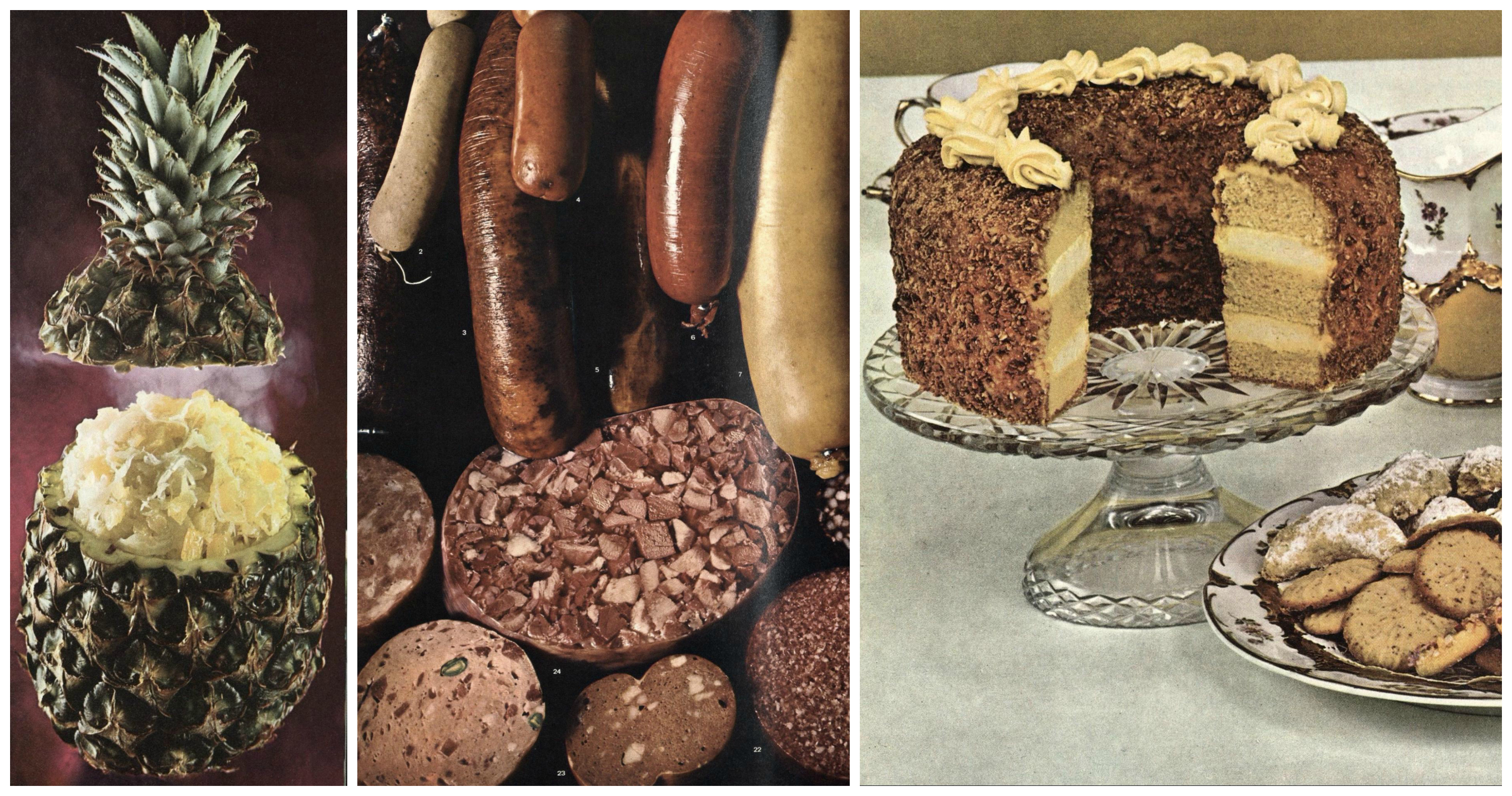 Despite the appealing pictures of meat and sauerkraut artfully served in a pineapple, a hearty German cake called a “Frankfurter Kranz” seemed like the way to go. This cake is described as a layer cake with butter-cream filling and a praline-topping. The cookbook goes on to say that this cake “is a frankly extravagant cake” and “it is a special treat served only on the most elegant occasions.”

In addition to sticking to an international theme, I also, rather unintentionally, continued with the unhealthy cooking theme. While the last recipe involved an unacceptable amount of lard, this fancy German cake requires an almost unbelievable amount of eggs. SIXTEEN EGGS. While this cake is mostly just egg, it also requires 1.5 pounds of butter, nearly 3 cups of sugar, and 2 cups of rum. Yum.

The cake batter is fairly simple – eggs, butter, sugar, flour, baking powder, and cornstarch. I’ll admit here that I added the rum to the cake at the wrong time. The instructions say to sprinkle ¾ cup of rum on the baked cake as it cools. I got excited about the rum and added it directly to the batter.

If you are a “lick-the-bowl” type of person (as I am), you may want to fight that impulse here. The batter is mostly rum added to 6 raw eggs and that is exactly what it tastes like.

I baked it for 40 minutes in an oven preheated to 325 degrees. You’ll notice that I used a regular cake pan and not the “tube cake pan” called for in the recipe. 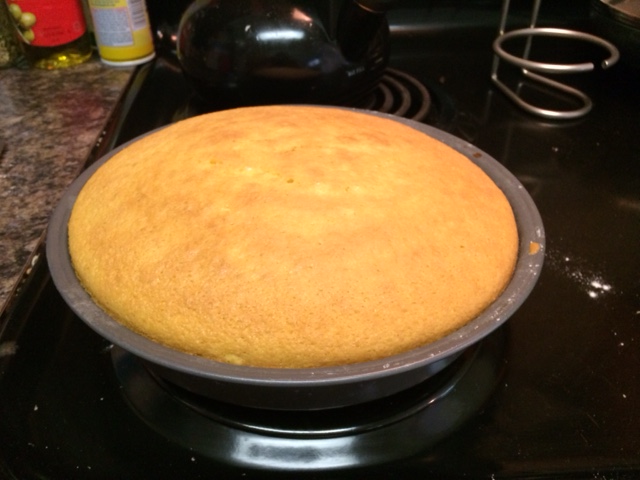 The cake came out of the oven looking quite nice. I let it cool for about an hour while I made an emergency butter buying trip. The next step was the most worrying in the recipe. I had to cut the cake into 3 layers with a sharp knife. I was genuinely surprised that I managed to do this without completely butchering the cake, cutting myself, or yelling. The 3 parts were a bit uneven, but not too shabby. 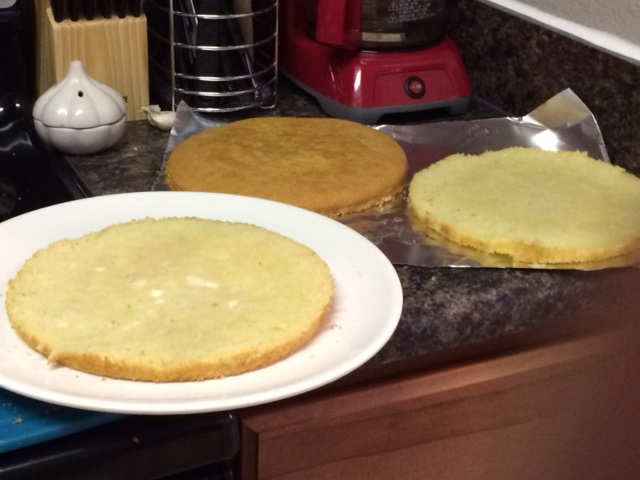 The next step was supposed to be sprinkling ¼ cup of rum over each of the cake parts. But, as you’ll remember, I accidentally added the rum to the batter. To (sort of) make up for this error, I drizzled a bit of rum on each. A little more rum, a little more fun, right?

The butter-cream frosting used a whopping 10 egg yolks along with a pound of butter and over a cup of sugar. In the first step, I boiled sugar, cream of tartar, and water to create a syrup. The recipe says to boil it to 236 degrees and to use a candy thermometer. I don’t own one of those so I just let it boil for a while and guessed. This mixture is added to the eggs and butter along with another ½ cup of rum. I used an electric mixer to beat this together for 5 minutes. The frosting then went into the refrigerator for 30 minutes to thicken up.

The frosting looks like what it is which is eggs. This part of the recipe seemed a bit suspect to me. Is the heated syrup supposed to cook the 10 raw eggs to the appropriate temperature? I guess I can buy that. No one who tested the cake reported any stomach discomfort.

The final part of the cake is a praline topping. No eggs here. This also involves making a syrup with sugar and water and bringing the mixture to 236 degrees. Again, I guessed here.
Then, I stirred in some almonds and brought the mixture to what I felt was 310 degrees. I then poured this onto a baking sheet and let it harden. Once it was hard, I crushed it into small pieces. The recipe says to use a blender or mortar and pestle to pulverize the praline. I tried to use the blender, but the nut mixture was too hard for it to chop. Instead, I improvised by putting the praline into a plastic freezer bag and beating it on my kitchen counter with a potato masher. Effective and therapeutic.

Constructing the cake was easy, but messy. You take a cake layer, smother it in frosting, and top it with the next layer. At the end, you cover all three layers with frosting and then add on the praline. The frosting did not thicken as much as it was probably supposed to. It just dripped off the cake. And not in a visually appealing way. 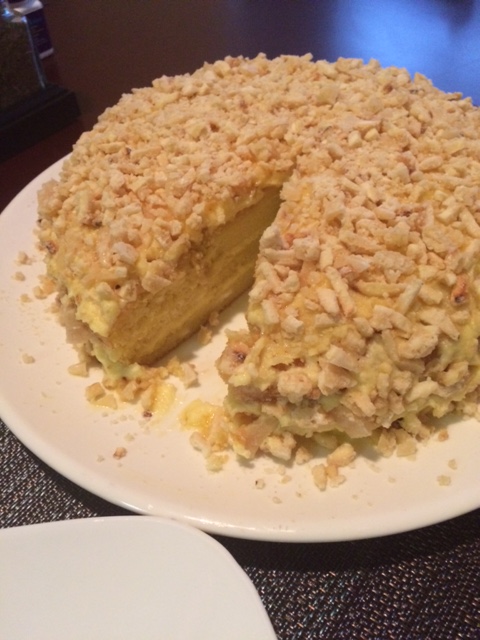 The taste is ok, but not mindblowing. I think the rum is a bit much and it just reminded me that chocolate is better. The cake is too rich for an American – half of a piece is more than enough. The praline topping really saves the cake with a nice crunch.

Would I make it again?: No. Since it is served only for the most extravagant occasions, I can’t imagine why I would need to.