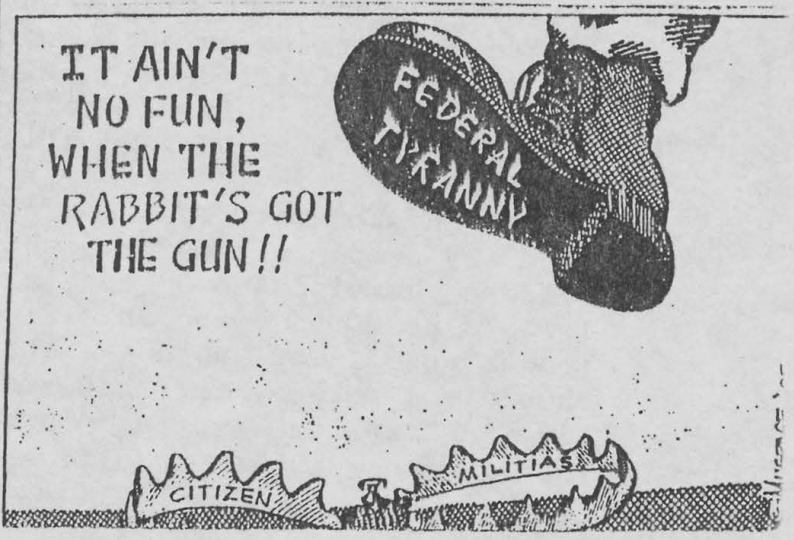 By many accounts, the riot on January 6, 2021 at the U.S. Capitol building was an unprecedented day of violent, far-right insurrection. Indeed, an attack of that magnitude on the nation’s capital has not occurred since this country’s Civil War. The events of that day drew together various far-right factions with a propensity for antidemocratic violence, including QAnon conspiracy adherents, so-called militia or patriot groups like the Oath Keepers, and the “western chauvinist” group the Proud Boys.[1] While the unfolding violence on January 6 may have been unprecedented, the “revolutionary” narratives undergirding those events are not. And the ultimate incapacity of those rioters to overturn national election results will not preclude others from trying again through other violent means.

My research uses digital and historical archives to trace the sort of conspiratorial narratives that resulted in the January 6 riot. The Rubenstein Library’s exceptional special collections have contributed to the goals of my larger dissertation project, in which I examine particular tropes in the history of firearms advocacy in the U.S. as that history is inflected by ideologies of far-right vigilantism and white supremacist subtext. As a scholar of rhetoric, I’m particularly interested in the ways social movements build and circulate narratives that establish certain senses of identity, urgency, or, in extreme cases, justifications for terroristic violence.

In the Rubenstein Library’s collections, I was primarily examining the periodicals circulated by the civilian militia movement that rose to prominence in the U.S. in the early 1990s. These materials include newsletters and propaganda that these militia groups circulated for recruitment and political antagonism. Overall, what these archival materials help illustrate is that the sort of antidemocratic violence seen on January 6 is neither a new phenomenon of far-right sedition, nor will it be the last. Though hundreds of rioters have now been criminally charged,[2] little accountability appears on the immediate horizon for the sitting members of Congress who refuse to condemn the participants or the election falsehoods that precipitated the riot.[3]

The civilian militia movement has been characterized by a deeply libertarian suspicion (and/or paranoia) of the federal government, and a stalwart dedication to the Second Amendment as a means to reclaim “liberty” for the militias’ overwhelmingly white and male members. This is despite the fact that militias were and are extrajudicial in all 50 states, and that judicial precedent on the Second Amendment does not support private militia formation.[4] The civilian militia movement originated amid a longer history of racist backlash to the incremental victories of the civil rights movement of the twentieth century, which were (and still are) framed on the political right as encroachments of federal government power on everyday American lives. Then, a series of lethal blunders by federal agencies in the early 1990s accelerated militia mobilization across the country: First, in the deadly standoff with a white separatist family at Ruby Ridge, Idaho in 1992, and second, the 51-day explosive siege of the Branch Davidian compound near Waco, Texas in 1993. This movement initially peaked in 1996,[5] but it declined amid the fallout from the 1995 bombing of the Oklahoma City federal building by white supremacist, anti-government extremists that killed 168 people and injured hundreds more.

As evidenced by archived materials of far-right groups, Ruby Ridge and Waco inspired militia mobilization for years afterward. For instance, the Missouri 51st militia was named for the length of the Waco siege. These events also inspired varying degrees of exhortative rhetoric in militia group publications, up to and including insurrectionary violence.  In a 1995 periodical for the Alabama-based Gadsden Minutemen Unorganized Militia, one writer reflected on how the movement ought to respond to government overreach, particularly incidents like Ruby Ridge and Waco. The writer concludes by emphasizing the “divine” spirit of the movement, even drawing a timeline from the American Revolution to the Oklahoma City bombing:

“As on April 18, 1775, on July 4, 1776, on April 19, 1995, we are ‘ … endowed by our Creator … ’ Not endowed by government. I, we are free, independent and sovereign, with full authority over our lives, our bodies,  and our property. We are rightly answerable to outside authority only for direct infringement of the rights of others. Otherwise only divine authority will obtain. It is our duty, laid on us by God and the generations, to defend our, our children’s, and our neighbors’ liberty. In extremis, to kill; if necessary to die. We, I, individuals, each alone, are individually responsible.”

As this writer notes, this is an example in extremis, but its bald exhortations resonate with the broader rhetorical strategies of these civilian militias then and now. Other groups like the Missouri 51st militia decried the horrendous violence in Oklahoma City, while asserting that their mission was not to overthrow the federal government but instead to compel the government to “return” to a nostalgic constitutional past. Still other groups like the influential Militia of Montana circulated “false flag” conspiracies about the bombing, claiming it to be yet another federal ruse to dismantle their movement.  After the failed insurrection on January 6, 2021, some on the far-right recapitulated this storyline by claiming that the Capitol riot was itself yet another “false flag.” Still others, including members of Congress, have extended that “revolutionary” timeline to include January 6, 2021.[6]

In all, my research is concerned with critically contextualizing the prominence of heavily-armed vigilante groups in the American political system, particularly their violent vision of enforcing governmental accountability. To be sure, the government and our elected leaders must be held to account for their travesties and abject failures. However, civilian militias and their allies rely on armed intimidation and blatantly antidemocratic terrorism, methods that must be situated in the longer history of racist exclusion and silencing that paints a narrow view of just who “we the people” are.[7] This is why archives like the Rubenstein Library’s collections are particularly valuable for reminding us how we got to where we are now, including the far-right normalization of extremist words and deeds.