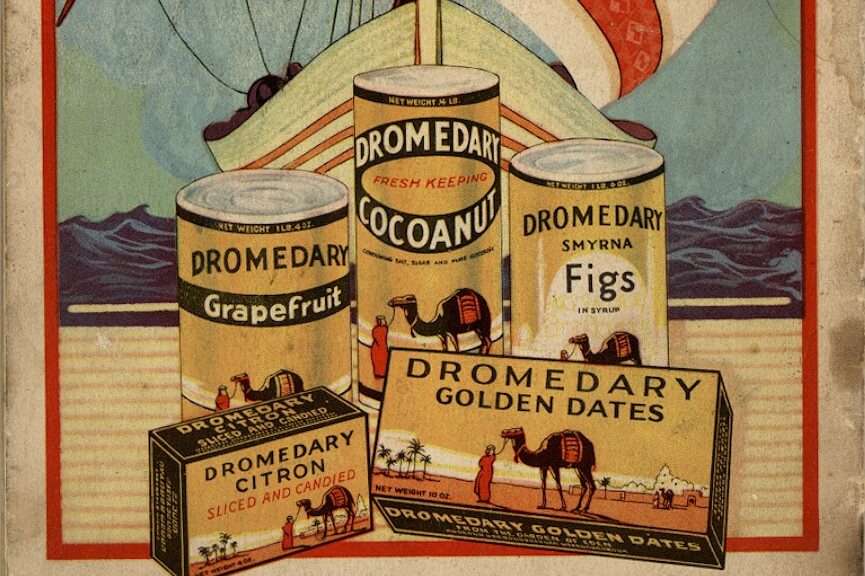 I came across this 1925 cookbook – Foods from Sunny Lands – and it struck a chord: I had just made a date and nut bar to keep me eating healthy snacks. It seems we may not be the only household requiring gummy bears to fill some sort of stay-at-home-related need for sugary, fruity, chewy wads (out of stock on Amazon!). Dates could be a good alternative!

As may be expected from an American cookbook from 1925, this book depicts people of color one-dimensionally and seems to romanticize and exoticize Middle Eastern culture and foods.

The authors also make many grandiose claims about health and diet. There are a couple statements that seem imminently modern, though! This from page 12: “If we were to reduce our quota of white bread, cane sugar, candy and often too generous meat ration… substituting more green vegetables and sun-ripened fruits… we should pay the doctor and dentist a great deal less.” Same story 100 years later! On to the recipes! I tried the three below thinking I’d only have to “cut small” pieces of dates one time. I also felt the need for muffins and two types of cookies – don’t ask me why. For the muffins, I opted to not use 4 teaspoons of baking powder. I bake muffins often and none of my recipes call for anywhere near this amount. Maybe there was something different about baking powder 100 years ago? I went with 2 teaspoons. Also, I added one mashed banana for some additional sweetness (2 tablespoons of sugar isn’t very much!). These turned out fine, a little doughy, not what I would call “rich,” but fine. The crisps turned out tasty but definitely not “crisp.” I even tried letting a few get very dark to see if they’d crisp up. They didn’t.

The dough was super hard to work with, too. I tried chilling it for 20 minutes to see if it’d be less wet but that didn’t really help. I added a ton of flour to keep it from sticking during the rolling out but I wasn’t able to get it very thin. Maybe ¼ inch. They also needed to cook about twice as long as the recipe said. Maybe because they were too thick? Oh and also, it’s hard to cut out rounds when there are chunks of dates in the cookies! But I might recommend these. Very sweet and a nice soft texture. And the meringues… these turned out good! I used ½ cup chopped dates as I didn’t know what “½ package” would’ve been. Also, I’ve made meringues a couple times and had usually left them to cool in the oven so I did that. I took them out after about 20-30 minutes in the turned-off oven. A few things I learned as a result of this cookbook:

5 thoughts on “So Many Dates! : Rubenstein Library Test Kitchen”