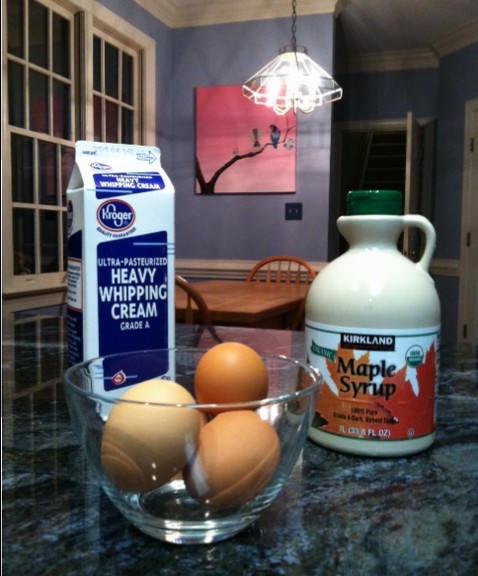 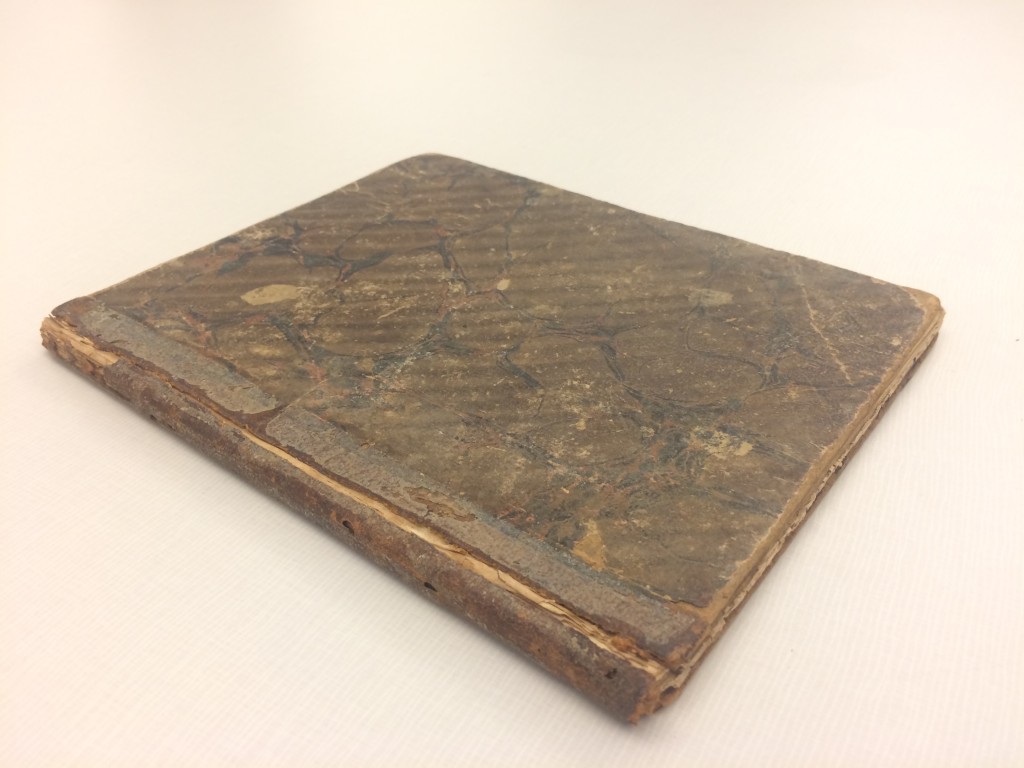 A manuscript (i.e. handwritten) cookbook can tell us a great deal about its creator. What foods were available to her? How would her family have celebrated holidays and birthdays? Was she an elite woman with a cook who could prepare elaborate dishes, or a farm wife who had to prepare simple, hearty fare and preserve her harvest to feed her family? Do the recipes reflect a particular ethnic or religious background or geographical location? As is the case today, routine meals do not require a recipe. It is the special occasion recipes, especially those that require careful measurements to work properly, that are recorded for future reference.

We know, based on the ingredients, that Rubenstein Library’s New England Manuscript Recipe Book, [ca. 1860]-[1900] comes from the northeastern United States. It is no surprise that the little book includes a page of maple recipes, since maple is such a distinctive regional product. 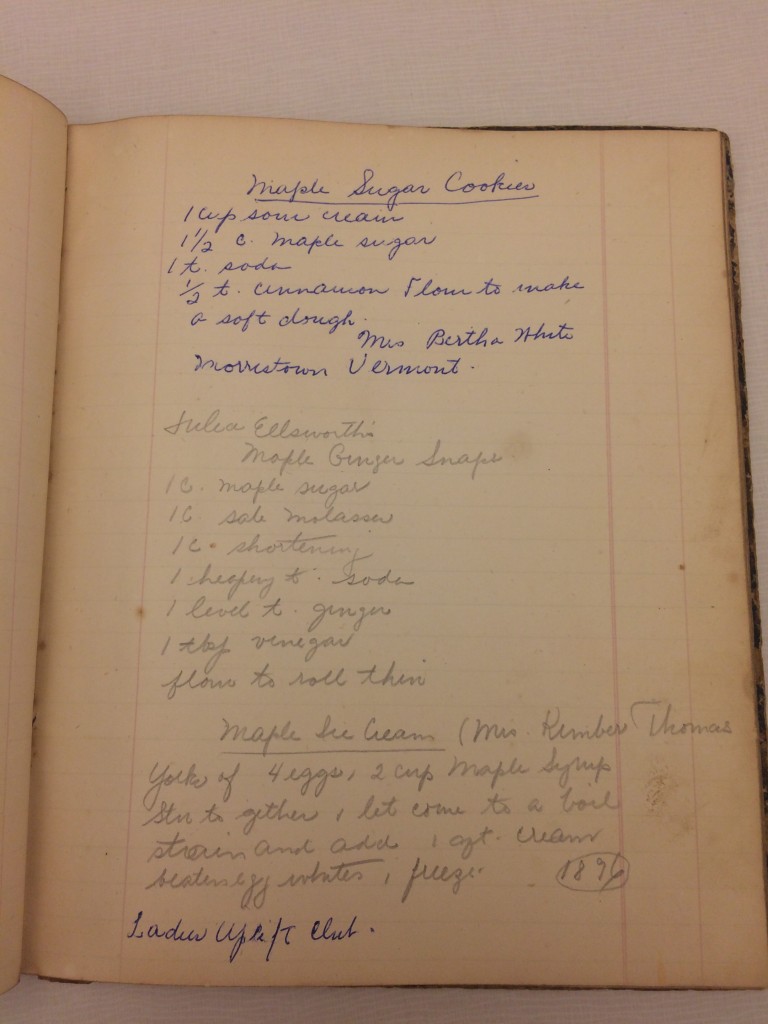 I was intrigued by the Maple Ice Cream Recipe, in part because I am the proud owner of a fancy electric ice cream maker, so much easier than the hand-crank models that would have been available when the recipe was recorded. There is also the nostalgia of tasting maple:  Santa always left a maple sugar woman in my Christmas stocking.

This is an extremely simple recipe, with just three ingredients: eggs, maple syrup, and cream: 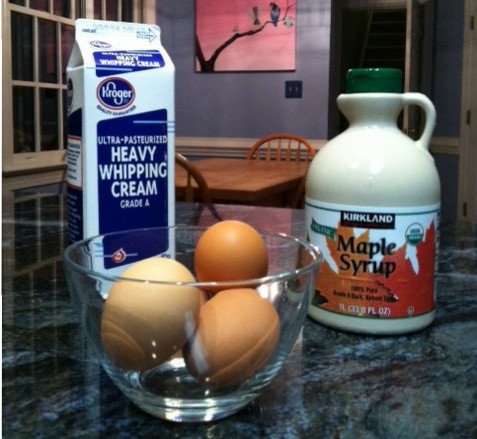 I made a couple of changes. Given concerns about salmonella, I was not comfortable leaving the egg whites uncooked. I was also worried that mixing the eggs and syrup and boiling the mixture would result in curdled eggs. Instead, I boiled the syrup for about ten minutes to reduce it slightly, thereby intensifying the flavor. In a separate bowl, I beat the whole eggs. Then I slowly dribbled in about a cup of hot syrup, whisking the egg mixture constantly before whisking the egg mixture into the pot of hot syrup. Then I brought the mixture to 170 degrees, turned off the heat, and stirred in the cream. 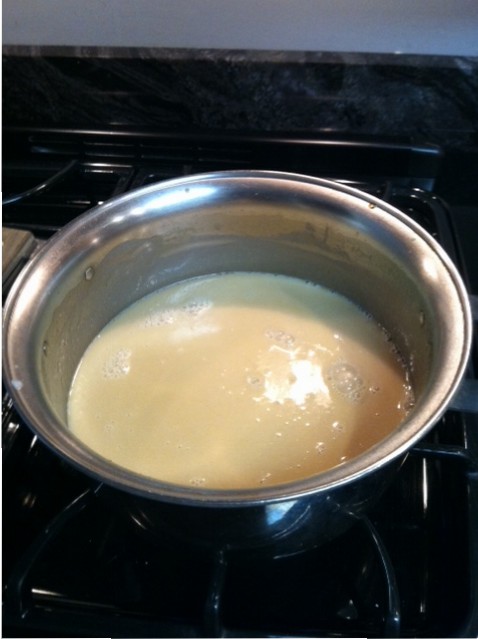 Finally, I strained the mixture through a sieve to remove any solids and chilled it overnight before freezing, emptying into a plastic container, and leaving it in the freezer for a few hours to firm it up. The result: an absolutely luscious and elegant frozen dessert. 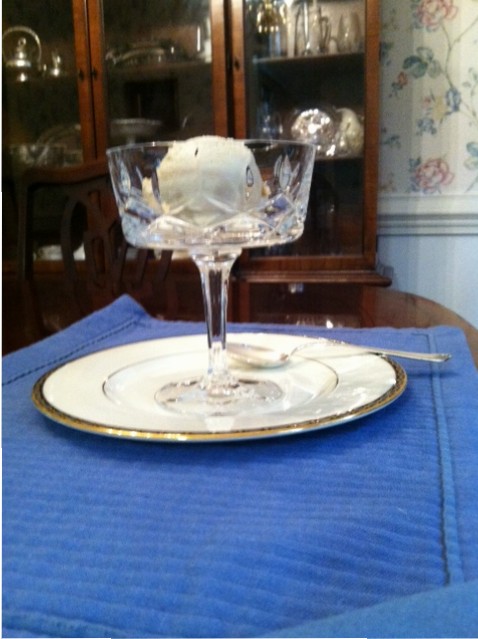 How did it taste? I brought in the whole container to share with my Rubenstein colleagues and it got rave reviews. It is very rich (note the quart of heavy cream!), but delicious.

Intrigued by the annotations (1896, Mrs. Kimber Thomas, Ladies Uplift Club), I did some searching and found a Morrisville, Vermont Uplift Club in The Register of Women’s Clubs (1922). I wondered whether Mrs. Kimber Thomas was given the recipe for Maple Ice Cream in 1896 and contributed it to an Uplift Club fund-raising cookbook and was thrilled to find a reference to this 53-page cookbook: Tried and Proven Recipes from Many Households. Morristown, Vt. : Ladies of the Uplift Club. The one known copy is in the Janice Bluestein Longone Culinary Archive at the University of Michigan in Ann Arbor. Staff have dated it to 1921, based on advertisements printed in the cookbook. As I write this, I am waiting for scans that I hope will confirm my hunches about the Maple Ice Cream recipe’s provenance. The tradition of noting the source and date of a recipe is a lovely way to link culinary creations to a vast network of friends, family, community, and history. The additional information would also allow us to more precisely identify the origins of this precious little cookbook.

Stinking for Skinking
New Acquisitions - From the Library of Two Presidents
Happy Thanksgiving from the Rubenstein!