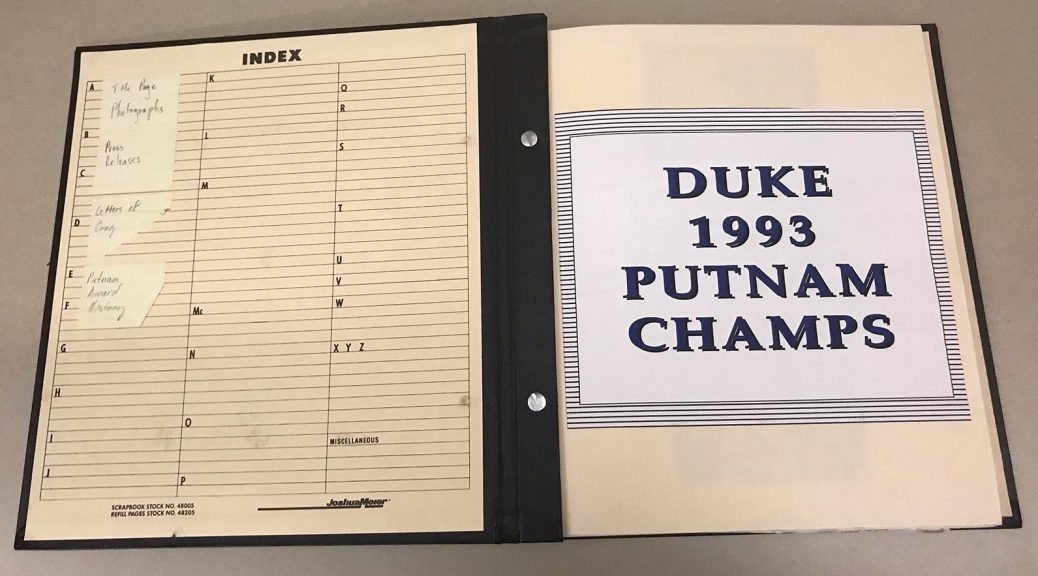 The scrapbook describes Duke undergraduates’ participation in the William Lowell Putnam Mathematics Competition. The Putnam, which began in 1938 as a competition between college and university mathematics departments, is now the premier mathematics competition for undergraduate students. In fact, it has been repeatedly described as the “NCAA tournament” of the math world. Taking place each December, undergraduates attempt to solve challenging mathematical problems over a six hour period. This is both an individual and team competition, with prizes awarded to students with the highest scores as well as to the five institutions with the highest rankings.

This scrapbook contains press releases, correspondence, programs, and photographs related to the Department of Mathematics’ participation in the Putnam Competition. In 1993, Duke University won its first Putnam, with the team of senior Jeffrey Vanderkam, junior Craig Gentry, and freshman Andrew Dittmer taking first place. Harvard University had taken the top honors for the previous eight years. While the scrapbook focuses primarily on Duke’s first victory in 1993, it also includes some material from later years, including a photograph of Duke’s second winning team in 1996, and a copy of a Board of Trustees announcement honoring five mathematics students in 2000, when the Duke University team again took first place in the Putnam.

Duke University students compete in both athletics and academics. Now the victories of these undergraduates will be preserved and shared with the larger campus community as part of the University Archives.

The William Lowell Putnam Competition scrapbook was created by Dr. David Kraines, Associate Professor Emeritus of Mathematics, who leads many of the Putnam competition teams. It was transferred to the University Archives by the Department of Mathematics in April 2019.

One thought on “Add it Up: Duke and the Putnam Mathematics Competition”