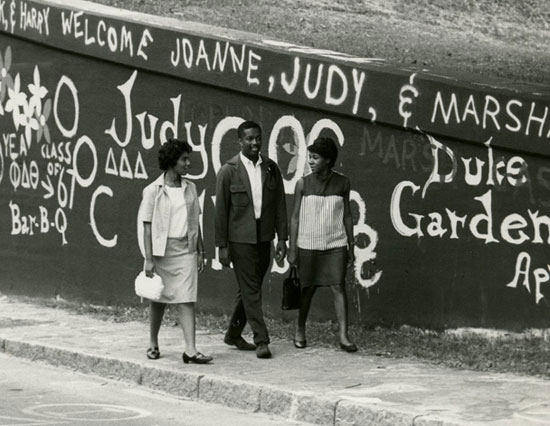 Nathaniel White, Jr was among the first five black students to attend Duke University in 1963. He was not, however, the first person in his family to attend college. His father, Nathaniel White, Sr., had attended Hampton Institute prior to founding his own printing business in Durham. In a newly-digitized interview, White, Sr. discusses his life, his memories, and his experience as a black man living in Virginia and North Carolina during the 20th century.

White’s interview is part of the Behind the Veil digital project, which has just added over 300 new interviews with North Carolinians, including many from Durham. The interviews capture details of what life was like in the Jim Crow South for African Americans. In White’s interview, he shares the story of his childhood, the black business community in Durham, and the influence of scouting on his life. Of particular interest to local researchers, he describes individuals and businesses in the Durham black community in the mid-20th century, providing deep insight into Durham’s history.

He also briefly discusses his son’s pioneering role at Duke. He mentions that White, Jr., had considered Hampton Institute himself, but then had the opportunity to attend Duke. His father candidly remarks in the interview, “There’s one thing about a situation like that, it’s more like the real world than some other places that you might go and everything seems like it’s alright but it’s not training you for what you’re going to meet when you get outside. It’s a real struggle out there. The sooner you learn that, the better off you might be. . . . In other words, every day he had what it’s like to be an African American citizen in this country. So he didn’t have to learn that after he graduated. He learned it every day at Duke.”

Learn more about the fascinating Behind the Veil project on Bitstreams, the blog of the digital collections department of Duke University Libraries.

One thought on “An Interview About a Duke University Pioneer”