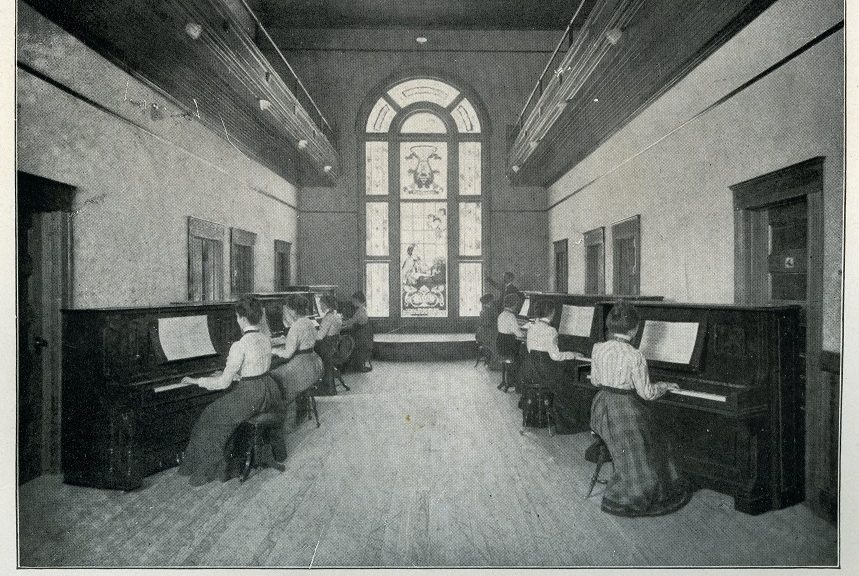 There are many music-related collections in the Rubenstein Library, but the Gilmore Ward Bryant papers are special to the history of Durham, North Carolina.  This small collection of diaries, photographs, school records, and sheet music documents a time when turn-of-the-century citizens held cultural aspirations that included unleashing the terpsichorean muse on Durham—hoping perhaps that arpeggios and arias would temper the roughness of the tobacco town (population 18,241 in 1910).

After a successful musical career in New England and Virginia, he was reportedly lured to the Southern upstart town of Durham by the Duke family, who financed the design and construction for what was to become the Southern Conservatory of Music.  Finished in 1898, the grand Italianate-style building stood on the corner of Main and Duke Street, across from the Liggett Myers Building, on land that today belongs to the Brightleaf Square parking lot.

Here is a view of the Conservatory.  This is what you would have seen if you stood at Toreros Mexican restaurant and looked across the street:

Its auditorium, practice rooms, and parlors were classically grand in scale—the reverberations must have been amazing, to say the least:

“G.W.” Bryant served as Director of the Conservatory, and along with his partner and wife, Mattie Emily Bullard Bryant, the head of the Voice Department (his daughter-in-law also taught piano), kept the undoubtedly expensive venture thriving for many decades.  The school was a huge success, hosting large concerts, alumni dinners, and recitals several times a year.

Bryant was also a composer, penning scores as early as 1895 and continuing into the 1930s.  He wrote and published many pieces, including a “Tiny Waltz” and another piece entitled “Topsy Turvy.”

Eventually, perhaps due to a familiar pattern of rising downtown rents, the Bryants laid the cornerstone for a new Conservatory on South Alston Avenue, then open countryside, in summer 1923, and the old Conservatory was demolished in 1924.  Bryant’s wife writes in her 1923 diary on December 31: “Went up & thru the old Conservatory— was terrible—nearly dropped to pieces.”

Today Durham hosts several music schools, but the era of grand edifices and classical conservatory training has yet to return.  In the meantime, we applaud the Bryants’ vision for and dedication to their adopted Southern hometown.  Luckily, some of the Conservatory’s records and the Bryant family’s personal papers and photographs have been preserved for researchers at the Durham County Library and the David M. Rubenstein Rare Book & Manuscripts Library.  You can see the inventory for the Rubenstein collection here:

(Thanks to the Open Durham and Durham County Library websites for background information.)