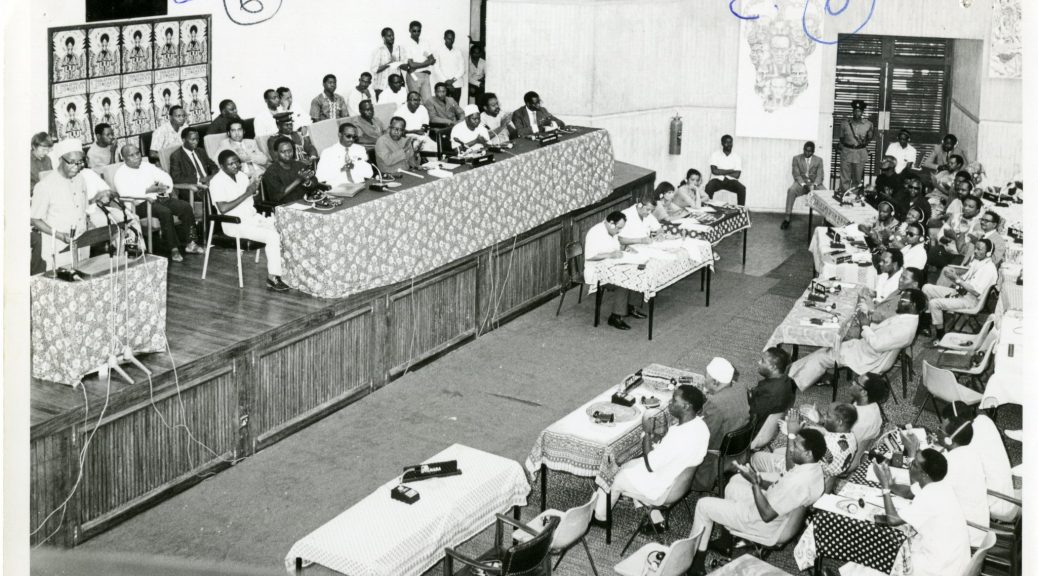 This past year the John Hope Franklin Research Center has added to its collections materials that document significant public gatherings of black intellectuals during the 20th century.  The first is a publication authored by seminal black scholar W.E.B.DuBois, The Amenia Conference, an Historic Negro Gathering. Published in 1925, DuBois wrote his reflections of a notable meeting held in 1916 in Amenia, NY that was called by the fledgling NAACP, designed to bring black intellectuals who were working to solve, what DuBois referred to in his Souls’ of Black Folk (1910), as the “problem of the color-line.” With close to 60 attendees, this small publication is one of the few, if not only, documents that provides descriptions of the meeting as DuBois noted no record was kept of the conversations. Held one year after the death of Booker T. Washington, in many ways the dean of black leadership at the turn of the 20th century, DuBois stated that “…the Amenia Conference was a symbol. It not only the end of the old things and the old thoughts and the old ways of attacking the race problem, but in addition to this it was the beginning of the new things.”

Later in the century, after the wave of black activism in the form of the Civil Rights Movement in the US and waves of independence movements in Africa and the Caribbean during the 1960s, the 6th Pan-African Congress (6PAC) was held in Dar es Salaam, Tanzania in 1974. The Courtland Cox Papers document the planning and programs held during the week long meeting that was the first Pan-African Congress held in Africa. Cox himself left Howard University in the early 1960’s to a join the Student Nonviolent Coordinating Committee (SNCC) and organize against disenfranchisement and poverty in America’s Deep South. Coming out of SNCC, he and a number of SNCC activists became involved in organizing around black consciousness and black solidarity on the global level.

Cox spent time in Tanzania in the early 1970’s and served as secretary-general for the 6th Pan-African Congress, a conference whose history dated back to 1900, although it was the first held after World War II. Over the course of the week in Dar es Salaam, sessions were held to discuss everything from economic empowerment in Africa, environmental issues in black communities, and the meaning of black solidarity around the world.

Both collections are open and available to researchers in the Rubenstein Library.