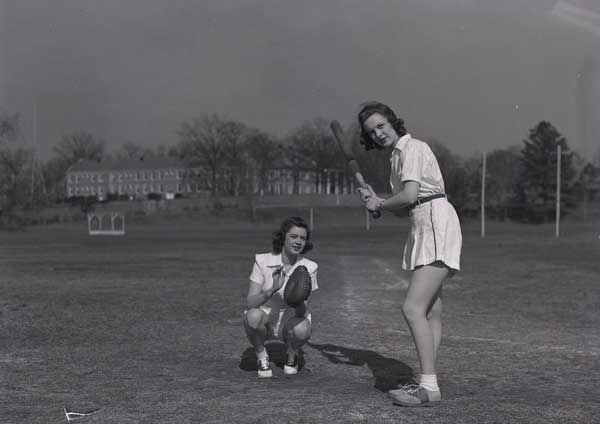 The title of this blog post comes from one of the taglines for the 1992 film A League of Their Own, a fictionalized account of the formation of the All-American Girls Professional Baseball League.

I’m currently working to inventory approximately 28,000 acetate negatives of Duke athletics from circa 1928-1982 and recently came across a few images of women playing baseball from as early as 1934 to as late as 1941.

In the decades before Title IX, Duke women participated in sports activities organized by the Women’s Athletic Association.  The W.A.A. formed in 1929 as an “outlet for the athletic urge than the physical education classes were able to offer” and to provide a “program of sports activity for women, similar to that afforded to the men by the intramural athletic program.”   The W.A.A.’s purpose was to “stimulate interest in athletics, to provide a chance for those interested in sports to develop more skill, and to give the women opportunities for fellowship and recreation.”

In addition to baseball (not softball), women competed in tennis, golf, track & field, equestrian events, field hockey, soccer, fencing, swimming, basketball, and archery. The W.A.A. also sponsored several events and activities, including dances, weekend parties, hikes, and open houses in the gym.  It also used a point system to determine which 10 seniors received a blue “D.”  The 7 seniors who accrued the highest number of points received white sweaters with the blue “D” attached.

Scanning the History of Medicine: Manikin Style
Meet our Interns
Divine Works: Expressions of Faith in Two Religious Communities as Seen in the Photographs of Kristi...

One thought on “A Woman’s Place is on Home, First, Second, and Third”