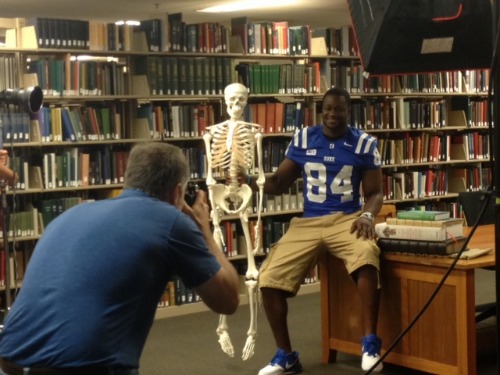 As Curator for the History of Medicine Collections, I never thought I’d type the words “Vesalius and Football” together. But last week I had the opportunity to showcase De Humani Corporis Fabrica (1543), Andreas Vesalius’s landmark atlas of the human body, in a Sports Illustrated photo shoot featuring Duke football player Kenny Anunike. I wonder how many of my colleagues working in historical medical collections have had collection material featured in SI?!?

Kenny, a senior biological anthropology and anatomy major and Duke defensive end, will be featured in the upcoming college football preview issue of SI in a story highlighting academically-renowned universities that experienced a resurgence in football last year, such as Duke, Stanford, and Northwestern.

As I pulled out our eighteenth-century dissection kit, Kenny talked about some of the dissections on human legs he performed in class. While the photoshoot entailed books rather than instruments, the illustrations in these phenomenal texts detail dissection and other aspects of anatomy quite vividly. The book that Kenny is holding was actually published in 2005, reprints from the original work of J.M. Bourgery’s Atlas of Human Anatomy and Surgery. The History of Medicine retains the nineteenth-century work by Bourgery that contains these highly detailed, stunning, and graphic illustrations. And for those of you unfamiliar with Vesalius’s work, I recommend the National Library of Medicine’s Turning the Pages site, in which they have digitized portions of De Humani Corporis Fabrica. We are so fortunate to retain this amazing book from the sixteenth century in our Collections.

And the skeleton? Unfortunately not part of the History of Medicine Collections. It belongs to the Athletics Department and is used in their health and fitness training of student athletes. But we like to think of it as a symbol of Kenny’s “bonified” academic and athletic success.

2 thoughts on “Vesalius and Football”