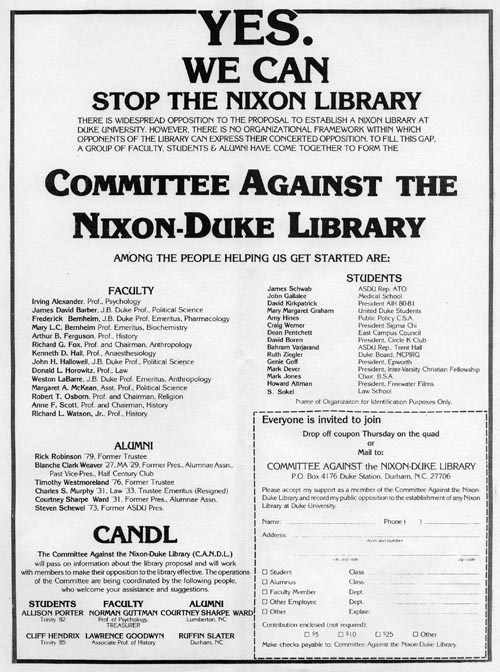 Currently, there is a debate among faculty at the University of Chicago regarding whether or not President Barack Obama’s presidential library should be erected on campus.  Duke University experienced a similar debate in 1981, in what is today referred to as the Nixon Library Controversy.

For a little background, we turn to the Committee Against the Nixon –Duke Library (CANDL) Records finding aid:

In late July 1981, Terry Sanford initiated negotiations with former president Richard Nixon (Duke Law 1937) to locate the Nixon presidential library on the campus of his alma mater. When this information was revealed to faculty members during the week of August 10, 1981, many opposed the proposition as well as Sanford’s failure to consult the faculty prior to initiating negotiations.

Many who opposed the library had moral objections to memorializing a president whose behavior in office was reproachable, and they feared a negative effect on the university’s reputation. Other concerns included the effects of greatly increased tourist traffic on campus and the aesthetic nature of the large proposed structure. However, supporters of erecting the Nixon Library on campus argued that the scholarly and academic benefits of locating the vast Nixon Presidential Materials collection on campus should and would outweigh any moral concerns. These supporters tended to denounce the actions of vocal dissenters as divisive and/or arrogant.

Meetings of the Academic Council and Board of Trustees during September and October 1981 were dominated by this debate, and a group of faculty formed the Committee Against the Nixon-Duke Library (CANDL) to organize the efforts of faculty, students, alumni, and others opposed to the proposed library. Although the Academic Council voted not to recommend further negotiations with Nixon in a 35-34 decision September 3, 1981, the Board of Trustees later voted 9-2 to proceed. By April 1982 negotiations had stalled, and a year later Nixon’s representatives announced that a site at Chapman College in San Clemente, California, had been chosen for the Richard M. Nixon Presidential Library.

Duke University Archives houses several collections related to the Controversy.  Our most recent acquisition is the Peter Wood Papers on the Nixon Library Controversy.  Wood was Professor of History during this time and was a member of CANDL.  Included in his papers is the following flyer:

For more information about the Nixon Library Controversy, we invite you to consult resources within Duke University Archives, including the following collections: