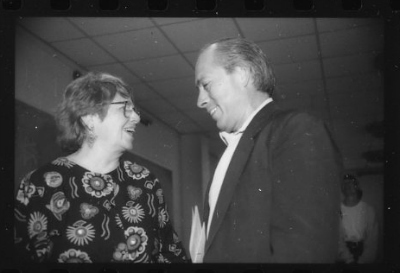 Joan Papert Preiss, tireless activist and organizer for farm workers’ rights, passed away in Durham on June 1, 2012. Preiss helped to found and chaired the Triangle Friends of the United Farm Workers (TFUFW) from 1973 into the 2000s. One of the most active groups in the Eastern U.S. associated with the United Farm Workers of America, TFUFW helped to bring Cesar Chavez, Baldemar Velásquez, and Dolores Huerta to speak at Duke and organized regional boycotts of products to improve conditions for migrant farm workers. Preiss also served on the board of the National Farm Worker Ministry, which has published a memorial to her, and was involved with the work of Student Action with Farmworkers since its foundation at Duke in 1992.

Preiss’s legacy can be explored in her papers at the Rubenstein Library. The papers contain extensive documentation of  boycotts coordinated by TFUFW with other groups, including the creative and colorful picket signs, leaflets, and other materials (such as the “pickle tiara”) for which Preiss became known in Durham and beyond.