One project we’ve been working on recently in the Digital Projects Department is a revamped Library Exhibits website that will launch in concert with the opening of the newly renovated Rubenstein Library in August. The interface is going to focus on highlighting the exhibit spaces, items, and related events. Here’s a mockup of where we hope to be shortly: 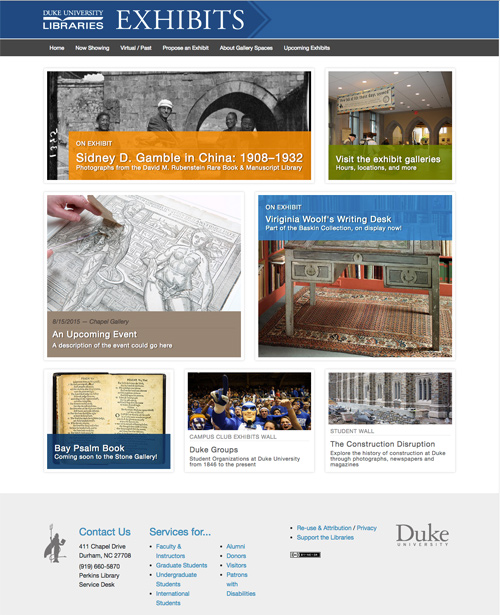 On a somewhat related note, I recently traveled to Italy and was able to spend an afternoon at the Venice Biennale, which is an international contemporary art show that takes place every other year. Participating artists install their work across nearly 90 pavilions and there’s also a central gallery space for countries that don’t have their own buildings. It’s really an impressive amount of work to wander through in a single day and I wasn’t able to see everything, but many of the works I did see was amazing. Three exhibits in particular were striking to me.

The first I’ll highlight is the work of Joana Vasconcelos, titled Il Giardino dell’Eden, which was housed in a silver tent of a building from one of the event sponsors, Swatch (the watch company). As I entered I was immediately met with a dark and cool space, which was fantastic on this particularly hot and humid day. The room was filled with an installation of glowing fiber optic flowers that pulsated with different patterns of color. It was beautiful and super engaging. I spent a long time wandering through the pathway trying to take it all in. 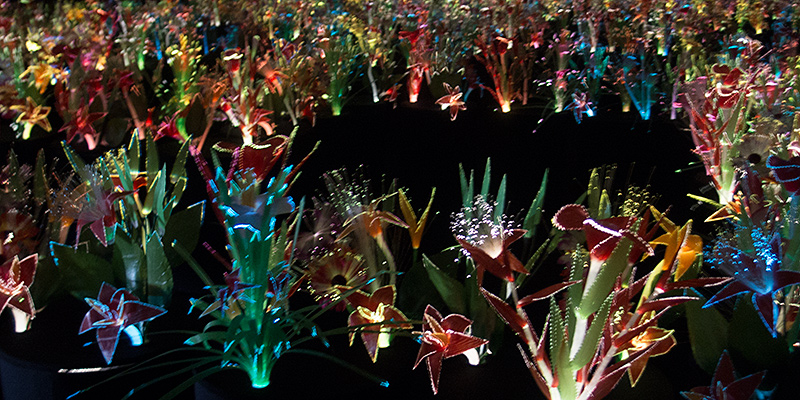 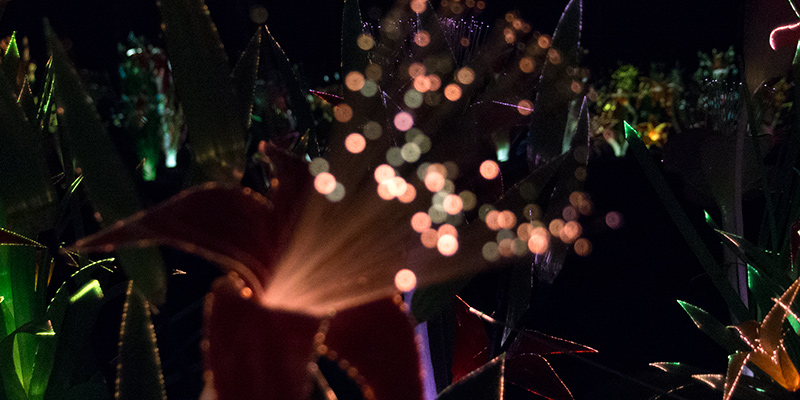 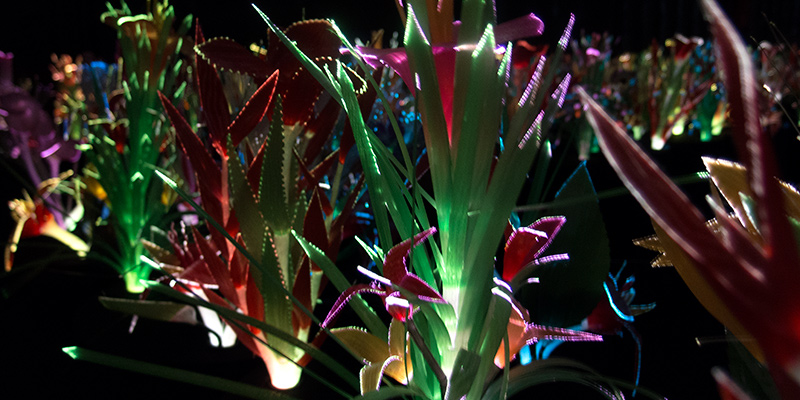 Another engrossing installation was housed in the French Pavilion; Revolutions by Celeste Boursier-Mougenot. I walked into a large white room where a tree with a large exposed rootball was sitting off to the side. There were deep meditative tones being projected from somewhere close by. I noticed people were lounging in the wings of the space, so I wandered over to check it out for myself. What looked like a wooden bleacher of sorts actually turned out to be made of some sort of painted foam. So as I stumbled and laughed when I tried to first walk on it, like many others who came into the space later, I plopped down to soak in the exhibit. I noticed the deep tones were subtly rhythmic and they definitely gave off a meditative vibe, so it was nice to relax a bit after a long day of walking. But then I noticed the large tree was not where it had been when I first entered the room. It was moving, but very slowly. Utterly interesting. It almost seemed to levitate. I’d really like to know how it worked (there were also two more trees outside the pavilion that moved in the same way). Overall it was a fantastic experience.

My favorite installation was in the Japanese Pavilion; The Key in the Hand by Chiharu Shiota. The space was filled with an almost incomprehensible number of keys dangling from entangled red yarn suspended from the ceiling of the room. There were also a few small boats positioned around the space. My first instinct was that I was standing underneath a red sea. It’s really hard to describe just how much ‘red’ there actually is in the space. The intricacy of the threads and the uniqueness of almost every key I looked at was simply mind blowing. I think my favorite part of the exhibit was nestled in a corner of the room where an iPad sat looping a time compressed video of the installation of the work. It was uniquely satisfying to watch it play out and come together over and over. I’m not sure how to tap into that experience for exhibits in the library, but it’s something we can certainly aim for! 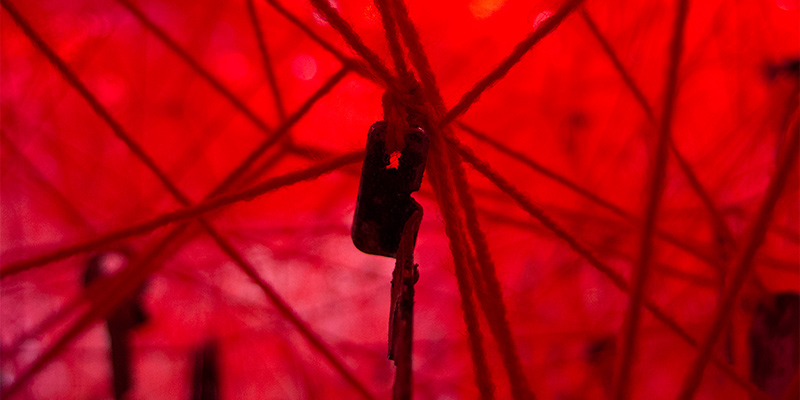 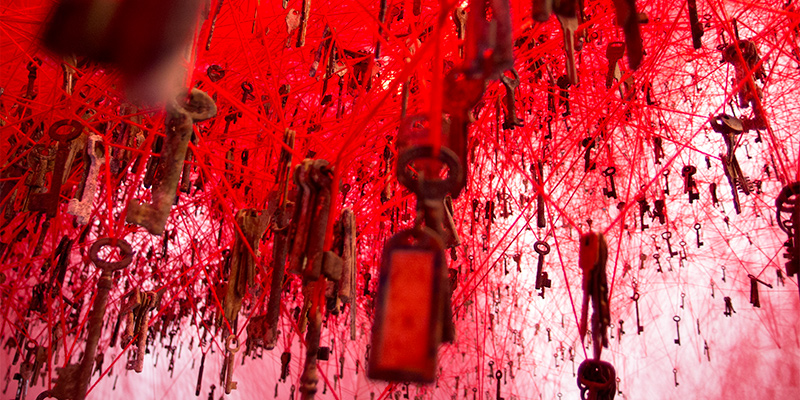 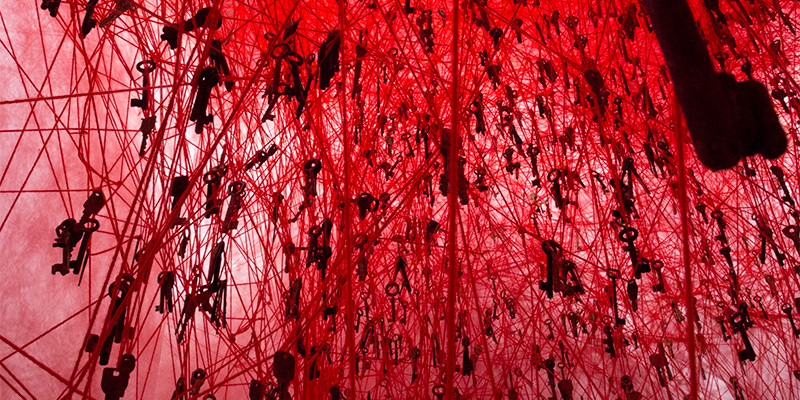 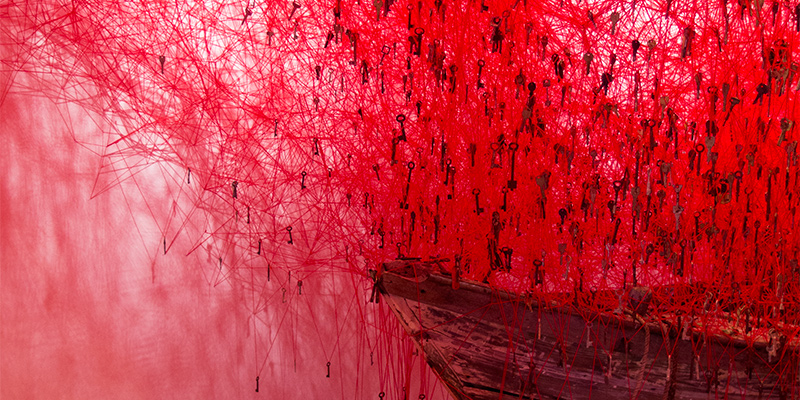