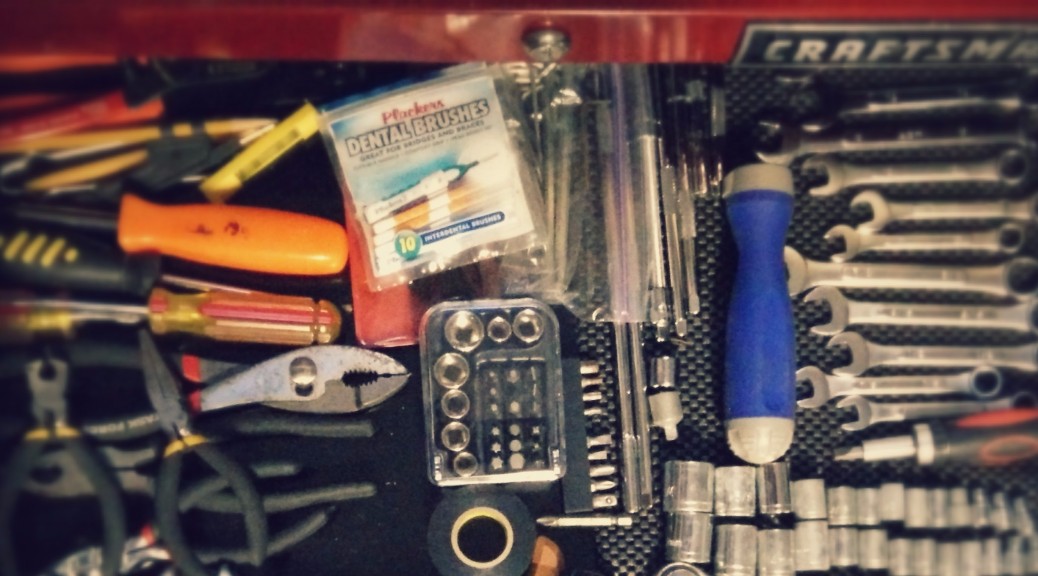 I recently, while perhaps inadvisably, updated my workstation to the latest version of OS X (Yosemite) and in doing so ended up needing to rebuild my setup from scratch. As such, I’ve been taking stock of the applications and tools that I use on a daily basis for my work and thought it might be interesting to share them. Keep in mind that most of the tools I use are mac-centric, but there are almost always alternatives for those that aren’t cross-platform compatible.

Our department uses Jabber for Instant Messaging. The client of choice for OS X is Adium. It works great — it’s light weight, the interface is intelligible, custom statuses are easy to set, and the notifications are readily apparent without being annoying.

My email and calendaring client of choice is Microsoft Outlook. I’m using version 15.9, which is functionally much more similar to Outlook Web Access (OWA) than the previous version (Outlook 2011). It seems to startup much more quickly and it’s notifications are somehow less annoying, even though they are very similar. Perhaps it’s just the change in color scheme. I had some difficulty initially with setting up shared mailboxes, but I eventually got that to work. [go to Tools > Accounts, add a new account using the shared email address, set access type to username and password, and then use your normal login info. The account will then show up under your main mailbox, and you can customize how it’s displayed, etc.]

Another group that I work with in the library has been testing out Slack, which apparently is quite popular within development teams at lots of cool companies. It seems to me to be a mashup of Google Wave, Newsgroups, and Twitter. Its seems neat, but I worry it might just be another thing to keep up with. Maybe we can eventually use it to replace something else wholesale.

We mostly use basecamp for shared planning on projects. I think it’s a great tool, but the UI is starting to feel dated — especially the skeuomorphic text documents. We’ve played around a bit with some other tools (Jira, Trello, Asana, etc) but basecamp has yet to be displaced.

We also now have access to enterprise-level Box accounts at Duke. We use Box to store project files and assets that don’t make sense to store in something like basecamp or send via email. I think their web interface is great and I also use Box Sync to regularly back up all of my project files. It has built-in versioning which has helped me on a number of occasions with accessing older version of things. I’d been a dropbox user for more than five years, but I really prefer Box now. We also make heavy use of Google Drive. I think everything about it is great.

Another tool we use a lot is Git. We’ve got a library Github account and we also use a Duke-specific private instance of Gitorious. I much prefer Github, fwiw. I’m still learning the best way to use git workflows, but compared to other version management approaches from back in the day (SVN, Mercurial) Git is amazing IMHO.

I almost always start any design work with sketching things out. I tend to grab sheets of 11×17 paper and fold them in half and make little mini booklets. I guess I’m just too cheap to buy real moleskins (or even better, fieldnotes). But yeah, sketching is really important. After that, I tend jump right in to do as much design work in the browser as is possible. However Photoshop, Illustrator, and sometimes Indesign, are still indispensable. Rarely a day goes by that I don’t have at least one of them open.

With regards to media production, I’m a big fan of Sony’s software products. I find that Vegas is both the most flexible NLE platform out there and also the most easy to use. For smaller quicker audio-only tasks, I might fire up Audacity. Handbrake is really handy for quickly transcoding things. And I’ll also give a shout out to Davinci Resolve, which is now free and seems incredibly powerful, but I’ve not had much time to explore it yet.

My code editor of choice right now is Atom — note that it’s mac only. When I work on a windows box, I tend to use notepad++. I’ve also played around a bit with more robust IDEs, like Eclipse and Aptana, but for most of the work I do a simple code editor is plenty.

For local development, I’m a big fan of MAMP. It’s really easy to setup and works great. I’ve also started spinning up dedicated local VMs using Oracle’s Virtual Box. I like the idea of having a separate dedicated environment for a given project that can be moved around from one machine to another. I’m sure there are other better ways to do that though.

I also want to quickly list some Chome browser plugins that I use for dev work: ColorPick Eyedropper, Window Resizer, LiveReload (thanks Cory!), WhatFont, and for fun, Google Art Project.

I also make use of Virtual Box for doing browser testing. I’ve got several different versions of Windows setup so I can test for all flavors of Internet Explorer along with older incarnations of Firefox, Chrome, and Opera. I’ve yet to find a good way to test for older versions of Safari, aside from using something static like browsershots.

With regards to mobile devices, I think testing on as many real-world variations as possible is ideal. But for quick and dirty tests, I make use of the iOS Simulator and the Android SDK emulator. the iOS simulator comes setup with several different hardware configs while you have to set these up manually with the Android suite. In any case, both tools provide a great way to quickly see how a given project will function across many different mobile devices.

Hopefully this list will be helpful to someone out in the world. I’m also interested in learning about what other developers keep in their tool chest.