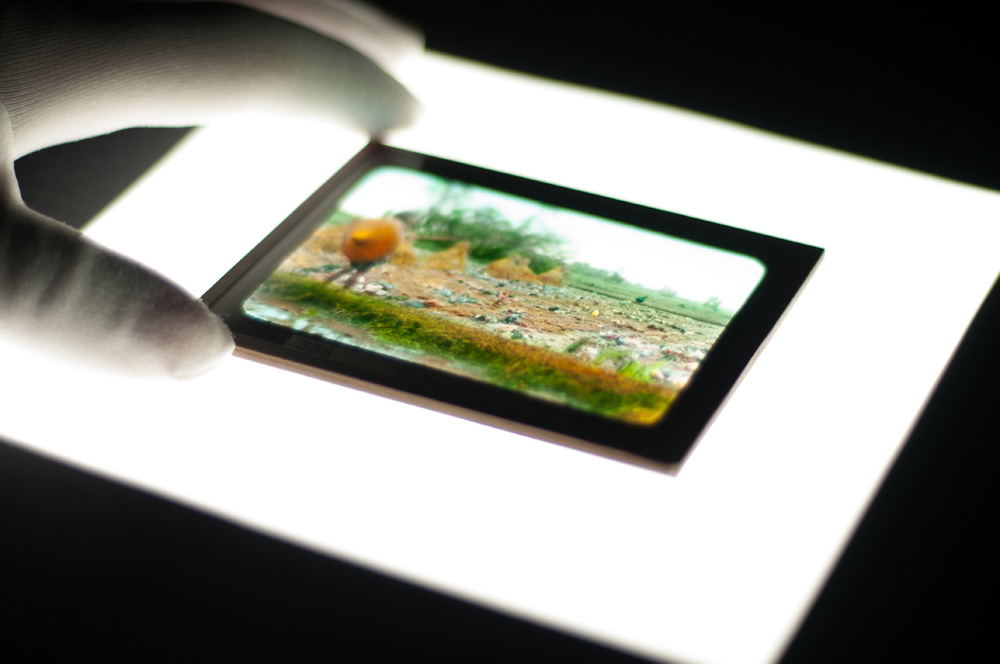 I have worked in the Digital Production Center since March of 2005 and I’ve seen a lot of digital collections published in my time here.  I have seen so many images that sometimes it is difficult to say which collection is my favorite but the Sidney D. Gamble Photographs have always been near the top.

The Sidney D. Gamble Photographs are an amazing collection of black and white photographs of daily life in China taken between 1908 and 1932.  These documentary style images of urban and rural life, public events, architecture, religious statuary, and the countryside really resonate with me for their unopposed moment in time feel.  Recently the Digital Collections Implementation Team was tasked with digitizing a subset of lantern slides from this collection.  What is a lantern slide you might ask?

A lantern slide is a photographic transparency which is glass-mounted and often hand-colored for projection by a “magic lantern.”  The magic lantern was the earliest form of slide projector which, in its earliest incarnation, used candles to project painted slides onto a wall or cloth screen.   The projectionist was often hidden from the audience making it seem more magical.   By the time the 1840s rolled around photographic processes had been developed by William and Frederick Langenheim that enabled a glass plate negative to be printed onto another glass plate by a contact method creating a positive.  These positives were then painted in the same fashion that the earlier slides were painted (think Kodachrome).  The magic lantern predates the school slate and the chalkboard for use in a classroom.

I am in awe of the amount of work and the variety of skill sets required to create a collection such as this.   Sidney D. Gamble, an amateur photographer, to trek across China over 4 trips spanning 24 years, photographing and processing nitrate negatives in the field without a traditional darkroom, all the while taking notes and labeling the negatives.  Then to come home and create the glass plate positives and hand color over 500 of them.  For being an “amateur photographer” Gamble’s images are striking.  The type of camera he used takes skill and knowledge to create a reasonably correct exposure.  Processing the film is technically challenging in a traditional darkroom and is made much more difficult in the field.  Taking enough notes while shooting, processing and traveling so they make sense as a collection is a feat in itself.  The transfer from negative film to positive glass plates on such a scale is a tedious and technical venture.  Then to hand paint all of the slides takes additional skill and tools.  All of this makes digitization of the material look like child’s play.

An inventory of the hand-colored slides was created before digitization began.  Any hand-colored slides with existing black and white negatives were identified so they can be displayed together online.  A color-balanced light box was used to illuminate the lantern slides and a Phase One P65 Reprographic camera was used in conjunction with a precision Kaiser copy stand to capture them.   All of the equipment used in the Digital Production Center is color-calibrated and profiled so consistent results can be achieved from capture to capture.  This removes the majority of the subjective decision making from the digitization process.  Sidney D. Gamble had many variables to contend with to produce the lantern slides much like the Digital Collections Implementation Team deals with many variables when publishing a digital collection.  From conservation of the physical material, digitization, metadata, interface design to the technology used to deliver the images online and the servers and network that connect everything to make it happen, there are plenty of variables.  They are just different variables.

Nowadays we photograph and share the minutia of our lives.  When Sidney Gamble took his photographs he had to be much more deliberate.   I appreciate his deliberateness as much as I appreciate all the people involved in publishing collections.  I look forward to publication of the Sidney D. Gamble lantern slides in the near future and hope you will enjoy this collection as much as I have over the years.