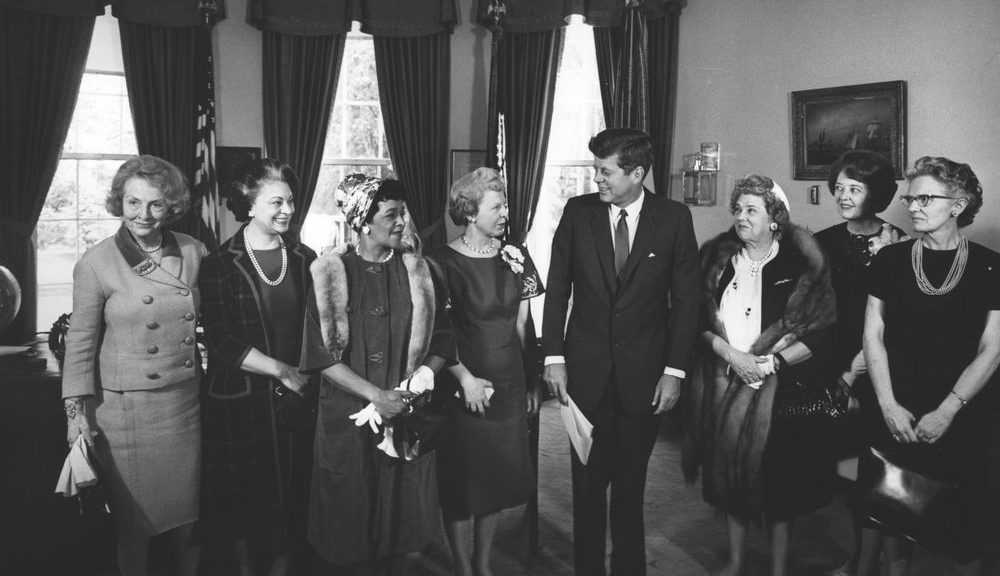 With the 50th anniversary of the moon landing right around the corner, I’ve been researching Duke’s history with NASA, the National Aeronautics and Space Administration. I’ve found a number of interesting stories, but I’ve been struck by the work of one Duke alumna whom I had not known about previously—and she’s a woman who deserves our recognition and thanks.

Eleanor C. Pressly, originally from the Charlotte area, received a master’s degree in mathematics at Duke in 1944. After working at Harvard, she served as an aeronautical research engineer at the United States Naval Research Library. She quickly became a specialist in rockets, particularly sounding rockets, which are unpiloted rockets that collect atmospheric data. Responsible for more than two dozen launches at the White Sands Proving Grounds in New Mexico, she was thought to have been the first woman to fire a rocket.

Her work was highly technical and time-sensitive. A 1956 article syndicated by the Newspaper Enterprise Association described her at White Sands: “With one eye on an anemometer, the other on wind reports coming in from balloons and on a crew of computers, she keeps a constant watch six hours previous to firing.” She was responsible for ensuring that the angle of the launch was appropriately calibrated to the weather, and if anything were to go wrong when it was in the air, she would pull the switch that would cause the rocket to self-destruct. Despite her serious scientific bona fides, the reporter could not resist describing her appearance in the article, too, referring to “… this youthful looking woman who gives the appearance of a happy housewife set for a round of afternoon bridge. She has bright blue eyes, blonde hair, and an infectious laugh.”

A 1957 article in the Washington Post and Times Herald claimed she was called “Uncle Sam’s Blonde Rocketeer.” It also connected Pressly to future developments in the space program: “Later this year, if the earth satellite is launched as planned and the world applauds the first ‘man-made’ moon, remember that a woman had a finger in it too. Eleanor helped on the original research to determine how long the satellite could be expected to remain aloft.”

When the Goddard Space Flight Center opened in 1958, Pressley became the head of the Vehicles Section of the Spacecraft Integration and Sounding Rocket Division. She continued to make improvements to the sounding rockets, developing several models of Aerobee rockets, and collecting atmospheric data.

In 1963, Pressly was one of six women, selected from nearly 600,000 female federal workers, whose “high achievement, outstanding contributions, and influence on major programs” deserved special recognition. The award was presented by President John F. Kennedy at the White House. Duke President Deryl Hart sent a letter of congratulations, to which Pressly sent a handwritten note. “Of course it was exciting, personally, to win such an award. But my big hope is that more girls in schools such as Duke can be made aware of the tremendous opportunities open to them. We need them.”

Pressly remained connected to Duke through giving, and even served as a class agent for the 1971-1972 Loyalty Fund. Pressly continued her work at Goddard, eventually retired from NASA, and she passed away in 2003. As we reflect on the fifty years since the moon landing, it is humbling to think about the massive amounts of research and testing that led to the fateful moonwalk—and the work that a woman educated at Duke contributed to that effort.