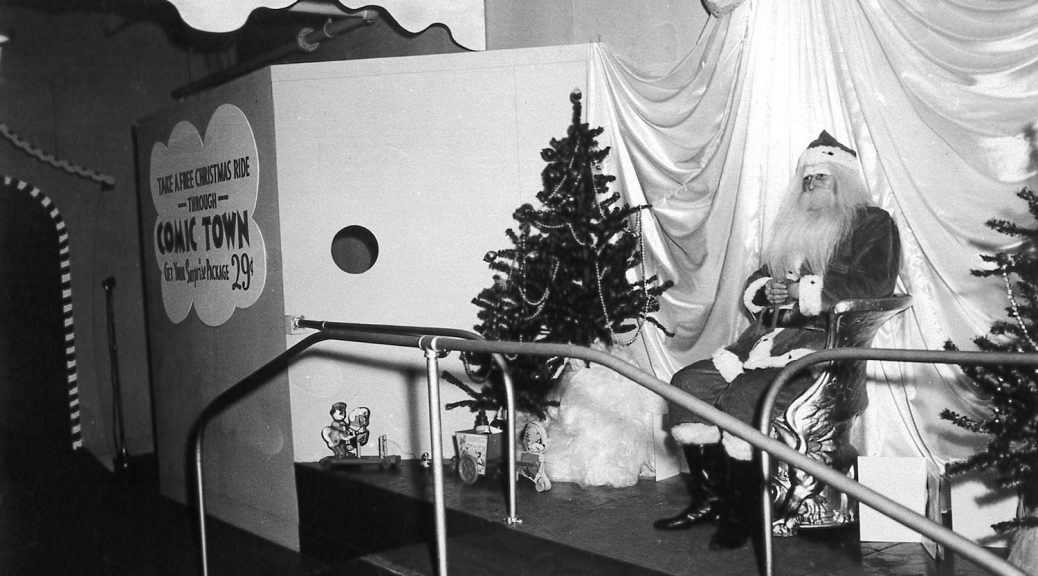 For many towns and cities in 20th century America, the holiday season officially began just after Thanksgiving, which was established as a fixed national holiday in 1941. Frequently festivities included a parade that involved local dignitaries, youth clubs, business and social organizations, a Miss Something-or-Other pageant winner, high school bands, fire engines, culminating in the arrival of Santa Claus in some ostentatious conveyance. Town folk stood in yards and sidewalks, sometimes for hours in freezing weather, to witness the spectacle. To this day, even, the Macy’s Thanksgiving Day Parade ends with the Santa Claus float.

Afterwards, Santa generally installed himself in one or several of the local department stores, meeting children, hearing their wishes, and sometimes posing for photographs. In all it was a wonderfully odd synthesis of folklore, consumerism, and technology. How did it begin?

It is generally accepted that Macy’s Department Store featured the first in-store Santa Claus character beginning in the 1860s.  Perhaps the first in-store Santa Claus that we might recognize, the rotund and jolly old man inspired by the stories of Washington Irving and illustrations of Thomas Nast, was James Edgar who posed as Santa as a promotional act in 1890 at his dry goods store in Brockton, Mass. The idea caught on and soon Santas were featured in department stores across the country. In the early 1940s, photographers and studios such as Art French in Seattle and Kiddie Kandids, based in the Midwest, began photographing Santa posed with children. What started out as a way to make money in what might otherwise be an off-season became a way to create mementos of childhood.

Recently the Hartman Center acquired a small collection entitled “Santa and Me!”, named for a promotional campaign conducted by Kiddie Kandids, a chain of photograph studios that apparently began in St. Louis and expanded to include over 2,000 studios located in major and regional department stores throughout the United States. The photographs, taken between 1946 and 1948, depict Santa with children on his knee, as well as some other themed settings such as Alice in Wonderland and the circus. There are also shots of Santa on a department store stage with the photographer’s booth hidden in a wall, as well as some images of how the camera was set up to capture the moment of Santa and child. Accompanying documentation describes how to conduct an “Operation Santa Claus” campaign: instructions on pricing; how to match the children to their photographs; distribution; how to set up the camera and process the flow of children. There are even recommendations on processing children through the experience: “This is a candid photograph and the children can be taken as fast as Santa wants to move them along. At the rate of 300 per hour, 2,000 to 3,000 is not unreasonable.”

This small collection provides a glimpse into an aspect of mid-century holiday celebrations and a commercial photographic practice that was only a few years old at the time. The collection is available at Duke’s Rubenstein Library and the collection guide may be viewed here.